Our "Over the Edge" guy Zach Maskell is usually happy as a clam, be it behind the wheel of just about anything, or would you believe, when he’s skating on ice, thick or thin. Well, it just so happens he recently got a chance to combine his two passions; trading in his hockey stick and skates for a steering wheel and studded tires; and go sliding around in some of Germany’s finest as close to a snow bank as he could get.

ZACH MASKELL: These schools are becoming a sport for manufacturers. One I can… get behind.

ZACH MASKELL: I’ve spent a lot of time this winter indoors most likely because it’s been abnormally cold, in fact I just found out I have a vitamin D deficiency, so we instinctively flocked to northern Quebec at Porsche’s Camp 4. While we will be outside trying to get some sunlight, we’ll also be spending the day inside some Porsches. 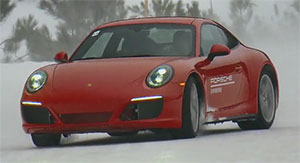 JONATHAN URLIN: Back about 15 years ago there was a media event to launch the all-wheel- drive system, the C4S, which became a media event called Camp 4 S over in Finland, it was such a great time everyone had such a wonderful experience that they decided to bring it back as a retail program, 15 years later here we are in our fifth venue across the world and in Canada the second largest internationally.

ZACH MASKELL: We’re armed with rear and all-wheel drive 420 horsepower 911’s, and some 718 Caymans… with 1.5 millimeter studded tires with the heated seats on max.

LORNE BANKS: “The first thing that we check when we get in a car is our distance from our bottom to the pedals.”

ZACH MASKELL: When the brake pedal is floored, you want a slight bend in the knee. Then you put your shoulders back against the seat… and make it so your wrists touch the wheel. This allows hand speed… once the you’re really pushing the car. 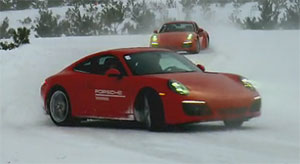 “Porsches traction management works closest with Porsche stability control aka PSM… I like to call it please save me. Because I can tell you numerous times on a racetrack.. it has done just that. Out here, we are turning that off, that way we get us some oversteer.”

LORNE BANKS: “So the beauty about an all-wheel drive, as we’re seeing, is as soon as we straighten the wheel, we can add power to straighten the car back out. Rear wheel drive we have to basically sit there with a lot of counter steer and wait.”

ZACH MASKELL: Like any school we start simple. So first we practice donuts on the skidpad, and figure out how to stay out of this situation. The dreaded understeer… when the car plows forward – and you don’t want it to. Then we move on to the slalom. We’re instructed to tap the brakes to get traction to the front wheels, then steer the car where we want to go.

ZACH MASKELL: “Perhaps the most important thing we learn today. Left foot braking. Even with all wheel drive we come into the turn. Flick. Add some brake that way we get more traction up front. Straighten out. And then we power out.”

We’re waiting for the car to rotate. While it may look hectic outside… everything inside is timing… and patience.

ZACH MASKELL: Work your way to Ice force and experience Turbo S’s and GT3’s on the ice. But first start at Camp 4… for a little over $4,000 - which gives you the basic two-day course… delicious meals and a room with a much needed fireplace. 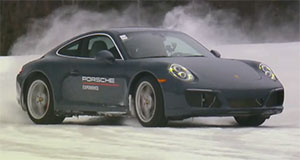 One thing that sets this school apart from others – was seat time. I was exhausted at the end of the day. While this is an amusement park for the sport car fiend… coming from someone who’s always felt the need to become a better winter driver… I promise you’d leave feeling the same way as well.

LORNE BANKS: That’s the whole idea behind the school right. Is to be comfortable driving a car sideways in slippery conditions.