While many of you may have never heard the term “professional cars”, you always know one when they see one, and they all serve great purposes, and always come with their own, personalized mystique. Well, Zach Maskell has found these original cars that are vital to keeping us alive… and the ones who transport us… when our engine… finally stops cranking.

ZACH MASKELL: There aren’t many places we haven’t been… sniffing out that beautiful gasoline fragrance. 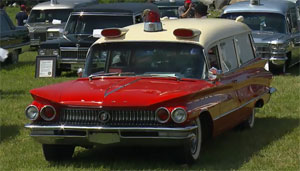 “This time we’re in Gettysburg, Pennsylvania, and we’re looking at over 100 first responders..”

“To the last responders. The professional car society is dedicated to keeping all these vintage ambulances and hearses just the way they were. This is their 40th anniversary and today we’re going to hear some cool stories from people that have been involved with these for quite some time.”

TONY KARSNIA: “The professional car society started back in 1976 when a small group of people decided that it was time to focus on having these cars earn their spot in the collector car hobby. There was a time when cars like this weren’t allowed at car shows and were shunned elsewhere as well.”

This is the largest club of its kind. The reason the folks here have their own story… is because no two cars are exactly the same.

STEVE LICHTMAN: “All of the vehicles I own. I actually know the history. Where it served, and in some cases I’ve actually met the people who worked on that particular ambulance. And even in one or two cases met people who were actually patients who were injured or ill who were transported in those ambulances.

You’ll see many Cadillacs, Lincolns, Buicks and Oldsmobile’s. But they never built Hearses or Ambos. There were body builders such as Superior, Miller-Meteor, and Flxible who custom built the required body on a mass produced chassis. This ambulance… was brought back from the dead.

“Oh no, it was a junkyard car. It was pretty badly rotted out. It’s showing its age with the paint work, it’s the only car I’ve ever painted in 40 years.” 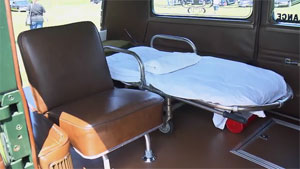 Until well into the 60’s, many of these vehicles actually did double duty…as both an ambulance and a hearse.

“You notice there’s like no room for equipment. So you asked the question about ‘what can you carry.’ A box of band aids. That was about it.”

“They wouldn’t even ride in the back with the patient. It was a ride to the hospital, that’s all it was.”

This man drove further than a hospital ride. Making a 500-mile trek from Canada, his Hearse was ridiculously stunning. 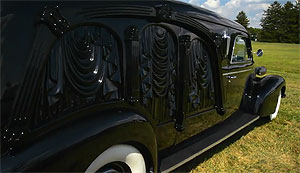 JOHN MCCULLOCH: “And it was a Freddy Flintstone special. It’s all wood framed underneath. And the wood was all rotted out of it.”

“The windshields were all smashed out.”

“It took us almost 10 years to restore it to this condition.”

“Inside, that’s a copy of the original. There was enough of the originals that I redid those myself. They’re all one sheet of walnut veneer. And then you had to router out the pattern and then you took a q-tip and wood bleach and bleach the lighter colors out.”

“On the outside of the car, it’s all cast aluminum panels that look like carved drapes.” 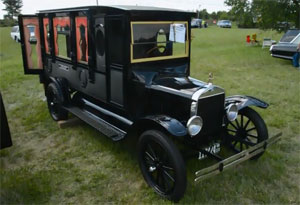 Once horse drawn hearse’s were being phased out… Henry Ford’s Model T was transformed. This one is documented… 100% authentic. You’re not going to see many of these.

JOHN MOREHEAD: “I’ve known about this particular hearse since I was about seven years old and just always liked it from the time that I saw it. A fella that owned it passed away and a couple years after he passed away, the family contacted me. So it’s kind of fulfilled a life-long dream to own this hearse.”

Perhaps it’s the adrenaline from a siren screaming down the road… or the hand crafted detail put into these vehicles. They’re all about saving and celebrating a life… I couldn’t define “beautiful” any better.

“So, if you’re alive out there it’s easy to see these people are dead serious about their hobby. If the hearses still give you the heebie-jeebies, I just want you to understand… that one day… we’re all going for a ride in the back of one of these.”