Owning and maintaining a bonafide racecar usually comes with a price tag that most of us mortals can ill afford. However, our over the edge guy Zack Maskell has found a way around this financial conundrum, and into the driver’s seat of his very own 10-second dragster…for only pennies on the dollar. 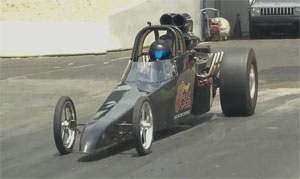 ZACK MASKELL: Race Camaros side by side, ride along in an 800 horsepower dragster, or bring your own car. All sorts of competition… this time… at New Jersey’s Englishtown Raceway Park. As for me, and a few dozen drivers… we’ll be tearing down the track in these.

“The dragsters that I’ll be piloting today have a 180 inch wheel base. They’re powered by 400 cubic inch small block Chevy’s, putting out over 500 horsepower. The cars weigh 1,500 pounds with the driver inside, so you do the math there. That’s connected to a 2-speed transmission… this is going to be awesome.”

“What are you looking forward to the most getting out of today’s event?”

JOHN GROCKE: “Just getting my feet wet and just getting used to going faster than normal.”

ZACK MASKELL: For as little as a couple hundred bucks, you too can polish your skills, qualify for an NHRA license, or simply feel the ferocity that Pure Speed Racing’s fleet of machines offer.

RALPH STRIGLIA: “I can tell you this. For one, it’s the most fun you’ve ever had with your clothes on. Number two, for the next few days. You’re not going to be able to wipe the smile off your face.”

ZACK MASKELL: Which was evident, before we even had to chance to drive. 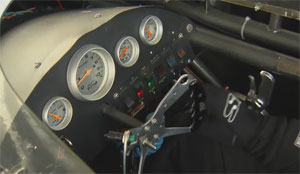 ZACK MASKELL: “So you’ve got your husband here giving you some encouragement?”

LISA LAVERONI: “Yes I do”

ZACK MASKELL: “And how did you find out about this?”

LISA LAVERONI: “He actually got it for my 49th Birthday”

ZACK MASKELL: “Couldn’t really ask for anything else could you?”

LISA LAVERONI: “No, it was the best birthday present I could ever get.”

ZACK MASKELL: “And you haven’t even driven yet, huh?!”

ZACK MASKELL: Pure Speed most likely pit stops at a track near you. 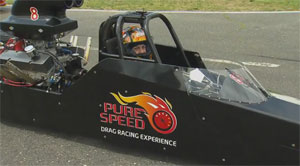 ZACK MASKELL: “You guys go all across the country then?”

AUSTIN KARDULES: “Yeah everywhere from New Hampshire to California and everywhere in between.”

ZACK MASKELL: Starting in 1997, Doug Foley realized there was a need for a drag racing school. Now his team… along with the cars they personally maintain… can put almost anyone 16 and older – with a driver’s license behind the wheel. Not to our surprise… we bumped into some frequent flyers.

ZACK MASKELL: “So you learn that you’ll kind of just want to guide it along rather than steer it?”

GREG DEDIAN: “Exactly. The car wants to drive itself. All you’re doing is, you’re almost going along for the ride, but you’re just giving it a little nudge here and there, and the car will pretty much go straight on down broadway.” 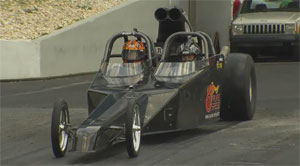 ZACK MASKELL: “Do you know what your best time is that you’ve gotten out here?”

ZACK MASKELL: “Not too shabby. I was expecting to only hit 10 seconds today.”

GREG DEDIAN: “Well if you’re quick off the line you may beat 10 seconds.”

ZACK MASKELL: Before it was my chance to beat Greg’s time, we got to watch some touching moments. Some riders with visual impairment, or hearing loss for instance… can also let 800 horsepower suck them into their seats.

DOUG FOLEY: “We cater to all people. As long as we feel like it’s safe conditions. We had somebody who was fairly short today. As long as I can get him in the car and know that, God forbid, there was an accident or anything, that his safety conditions are up to standard, then I’m fine with it.”

ZACK MASKELL: Time now… to keep my head back… and pin it to win it. Our first run we go to the 330 foot mark. The second… 660. And for this final run… the full quarter mile. First we drive through some water… a quick burn out cleans the tires. Now, we’re ready for launch.

So maybe a drag racing career is in my future after all.