As automakers launch more and more electric vehicles, folks eager to reduce their carbon footprint might think that ditching their current car and buying new is the only option. But, our Over the Edge guy Greg Carloss has found another way of plugging in to the EV movement. 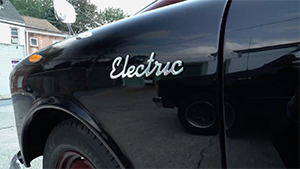 GREG CARLOSS: Whether it’s stereos or turbos, the automotive aftermarket has conversion kits for just about everything. But, what if you want to turn your gas guzzler into an EV? Well, here at ampREVOLT in Lancaster, PA, they specialize in clean conversions. Twelve years ago, Brandon Hollinger was just a musician driving a gas-powered car to and from gigs.

BRANDON HOLLINGER: So I was looking for alternatives to the basic internal combustion engines and diesel engines, that we were forced to use basically…

GREG CARLOSS: So Brandon decided to convert to electric. And, with two SAAB 96’s and zero automotive background, Brandon went where everyone goes for expertise: the internet.

BRANDON HOLLINGER: I stumbled upon some very key YouTube videos...and after six months of research and about three months of building, I was driving to work every day reliably.

GREG HUNT: Some of these vehicles that have this lower power like this are really great because you can get them around town you sort of already had the vehicle and it’s like gonna have its second life now.

BRANDON HOLLINGER: We were approached by a young fellow to do an electric van for him but as a solar educator he was adamant about having solar involved.

GREG CARLOSS: Using these roof-top panels, this soon-to-be camper can actually charge itself, providing about 150 to 180 miles of driving range. But they added DC Fast Charging capability for a rainy day. In their conversions ampREVOLT has begun using components salvaged from OEMs like Tesla. But repackaging the batteries presents a problem, so they designed and patented their own battery box.

BRANDON HOLLINGER: They slide in like drawers, and there are features in there that allow you to build up and also build out.

GREG CARLOSS: They can even mount to a wall for stylish in-home power storage. Speaking of style, Brandon has his award-winning Austin FX4 London Taxi charged and ready to roll. Sure, it doesn’t offer the smooth ride, sharp handling or even borderline-unnecessary acceleration of the latest EVs, but it still achieves the same goal. Zero driving emissions.

BRANDON HOLLINGER: Going with an electric vehicle is a start, but going with electric vehicle that doesn't rely on anything new to be built or minimal new parts, is even better...combining the two vehicles seems to be, without a doubt, the most conscious thing you could possibly do.