Home » Features » Over the Edge » Ripsaw

Let’s say the money tree in your backyard is thriving. Some of us would plan a whirlwind vacation, some a new mini mansion, but our Zach Maskell… he would be designing a grand garage. One with enough room for his cars… boats… and his tank??...so he can go over the edge and far beyond. 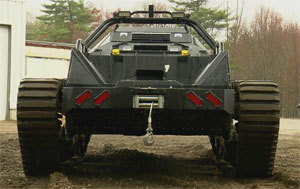 ZACH MASKELL: If I’ve ever seen a machine that will punch me square in the face and steal my lunch money… it’s this one.

“Today we’re playing with the fastest dual track vehicle ever produced. It can do 65 miles per hour, and it goes 300 miles on one tank of fuel.”

Coilover suspension, matched with air shocks allow for 13 inches of travel. Sure, you move around… but compared to any other off-road vehicle I’ve driven, it’s a magic carpet ride.

“Behold the Ripsaw EV2. Made by Howe and Howe Technologies. You might recognize it from Fast and Furious 8. This one, is just a little bit different. In the car world, think of it as an exotic. However, it’s built in Waterboro, Maine.”

That’s EV2…for Extreme Vehicle number Two! And, It’s the brainchild of a pair of Twins, who were always the ones mixing chemicals and experimenting in the back of class. 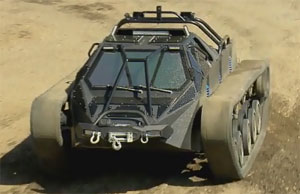 ZACH MASKELL: They hand build other wild machines too.

This… is a robotic firefighter… aka “Thermite.”

And this. Is the Rip Chair.

“It allows people that are paralyzed to get out in the woods. To go hiking, fishing, hunting, and do all the stuff that we can still do.”

“What we do here is we build really, the world’s most badass vehicles.” 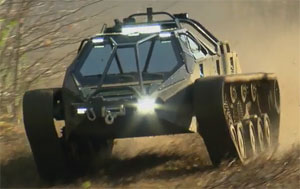 MICHAEL HOWE: “To have a tracked machine it has to be fast, it has to be lightweight. We’re not building a slow, cumbersome machine. We’re building a fast, agile, attack machine.”

ZACH MASKELL: EV2 is the civilian model of their Ripsaw… MS, or Military Spec version. The U.S Army has been testing them for use in battle. The EV includes the same military spec engine, suspension, and tracks. They tell us they build 4 or 5 of these “luxury tanks” each year.

“We got an LCD screen. We have air conditioning. I see speakers in here.“

“So honestly I thought I was going to be juggling a bunch of different things, but we have a gas, we have a brake, and we have a steering wheel? 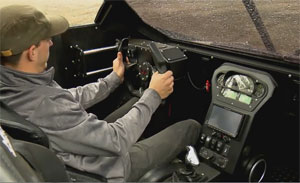 “That’s pretty much it.”

“Alright, right on. How do we fire this thing up?”

“Now what you’ll find is nice gentle movements to where it’s at.

ZACH MASKELL: After a few minutes behind the wheel… I found the sweet spot in the steering. Just a bit is all you really need. The rest is all throttle control.

“This is the 6.6 liter Duramax Turbo Diesel which has 700 horsepower and just about double that in torque.”

ZACH MASKELL: It’s the same engine you can find in many Chevy and GMC pickups and vans.

Snow, mud, sand. It doesn’t matter. The Ripsaw is not scared.”

“One of the coolest things about the guys at H and H is they’ll do just about anything that they’re allowed to, to make the customer happy. We have the old “Ejecto Seato” button… and we also have the sasquatch lights to really illuminate anything you want to see under the moon.”

We went stealth mode… and turned on our infrared camera… but we don’t think it was sasquatch. 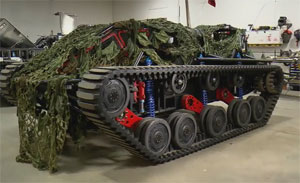 The boys weren’t kidding. This is the next stage in their lineup. The SSR. Built strictly for speed. Double the power of the EV2… for about 100 grand more than that 400,000 dollar machine, I was piloting.

ZACH MASKELL: “Did we get some air?”

“Yeah you got some air!”

ZACH MASKELL: As for trying out the ejection seat… I’ll just leave that to your imagination.