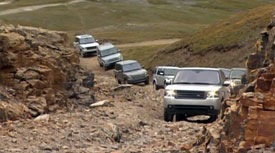 In the 1880's, miners traveled from Telluride, Colorado across the San Juan Mountains, blasting through rock to find gold and silver. What formed were roads, if you want to consider them roads, along the Imogene Pass and Black Bear Pass, over 13,000 feet high of twists, turns and full of gravel, rocks and boulders.

In 1989, Land Rover recreated that journey across the Great Divide. As Rover's Bob Burns put it, "If you were afraid of heights before, you wouldn't be after this."

BOB BURNS: You don't know where you're going, you just see the road drop off the end of the earth, and then the next stop – downtown Telluride.

Fast forward to 2010. Land Rover was back in the San Juan's to show off the new Range Rover and LR4 for part of the Land Rover Colorado Experience. They brought MotorWeek along for the ride, and as an off-roading novice, I knew it was be an adventure I'd never forget. 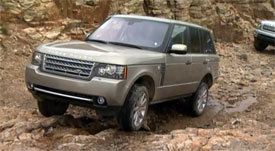 There's no guard rails on these roads because during an avalanche, the snow just knocks them down anyway. That's the easy part of our journey, this afternoon, we tackle Black Bear Pass. The San Juan Mountains are known for some of the most heart-wrenching, off-road courses in the world. Land Rover chose this portion of the Rockies because it shows off what extreme terrains their vehicles can handle.

BOB BURNS: I think most of the terrain is more intimidating from the driver's standpoint, you know, the shear drop-offs. The road, in most places, is one-vehicle wide. So, the terrain is pretty tame for the vehicles, but for the drivers, they really have to pay attention.

Over our two-day, 80-mile trek, there were only 14 miles of actual paved roads. The rest is 120-year-old mining history. We climbed down boulders, up huge rocks, through water, and sometimes a little bit of all three at one time, but thanks to Land Rover's experienced instructors guiding our every step of the way, they made me look like a pro.

BOB BURNS: Using the terrain, what little bit we have, is critical that the car move and get in position when we get to the end of our terrain. If we get there and we're out of position, then getting into reposition. 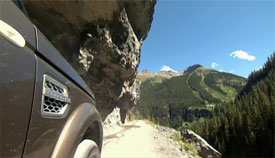 The instructors are not only experts in off-roading, but they know these vehicles inside and out. That includes the more-than 25 computers associated with the LR4 and Range Rover...providing the driver with as much information as you can get on the terrain, drive mode and surface area.

BOB BURNS: We'll go to the home page, and I have an access that shows me the differentials. When they look in real time, it'll show the tires articulating as we go along.

The drive was, to say the least, interesting at an average speed of five miles an hour. After two days of talking about it, we finally made it to Black Bear Pass -- edge of your life switchbacks and two wheels teetering on moving rocks -- all while trying to stay on the course and not fall 13,000 feet down. MotorWeek has traveled the world over, testing our skills at torturous Land Rover driving events for decades, and we're still amazed at all the wilds their vehicles can conquer.

STUART SCHORR: For more than 20 years, Range Rover and Land Rover have sort of defined off-road, adventure and experience all around the world, from the Camel Trophy, G4 Challenge, to blazing new trails through the Amazon, the Siberian Jungle, but especially here in Colorado.

And that was true for me as I really went to the extremes on this adventure.