Home » Features » Over the Edge » Scotland Gran Tour In A Bentley

Scotland Gran Tour In A Bentley

Overseas automotive press trips are usually run and gun affairs. Hop on a plane, drive the car a bit, catch a few winks, and back home again. But, this time the invite promised a more elegant motoring experience. So, we dispatched our Over the Edge guy Zach Maskell across the pond to do some genuine grand touring.

ZACH MASKELL: I know a few guys and gals who head to some of the most gorgeous places on earth… and are stuck… in meetings… all day. Errr. No thanks. In fact, I don’t think you could pay me enough to do that. But if you want me to drive your car line… with the wind in my face, on roads unknown to me, for the peanuts that I feed myself with – well then you’d have yourself a deal.

“Grass. Plaid. Bagpipes. Castles. Ok… I’m sorry that was terrible. We are in Scotland and we are driving British made Bentleys. We could not be in a better car right now to tour the country.” 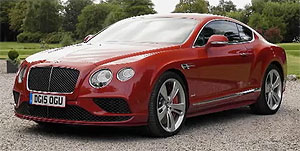 The Continental GT. It’s available in coupe or convertible with three different engines producing up to 626 horsepower. It takes some time… ya know… getting acclimated with driving a right hand drive car… on the left side of the road. With some of them as slender as they are… we stuck out like sore thumbs… creeping through small towns as we made our way around the Highlands. We kicked off not far from Glasgow, and while nothing in between was boring… stopping in Glencoe where “James Bond: Skyfall” was shot… was perhaps my favorite location. It’s one of the only stops where visitors seem to pay more attention to the scenery… than what we were driving!

PAUL JONES: “You can draw a Continental with three lines. The flowing roof line, the power line off the front wheel arch and that powerful rear hunch. So the cars got real presence. What we’ve done with 16’ model year is we’ve sharpened the appearance of the car. New front bumper, new front fenders, new smaller rag shell. So the car’s really hunkered down on the road and looks very purposeful coming towards you.”

ZACH: This is the first Bentley to enjoy large volume production. Buyers around the world enjoy the bespoke process that goes into each vehicle.

“Around 55,000 GT’s have been produced since 2003. Each one, built mostly by hand, takes over 100 hours to produce. Back in the 1900’s that was not the case whatsoever. They were in very limited production. Luckily for us we’re going to a very special place and we’re going to get to see some of those cars.”

This is a big deal. The Concourse of Elegance – it’s an invite only affair.

“Ahh yes we have arrived at the Holyrood Palace and for some reason… they gave MotorWeek a pass.”

You’ve heard of big shows in the states like “Amelia Island” and “Pebble Beach”… well all these shows complement each other very well… but this time we’re walking in the gardens of the Queen’s official residence when she visits Scotland.

RICHARD CHARLESWORTH: “To be ranked alongside Pebble Breach which is the best of the lot is a great accolade and just shows how this is rapidly growing to being one of the most influential concours in the world in such a short time.”

ZACH: This is only the UK’s fourth international Concours and it’s already receiving quite a bit of attention. It’s for good reason too, some of the rarest cars in the world are here. And they’re being driven to and from the show. Check out this R-type… the supercar of its day.

RICHARD CHARLESWORTH: “This was the Bugatti Veyron on the 1950’s. It would’ve cost in pounds around 740,000, so more than a million dollars. So this was in supercar territory at the time, and that’s why all 218 owners were extremely well known individuals.”

ZACH: And I also got to see, in person, one of the most well-known Bentleys. Facing threats of the Mercedes Compressor in the 24 hours of Le Mans in the early 1900’s… Bentley needed more fast… that’s when something wild… came about. 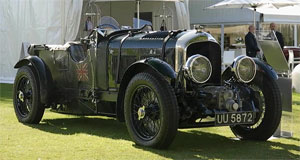 “Oh yeah. Come check this thing out.  This is the Bentley Blower team car. W.O Bentley himself actually did not want this thing to be made. He did not like forced induction. If you’ve ever heard the phrase “there’s no replacement for displacement,” he’s the one that crowned that. Why? Because he says forced induction made the car unreliable. Well he was right... even though this car was super-fast, it did not finish the Le Mans race in 1930.”

I asked how much this car’s worth… and the number I got amounts to “priceless.” You can bet this one will never leave Bentleys hands. As for many other owners in the show… I feel like they have the same feelings about their prized possessions.

So this all goes to show… even overseas it’s easy to feel “at home” when you’re surrounded by people who would rather die by the sword…than give up their machines.