For most road racers, losing traction is the last thing they want. But for a select group of rubber slaying enthusiasts who keep constant control of a car… that appears to be out of it – that’s what it’s all about. Our Over the Edge guy Zach Maskell stays sideways as he spends his day drifting away.

Drifter: “Burnt Rubber…gasoline…roars of V8’s…And like, a good vibe. You don’t really hear it, but it’s there. You can hear everybody talking and having a good time.” 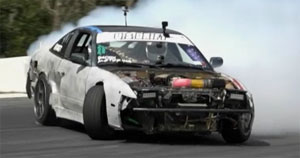 ZACH MASKELL: “In drifting, the driver uses the throttle, brake, clutch and gear shifting, along with steering to keep the car in a constant oversteer situation… just like that…Today’s going to get rowdy.”

Opposite lock they stay… at Charlestown, West Virginia’s Summit Point Motorsports Park… about two hours west of Washington D.C. Helping us understand this madness is a man who ranked 25th in Formula Drift in 2015. F-D has professional drivers from all over the world.”

ZM: First of all… what would one need?

DAN SAVAGE: “You can come into drifting with a $3,000 car as long as it’s rear wheel drive and it’s manual.”

ZM: OK… then how to get the thing sideways?

DAN SAVAGE: “There’s definitely several different ways to do it. The more novice would be go straight in and just jerk the wheel and the car hopefully will step out. There’s other techniques as far as… going as fast as you can into it and ripping your emergency brake. There’s another one where you can go in and almost… upset the car and then push the clutch in and out and just jolt that driveline and really drive the tires.”

ZM: “After that – it’s all about holding your speed and angle. Rapper was pumped to give us a ride in his Nissan 240sx… with barely 100 horsepower as opposed to his 800 horsepower pro-car. With such little power… you’ve really got to focus on fundamentals… and use momentum in your favor.

DAN SAVAGE: “I think it brings the joy back to it. I gave my 86 year old grandma a ride back in the day and you just saw her little mitten hanging out the window just having a blast… if you leave today with a frown… it’s your fault.

ZM: “That initial feeling when you first get sideways, nothing else compares to this. That’s exactly why this is so addicting. It’s a constant adrenaline rush.

You’ll see a lot of Nissan 240’s and older 3 Series BMW’s. You’ll also see engine swaps. Like the SR20-DET… a Turbo charged four cylinder. Of course, the very Popular V8’s. And the inline 6 turbocharged 1JZ-GTE is glorious bouncing off the rev-limiter. Rocking a 1J himself… a driver who’s never missed an event in NINE years.

DAVID BELLOMO: “You want to be passionate about a sport – but you have limits and rules in other sports. And this is a sport like freestyle. Like motocross or skating and once I get out there and I rip the E-brake I can do it my own level as hard and I want to do it, as rabid as I can. 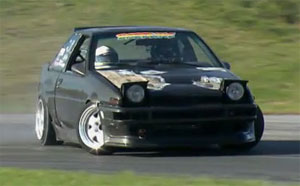 ZM: Drifting is all about consistent speed… the line you take… and angle. Summit Point has tracks for beginners… and professionals. On this day… at “Drift Nirvana’s 100 Drifters of December”… it was all about practice… and keeping it fun and safe.

DAN SAVAGE: “It’s just a companionship between friends and people you don’t even know. If you like the way the car looks, you say ‘hey your car looks awesome while it’s drifting. Or like ‘hey yours looks like crap but you’ve got that heart. And that’s what people share.’”

ZM: If you’ve never been into extreme sports you might not know the feeling, but it’s been a heady day at Summit Point. High fives all around, drivers sharing parts… your friends pushing you to be better. While this is still motorsports – it feels alien. Like nothing of the sort exists. And once you understand why that could draw certain people to it. You just might begin to understand drifting.