Home » Features » Over the Edge » Supercars on State Street

From Amelia Island, Florida, to Pebble Beach, California, and just about every city and town in between, when it comes to car shows, America is easily the greatest country on earth. And, for this one, we go over the edge with Zach Maskell as he drives passed the “road closed” signs, for a super car…super cause!

ZACH MASKELL: Before we slide past road blocks, we’ve got to make it there first. So, we’re fueling up less than an hour outside of Harrisburg, Pennsylvania. Well over 100 cars line this suburban neighborhood’s street, making you question if there’s some kind of car chase movie being filmed.

“My boyfriend said we were going to breakfast so we turn the corner and I see all these cars line up, it’s like absolutely amazing I’ve never seen anything like it before.”

ZACH MASKELL: The “lineup” is for the annual Super Cars on State Street car show benefiting The American Cancer Society! But, before heading to the main event, these folks are catching up with new… and old pals.

KEVIN WOLVERTON: “So it’s people from all works of life. It’s people who have a shared interest in cars, and then to get together and have the social aspect of it. Everybody likes checking out the rides, but then having some free food, getting together to chat with people and make new friends is one of the most important parts of it.” 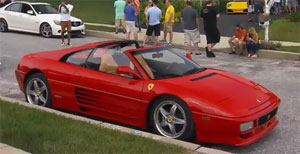 ZACH MASKELL: In addition, this is the fourth year Kevin has sought contributions from his friends for the American Brain Tumor Association. Last year he brought in close to three-thousand dollars, and matched it. And the neighbors? They seem just fine with this breakfast gathering.

JAMES RUTHVEN: “It’s pretty exciting to come out. I like to show my boys the other side of life and see the fast cars, the nice cars in the world.”

JAMES RUTHVEN: “Which car do you like better? Do you like the American muscle or the German sports car?

“Well that one looks a bit cooler than that one.”

“Ah ha, so we have and American fan. The winner is the Mustang. Good choice, bud.”

ZACH MASKELL: With a belly full of eggs and bacon… it was time to caravan up the highway, and bring the noise to Harrisburg. With the police on our side, 400 vehicles paid to display their cars… in front of the state capitol. “In 2011, young Evan Ross wanted to find a unique way to comfort his friend Sarah, whose mother died of breast cancer. Now, six years later, participants come in and contribute a minimum of $40 towards a cure.”

ZACH MASKELL: This go-around… Super Cars on State Street managed to raise 15,000, and a total of $40,000 since the events started.

RHYS MYERS: “I know people come from all over the east coast, and I think every year it grows and grows. Because everybody recognized it’s such a great cause.” “My mother died passed away of cancer. So it’s sort of near and dear to my heart.”

ED ROSS: “The first year we only had State Street shut down and we had about 60 cars show up. It was supposed to be just a one year, done, event. We surprised Sarah that year. She didn’t know we were doing this for her. She showed up at the end of the day and we presented a check to her in memory of her Mom.”

ZACH MASKELL: Both Sarah and Evan, can’t thank everyone enough.

EVAN ROSS: “It’s something that we’re both really grateful to do. I know that she enjoys seeing the community side of it. And so do I. And for me, the car side of it is always my passion. So – she loves it.”

ZACH MASKELL: And everyone… loved the cars.

ZACH MASKELL: “So for some people a stock Lamborghini Gallardo Superleggera just isn’t quite enough. So the owner sent this to Underground Racing where they strapped on two turbos, that made it 1800 horsepower and in half a mile, it does 221 miles per hour… yes please.”

SUNIR GHOSAL: “It’s just a fantastic machine, very fortunate to be able to drive it, most people would never drive it on a day like this but we turned the boost down, we’re having a little bit of fun and just enjoying driving the car.”

ZACH MASKELL: So, cheers. To all who took their super cars out in the rain. And especially to Sarah and Evan… for showing us all how to make memories…...make a real difference.