Home » Features » Over the Edge » Taste of Italy

There are few events where you can show off your car one day and drive it around a race track at triple digits speeds the next, not only that, but we're talking about rare Italian exotics and sports cars. Well our Steven Chupnick  has found just that up in the Pocono Mountains in Pennsylvania. So buckle up, we're going over the edge...

STEVEN CHUPNICK: There is nothing like a gathering of Italian cars to bring out the best of the best...from Ferrari to Lamborghini, Maserati, Alfa Romeo and yes, even Fiat. The 2011 Le Belle Macchine d’Italia had all that and more. This year, the weekend long road fest took place at the Mount Airy Casino and Resort in Pennsylvania’s Pocono Mountains. 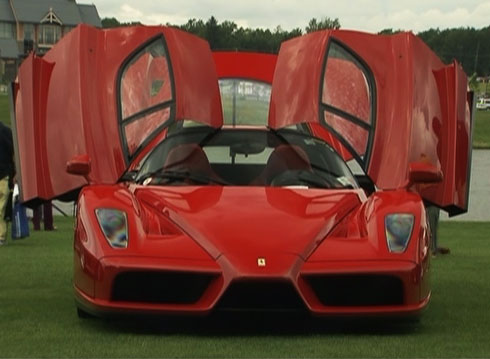 One car that caught our attention right away – this 2003 Ferrari Enzo. I think I know which one I’m taking home tonight, that is, if my photographer doesn’t mind walking. And boy, do I have good taste! With a V12, 660 horsepower engine inside, it took home top Ferrari honors at the show’s Concourse d’Elegance.

EDUARDO MANASCE: The looks, the performance, the ability to take it to higher limits of driving and performing on the race track, it comes very easy.

STEVEN CHUPNICK: It was doubly as nice for Eduardo - his F40 came away with a win as well. These owners and fans are passionate about their vehicles – not only are they meticulous on the interior and exterior, but their wardrobe must match as well...these men and women came decked out head to toe. But it’s about the passion and excitement of showing off their stylish rides that has everyone coming back year after year.

BOBB RAYNER: It’s an event that brings together, not a single mark of Italian cars, but all encompassing Italian cars.

STEVEN CHUPNICK: And it wasn’t all pure Italian either. Some cars with an American essence showed up, too - like the Cadillac Allante. The bodies were built and painted in Italy, and then air shipped to Detroit on a special 747 for final assembly. So this flying Italian Cadillac had the distinction of being built on the world’s longest assembly line.

JOHN MONZO: You know, it was made by Pininfarina, so it has that Italian flare to it, that’s why we enjoy the cars.

STEVEN CHUPNICK: John was intrigued by the story of how a Cadillac - with a 4.5 liter, 32 valve V8 Northstar engine - became an Italian crossover.

JOHN MONZO: And they do have that sports car ride, even though it’s a luxury car. What we kind of like about them is it’s actually a full-size car with only two seats.

STEVEN CHUPNICK: And Steve Waldie brought something weird and rare to the show - his Lamborghini LM002, a truck originally designed for military use...which has the same power as his 1989 Countach – a V12 engine with nearly 450 horsepower.

STEVE WALDIE: Well, they built 301 of them; they originally built for the Saudis to run across the desert with – hence the big fat tires. Very hard to drive, very heavy clutch, but they’re cool...301 in the world, so you know you’re the only one out there that has one.

STEVEN CHUPNICK: The Le Belle Macchine d’Italia was definitely a spectacular site on the golf course...but the real fun came the next day at the track...nearby Pocono International Speedway, where Italian performance overtook style.

How many times do you get to drive on an official NASCAR track in your own personal car? That’s what these guys get to do and that’s what makes this event so unique. And, when it came time to drive, this car fest turned into an around the world tour...the Italian car club allowed anyone to join in the excitement at Pocono from Americans, British, German and more. Everyone took to the tricky triangle to flash their goods and bad.