Home » Features » Over the Edge » Trabant

Here at MotorWeek, we test all kinds of vehicles – from the practical to the outrageous. But the truth is:  Very few of these cars will stand the test of time and become classics.  Our latest ride is a model that achieved icon status long before MotorWeek went on the air, but as our Steven Chupnick explains, it's a classic for many of the wrong reasons!

STEVEN CHUPNICK: When we head to the track, we choose our cars based on their performance pedigree.  And as you can see, this lineup packs some serious punch.  But this year, after a call from an old friend, we decided to add a surprise contender.

STEVEN CHUPNICK: It’s an icon of the automotive world, but not because of its performance…or luxury features… or classic styling. Actually it’s hard to explain, so let’s ask the man who owns it, former MotorWeek Head Writer, Martin Peters. 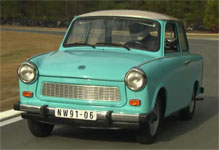 MARTIN PETERS: I became interested in Trabant’s when I was with MotorWeek, and I was in Germany working on a Porsche special was on the Autobahn and a 928 GT we borrowed from the Porsche factory and I wanted to see how fast I could make the car go. I think it was supposed to be able to do 165 and I wanted to see that. So, I was watching the speedometer creep up 160….161….and I see a couple of trucks coming up on my right, in the right lane. And I thought to myself, geez should I lift out of it now, or should I just stay on it? And I said I’ll stay on it, I wanna see how fast this thing will go. So just at that moment this little car comes trundling out from between the two trucks, and it just changed my world. I stood on the brakes as hard as I could, the ABS was working, it was doing everything it could, but there was no way I was gonna miss hitting that car. And then finally the driver of the car looked up and he saw me and trundled back over between the trucks. And the thing that surprised me was I didn’t know what kind of car it was I was looking at. It was a Trabant.

STEVEN CHUPNICK: The Trabant was produced in East Germany for more than 30 years, beginning in 1957; more than 3 million were made.  But it was only after the Berlin Wall came tumbling down that the Trabi became known in the West.  As thousands of East Germans flooded across the border, their funny, smoky little cars were quickly abandoned and soon became notorious as a punch line for the fall of Communism. But, just as quickly, the Trabant achieved icon status when rock band U2 featured the cars in their worldwide Zoo TV tour for the 1991 album “Achtung Baby.”

MARTIN PETERS: I bought it from a guy who had purchased some cars from Germany and had them shipped from Germany in a container.  And one of them was a wrecked Porsche 935 race car, and when he went to open the container he found two cars inside he hadn’t plan on and they were both Trabant’s. Apparently they were put in the crate as, in the container, as packing material. It was all sort of a joke. He had them sitting around his garage and he told me about them, and I realized at that moment I need to buy one of his cars.

It has a two cylinder two stroke air cooled engine. It measures about 600 cc’s, makes about 27 horsepower. It’s quite slow; it’s not fast by anyone’s imagination. The shifter is a little bit unusual. And it’s a four speed H pattern just like you would imagine a shift pattern being, but you have to get used to shifting on the column. The restoration was done by Birchwood Automotive Group in Ohio, and it was not too difficult to find the parts we needed because in East Germany and the former eastern European countries there are still a lot of these cars around. One of the things that make this car enjoyable to maintain and continue owning is that there is a large group of owners who are willing to share their knowledge on online forums. There are even a fair amount of people in this country that own Trabant’s and help you when you are in a crisis and you need some parts or you need some advice.

STEVEN CHUPNICK: One man’s junk is another’s treasure, and Martin has come to appreciate the underdog nature of this once discarded orphan.  Not only has he given the Trabant a new lease on life, he’s taken it from zero…to hero!