Downsizing engines in order to save fuel can deliver a drive we’re not exactly fond of. So, many smaller mills are adding a turbocharger. But, that can still leave a lack of torque at low rpm. Borg Warner Turbo Systems set out to solve this problem, with their own e-booster. Let’s go over the edge with Zach Maskell to see how an electric compressor may finally kill-off dreaded turbo lag.

ZACH MASKELL: Outside of Ashville, North Carolina… we’re driving a 2015 Eco-boost Mustang… with more power than its V8 counterpart. That’s thanks to a bigger turbo and this secret weapon from Borg Warner. 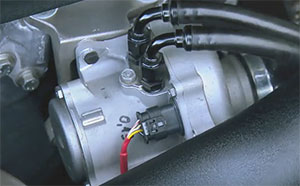 The EBooster is a separate, all electric compressor that forces the engine-fed turbo to spool faster… giving you near instant power. Think of it as a supercharger for the low RPM’s… or as a twin turbo set up where one smaller turbo spools the bigger one. Or like the “turbo” button in a video game.

This Mustang is a demo car… to prove what this “Ebooster” could do in an aftermarket application. So, don’t whip out your credit card… just yet. This is the only one running around… for now.

“Our first OEM launch is going to be with the Mercedes-Benz S-class in the coming model years, something we’re really excited about that’s going to allow us to give the customers the drivability of a much larger engine in a much smaller, more fuel efficient package.

“So as opposed to a regular supercharger… this one is not using the engine… therefore we’re not losing any power?”

“Yeah exactly. This is a small electric motor. This one is 5 kilowatts. It spins to a peak speed of around 70,000 RPM. Since its electric we can mount it wherever, and we can activate it on demand… so it’s really boost on demand.” 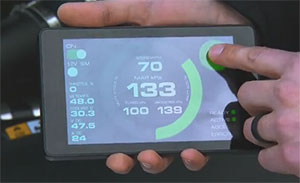 The Ebooster pushes 7 psi into the engine. With air added instantaneously… more fuel is burning… which means more energy for the big turbine to do its thing.

“It’s no secret you can put a larger turbocharger on a small engine to make big power numbers. Hot rodders have been doing that for ages. But when you do that, you lose the low end torque. And throttle response that most drivers demand.”

The Ebooster is active only for a few short seconds until the turbo catches up. This 48-volt system uses a battery the size of a shoe box… and can recharge during mild brake regeneration.

“There’s a whole bunch of gear heads that work in Borg Warner, definitely in the turbo system business unit. We’d all love to see this come to the aftermarket because I think we all have a project car we’d like to see it on.”

F1 cars use a similar system. Hobbyists have tried for years to combat the problem of turbo lag…

“So right there it took a little bit for the turbo to spool up and really kick in.”

“You get the classic big turbo power band as soon as it takes off, you’re going like a slingshot. But before that you’re kind of waiting.” 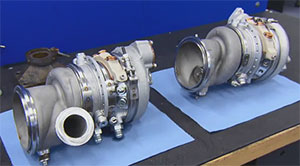 Turn it on, and it pulls and pulls from the get go. Say you’re in a cruising gear… on the highway. Normally you’d have to downshift… or wait. Here, the Ebooster cuts the time to torque in half.

The car makes 410 horsepower and 450 pound feet of torque. Yet, still exceeds the stock torque curve at all engine speeds. Like the V8, the power feels linear and delivery is smooth.

Located after the intercooler, the booster receives cooler, denser air. And, once it’s done its job, a valve closes… and all that air is filtered to the turbo.

“I’ve got to admit I was a bit skeptical when I first heard about this, but it is the real deal and whether you’re a car person or not, you will feel the difference.”

“Best of both worlds… power and fuel economy.”