The 50th anniversary of the Vietnam War is being commemorated by numerous events across the land. And, one of the biggest military rallies is highlighting vehicles from that era that most Americans will still recognize. So, let’s head back in time with Zach Maskell as he goes over the edge… with some of our nation’s bravest.

Besides the men and women in uniform, these camo machines were vital to the entire Vietnam operation. This Maryland gathering gives you a feel for the importance they served. 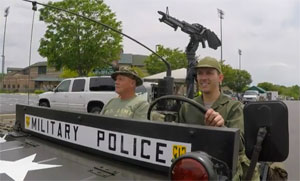 “We are at the 43rd annual East Coast Military Rally, not far from Aberdeen Proving Ground. And some of the vehicles that are here are so rare, that only a handful exist.”

Andy here won last year’s Best in Show. That’s why his 4x4 made it on last year’s shirts. Not only is this a place to show off your pride and joy, but it’s also a sellout flea market.

ANDY TALLY: “It’s a good place to find part for your vehicle you can’t find anywhere else. Sometimes you find something you’ve been looking for, for years. Especially if you’re working on some oddball vehicle which my other ones are where they only made 50 of them.”

ZM: One you’ll recognize, they made thousands of.

It was the successor to this Willy’s. And it drove much better. I could feel the different immediately. ‘A’ arm coil springs were added to the M1515-A2, and it corrected the roll-over problem. 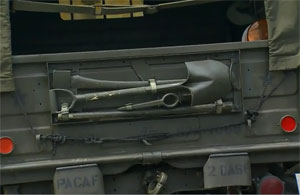 “These are motor pool vehicles. They are not straight out of the factory. What the judges are looking for on here is additions that the soldiers would’ve done out in the field. What type of climate are they dealing with, what type of terrain? On and on. So for instance this antenna would’ve been installed in the field. Along with radios, seat covers, and a bunch of other stuff you see on here.”

Judges are not only making sure everything works, but motor pool vehicles must appear like they just left the battlefield.

RALPH BENNETT: “This is called a contact maintenance truck. It’s basically a mechanics service truck…It’s sort of like a AAA truck for the army.”

ZM: Ralph had a truck identical to this in his unit. His is 100-percent fully functional, with a generator, welder and any tools he’d need in the field. Using it in conjunction to his aircraft recovery job, he’d often be flying in a helicopter.

RALPH BENNETT: “Next thing I knew, I was hanging under the Huey at 800 feet.” 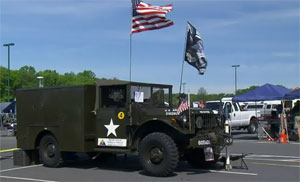 ZM: This time, the machine gun broke off its mount, which Ralph was holding on to, and he fell out with it. Luckily his gunner had strapped him into the aircraft.

ZM: Not only did he enjoy sharing some hilarious stories, but we quickly found his enjoyment of the truck reaches deeper than we imagined. Inside his tool boxes, are signatures of living vets.

RALPH BENNETT: “Last year at the show, a guy after talking to me signed the truck. His wife was standing behind him. She started crying. I said ‘What’s the matter?’ ‘That’s the first time he admitted that he was in Vietnam in 50 years.’ She thanked me because maybe now he can open up and start living again. It’s kind of been my way to enjoy life now. Especially talking to people and telling them about the truck and what we did over in ‘Nam and the good parts of it.”

ZM: Kids love asking Ralph about his truck. And he says they have good questions too. But he’ll agree with an event officer… that the attendance is shrinking.

SCOTT JOHNSON: “Some of the older members are dying off and were not replacing the people with the younger generation. We’re trying to figure out how to solve the problem but the interest isn’t there.”

ZM: The next time there’s a show like this near you, go check out how things used to be, and live through the men and women who risked their life so you could be here today.