Years ago, the rubber that got you from A to B was… shady at best. From summer to snow tires, we just hadn’t figured it out yet. But nowadays tires are one of the MAIN ingredients to the entire recipe. So, time now to “chill” with Zach Maskell as he DANCES Over the Edge… in freezing temperatures.

ZACH MASKELL: While we humans look pretty similar… we react differently in certain situations. Just… like… tires. To show you what I mean… it’s off to Indiana… on campus of Notre Dame’s Fighting Irish.

“This is a hockey puck. It’s made of rubber. I’ve been around it all my life and I understand what it’s going to do on the ice. Car tires…I don’t have as much experience. After today, I’ll tell you: you might think twice about your all-season tires.” 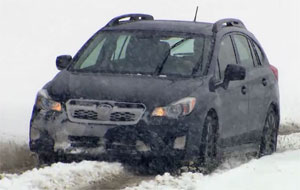 I’ve been through snow in a little bit of everything. Front, rear, and all-wheel drive vehicles. All equipped with different tires. It’s stunning how they’ve got different personalities.

JUSTIN HAYES: “We like to say, if it’s cold enough to see your breath, it’s time to start thinking about putting winter tires on.”

ZACH: Isn’t this “cool.” A drag race… where hockey players are normally ripping each other’s heads off. One car… equipped with OEM all-season tires. The other… is equipped with Bridgestone Blizzak, winter tires.

“This may be the most boring race in history. But the results… will be pretty interesting.” 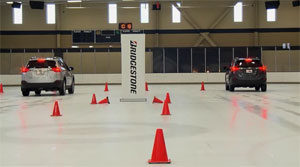 One can barely get moving. Then when it finally does… it’s tougher to stop. But why was the other one doing so well? Because it has the same tires that this… tricycle has.

“You may not realize nature is the world’s foremost engineer. So what the folks at Bridgestone did was actually studied Polar Bear paws to see how it grips the ice. Then they discovered how to put their multi-cell technology in their Blizzak tires.”

There’s three basic components in a Blizzak. Deeper tread depth… a big blocky pattern… and the compound. The multi-cells act as a sponge to disperse water… working along with bite particles to grip the ice. Ok… time now to get in two all-wheel drive SUV’s and see what happens.

“Let’s see how these all-season OEM tires do. We’re mashing down the gas… the traction control is trying to help us. Down on the brake as hard as we can… and we still slid pretty good.”

Eh, I gave that run the cold shoulder. Now for the properly equipped ride. 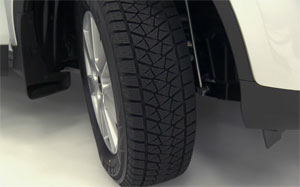 “Already the Blizzaks are getting a lot more traction. Hard on the brakes… Hopefully we’re consistent there. 12.4 Miles Per Hour… 24 feet stopping distance. That’s exactly what we were looking for. That means we stopped about half a car length quicker than the all-season tires. When we’re talking about lower speeds like this… that is very good.”

So obviously at higher speeds… this could be a priceless SAFETY investment for your family.

WOODY ROGERS: “We find that people that buy and try winter tires for the first time, it’s a revelation. They didn’t realize how much control and confidence they have from behind the wheel.”

ZACH: Winter tires are not only good for snow and ice… but the rubber compound will stay softer than all-season tires below 45 degrees… meaning you accelerate… handle… and brake easier. This is kind of a no-brainer at this point isn’t it?

WOODY: “A lot of consumer’s think about the cost of a set of winter tires. Typically it’s not much more or often less than the cost of their insurance deductible. If in one winter season you avoid one small fender bender in traffic, you’ve paid for the winter tires.”

ZACH: Around Thanksgiving may be a good time to mount them up… and tax season is about the time they need to come back off. Remember… work smarter… not harder.