Home » Features » Over the Edge » Young-N-Drifting

It’s been said that it takes 10-thousand hours of practice to become a master in any discipline. Well if that’s true, a master drifter will have spent over a year of their life going sideways in a car. Well this week our Greg Carloss slides Over the Edge with a young drifter who’s getting an early start on his 10-thousand hours of hooning. 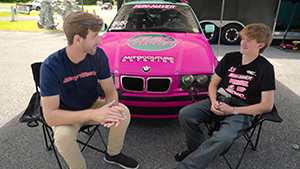 GREG CARLOSS: Before they get their driver’s license most teens are practicing basic skills like merging onto a highway or parallel parking… But this kid? He’s a little precocious.

For the most part, Rhys Conklin is your typical 15-year-old. He goes to high school and mows lawns to save money for his car. Of course, his car is an LS3 swapped E36 purpose-built for drifting. Crazier still, he’s been behind the wheel since he was 11.

How did you trick your parents into letting you do something like this before you can even legally drive?

RHYS CONKLIN: Yeah, I would say, uh-- I’d say it’s more of a convincing. It was definitely a-- a time trying to get them to believe in me, but as soon as I gave them my ideas and my process of what I was trying to do, um, they believed in me and the one thing that they came back with, I need to have all A’s and B’s in school.

JASON CONKLIN: When Rhys came to me and said “I want to drift cars” I was a little, like, wow, you’re 11 years old. But he—he has a true passion for it and, lucky enough, we’re able to help him with it.

RHYS CONKLIN: So, I really started from the beginning. I had to learn the basics of a manual car. I had to learn how to come off the clutch. So that was where I started was just having to drive the car around the parking lot.

And then from then I just went on to doing donuts and figure 8s, trying to get used to transitions with the figure 8s. Ever since then it's just been coming up to where we are now. So, doing tandem driving. Yeah, I’ve learned lots.

GREG CARLOSS: And Rhys has learned from the best. 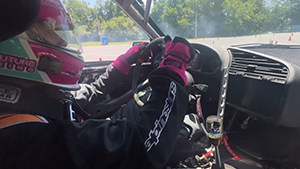 VAUGN GITTIN JR.: Man I’ve known Rhys Conklin since he was three years old. His dad used to come and, and detail my vehicles. And Rhys would always be there helping out with a rag. Always had his hat on.

Rhys is just an unbelievable person all the way around. But his driving skill is-- is very impressive. Rhys is without a doubt going to be a serious threat if he continues on his path and continues putting that passion and effort into chasing his dream.

RHYS CONKLIN: So I’m at the ProAm level now, but my main goal is to get to the pro level and that’s where Vaughn is and the whole FunHaver team-- that’s where they are. So, I’d say that’s the next step.

GREG CARLOSS: But any pro will tell you, a driver is only as good as their team. 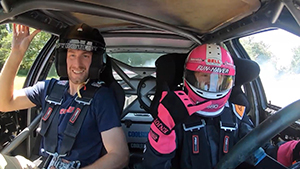 JASON CONKLIN: Our family is our team and our-- and it’s brought our team together, our family closer together so if there’s one thing this has been amazing. My wife Amy, she handles the logistics, she handles track entries, insurances. My daughter Brielle, she handles, uh, she’s Rhys’ spotter. She’s his eyes and the voice in his ear. And she also handles social media. And I’m pretty much, I’m the driver, transporter, mechanic, whatever I can do to fill in the gaps.

BRIELLE CONKLIN: Being Rhys’ sister is very exciting but it’s also very tiring. We’re constantly traveling and going to events, shoots, all that kind of stuff.

In the driving aspect I don’t really have to put him back in his place but for social media sometimes, you know, he does 15-year-old things and I’ll have to be like “we’re not posting that, Rhys.”

AMY CONKLIN: Actually, I’m pretty calm when he drives. I know his personality is pretty laid back and I’ve been in the car with him and have seen him drive first hand in the passenger seat so he’s very smooth, um, so it’s not really too stressful for me actually.

GREG CARLOSS: If Rhys’ mom is so casual about her son drifting a 415-wheel-horsepower race car, surely, I have nothing to worry about riding shotgun right?
He’s a lot better than me at driving.
Judging by his performance, Rhys should have no issues getting his driver’s license next year… that is, if he can resist the urge to rip the e-brake.