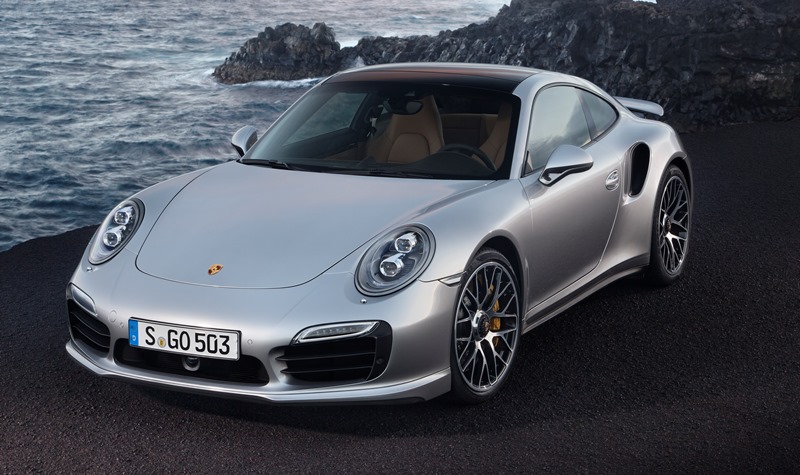 2014 is the 50th anniversary of the Porsche 911, and for much of that time it has served as the global benchmark of sports cars. Part of that reason is that Porsche never lets the 911 sit back and enjoy its accomplishments, at least not for very long. Porsche designers are constantly working towards an ever higher performance goal for the 911. So, it is appropriate that this is also the year for the latest 911 Turbo to hit the streets, and from our initial outings, it does appear a new level of street-legal performance has been reached.

Unlike previous generations of the 911 Turbo, with the latest 991-series, both Turbo and Turbo S models are available at the same time. As per tradition, the S adds more standard equipment and more power, this time for a 3.8-liter twin-turbo flat-6. The Turbo ratings are 520-horsepower and 487 lb-ft. of torque, while the Turbo S hikes those to 560 and 516. In addition, up to 553 lb-ft. of torque is available at full throttle from the overboost feature that is a part of the popular Sport Chrono package.  All in all it makes the Turbo S the quickest road going production Porsche ever with expected 0-60 times of under three seconds. That’s getting into performance motorcycle territory.

But, as impressive as that straight line speed sounds, what really makes the 911 Turbo shine is its handling and agility. Both are aided mightily by the fact that all Turbos continue to include standard all-wheel drive. The current system is an evolution of the torque vectoring setup with an added Electro-hydraulic control that enables more power to be delivered to the front axle faster.

In addition, the new 911 Turbo gains rear wheel steer. With an actuator for each back wheel, the system provides varying degrees of steering to both tighten turns and increase high speed stability. Not only does all this electronic based hardware provide an astounding amount of grip, but it does so without entirely dialing out all of the driving enjoyment. As for bringing all this fun to a halt, the Turbo’s standard ceramic brakes are up to the task and then some.

When it comes to a transmission, the Turbo is PDK automatic-manual only. The PDK’s shifts are incredibly quick, and it makes street driving in every day traffic very livable.

Like previous 911 Turbos, the body lines are accentuated by being wider through the rear quarters, with enlarged air intakes, and serious oversized wheels. Full LED headlights provide bright-as- day nighttime illumination on Turbo S. Along with a movable rear wing, comes a new inflating, extendable front spoiler that together, raise down force to new levels.

Let’s face it, only a chosen few sports car enthusiasts can afford the 2014 Porsche 911 Turbo. But that doesn’t mean you can’t experience it along with us. We invite you to come along as we test this magnificent automobile on MotorWeek episode #3324 which begins airing nationwide on February 15, 2014. For a complete listing of the public television stations that broadcast MotorWeek, go to motorweek.org and click the “About The Show” tab at the top. MotorWeek is also seen Tuesday evenings on the Velocity cable channel.

The 2014 Porsche 911 Turbo simply exceeds all rational expectations. Yet, we know it will hardly be the last of the line. Still, this 911 Turbo seems to be a special treat and it’s not just because of an anniversary. Although, it is crystal clear to us that this car’s performance is golden.