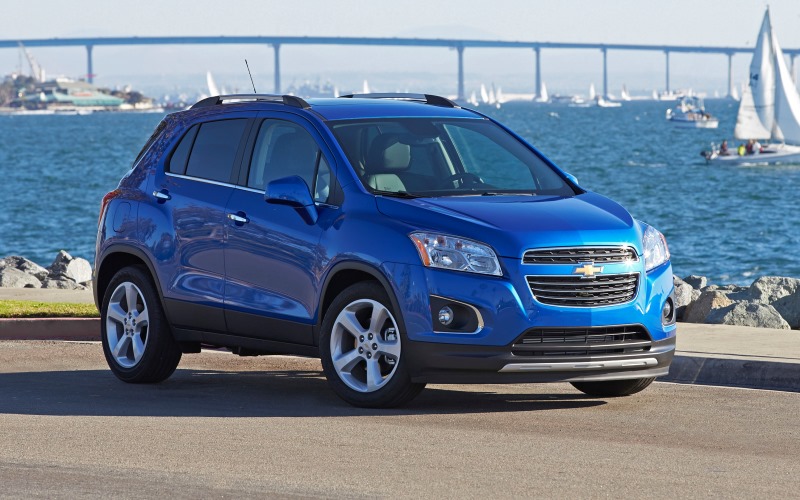 Sport utility vehicles are coming in ever more shapes and sizes these days, so love them or hate them; they’re not going away anytime soon. In that vein, the subcompact 2015 Chevrolet Trax plays into the really small crossover segment, one that most experts think is ready for explosive growth.

While most tiny-ute efforts so far have been luxury oriented like the Mini Cooper Countryman and Buick Encore, more mainstream brands are now joining the downsizing.  Mechanically, the Trax is pretty much a clone of the Encore, including front-wheel-drive being standard with all-wheel-drive optional.

With a wheelbase of just 100.6-inches, an overall length of 168.5-inches, and a front track of 60.6 inches, the Trax a tidy package. It’s easily Chevy’s smallest all-wheel drive model.

As to styling, all of the current Chevrolet design cues are here; dual-port grille, smooth body sides with rounded fenders, and a gently sloping rear with well integrated spoiler that extends down the sides of the back glass, and stacked tail lamps. It’s a smooth design with plenty of curves, a fairly aggressive stance, and enough glass for fine visibility.  Body lowers are covered in plastic with simulated skid plate’s front and rear. 16-inch wheels are standard, with the top trim model getting 18-inch alloys.

Power comes from the same engine used by the Chevy Sonic; a 1.4-liter I4 turbo with 138-horsepower and 148 lb-ft. of torque, attached to a 6-speed automatic transmission.  Also borrowed from the Sonic is a MacPherson strut front suspension, with a compound crank torsion beam under the rear.

The all-wheel-drive system is a fully automatic on-demand unit, only sending power rearward when slip is detected. Curb weight is as much as 3,300 pounds with all-wheel-drive.

On the technology front, the Trax is fully up to speed with a 7-inch MyLink display in the center stack, Siri Eyes Free connectivity, standard keyless entry, and optional remote start. Like all newest GM’s, OnStar 4G LTE with built-in WiFi is standard, as is a back-up camera; though navigation, by way of the BringGo app is optional.

The instrument panel is more Sonic than Encore with a large, round, motorcycle style tachometer on the left, and a rectangular digital display right for speed and more. The 3-spoke steering wheel has nicely integrated controls, and the overall fit-and-finish of the interior is fine for a mass-market price point. 10-airbags are standard, including rear seat-mounted thorax bags.

Both leg and knee room were adequate for two adults, but the Trax will never be able to replace a true family utility. A full complement of three in the rear seat would be uncomfortable for all parties involved. Up front, however, there’s a good amount of room, but seats are narrow and you sit very upright. Rear seatbacks fold 60/40, and the front passenger seat folds flat as well for longer items.  So, think of the Trax as more of a tall, around town, all-weather replacement for a small hatchback car.

While lower gas prices are cooling demand for fuel efficient vehicles, when they do go back up Trax families will appreciate a Combined Government Fuel Economy rating of 29 MPG for front-wheel drive, and 27 MPG with all-wheel drive.

For a complete roadtest of the 2015 Chevrolet Trax, be sure to catch MotorWeek episode #3419 that begins airing on January 10, 2015. For a complete listing of the public television stations that broadcast MotorWeek, go to motorweek.org and click the “About The Show” tab at the top. MotorWeek is also seen Tuesday evenings on the Velocity cable channel.

Morphing the successful Buick Encore into a more modestly price Chevrolet Trax is a great idea. But the best part is that GM has left the Buick Encore’s impressive competency fully intact.  The Encore was a much bigger hit than expected, so Trax will certainly generate even higher expectations.  And, we think the Trax is off on the right track to fully meet them, lower gas prices or not.