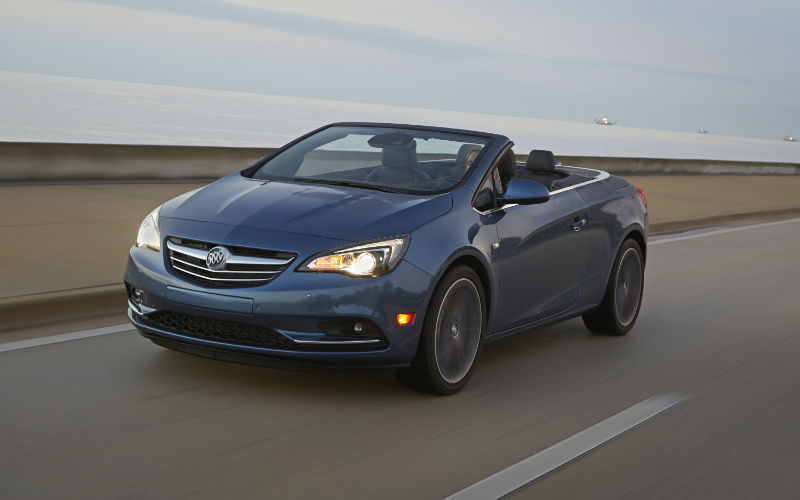 For the 2016 model year, Buick once again enters the convertible market with the all-new Cascada. Sleek and sophisticated, the Cascada looks ready and willing to deliver high style motoring in traditional European grand touring style. That makes sense since it’s really a slightly domesticated version of the German-designed Opel Cascada that’s been on sale over there since 2013.

The styling is flowing from all angles, with wraparound headlights, and less grill-work than other current Buicks. Wing-shaped LED daytime driving lamps and steeply raked A-pillars add some signature flair. The rear is equally smooth and curvy with a subtle deck lid spoiler and large 1-piece tail lights.  And since those taillights lift with the trunk lid, there’s a 2nd set inside for flashing in emergency situations.

With that trunk open, you’ll also find a great 13.4 cubic-ft of storage space.  Even when the top is down and stowed in the well-designed holding area, 9.8 cubic-ft. of space remains.  There are also folding seat backs for even more utility.

The passenger space is a mixed bag. On one hand there’s lots of hard plastic. On the other are features like automatic seat belt presenters found on much pricier droptops. The overall appearance is classy; with good room up front, yet only so-so seat comfort. Access to the rear seat is also quite good, but room is tight for adults. Soft top operation is one of the best designs we’ve seen lately; with quiet, smooth, and quick operation by a single switch.

Cascada power is GM’s Ecotec 1.6-liter I4 turbo. It provided an adequate amount of motivation around town with 200-horsepower and up to 221 lb-ft. of torque. A 6-speed automatic transmission is standard.

We found ride-and-handling characteristics very dependent on whether the top was up or down, and the state of the road surface. Top-down on smooth roads; it’s all great. Drive more aggressively, and despite a Euro-stiff ride, it can start to feel a little flabby. Putting the top up seems to bolster solidity, and even pushed hard we were fairly impressed with its speedy response, minimal weight transfer, and overall firm, neutral feel.

For our exclusive test of the 2016 Buick Cascada, be sure to catch MotorWeek episode #3537 that begins airing on May 20, 2016. For a complete listing of the public television stations that broadcast MotorWeek, go to motorweek.org and click the “About The Show” tab at the top. MotorWeek is also seen Tuesday evenings on the Velocity cable network.

The 2016 Buick Cascada has little direct 4-seat drop-top competition in the U.S.  The VW Beetle and Mini Cooper convertibles are way too small, while Ford Mustang and Chevrolet Camaro convertibles are too identified with the “muscle car” arena. The Volkswagen Eos is perhaps its closest rival.

With pricing that starts under $34,000, we think the 2016 Buick Cascada is a refreshing addition to a market that is almost dry of premium-look, four-seat convertibles. Now, with the summer upon us, Cascada looks set to make a perfect splash.