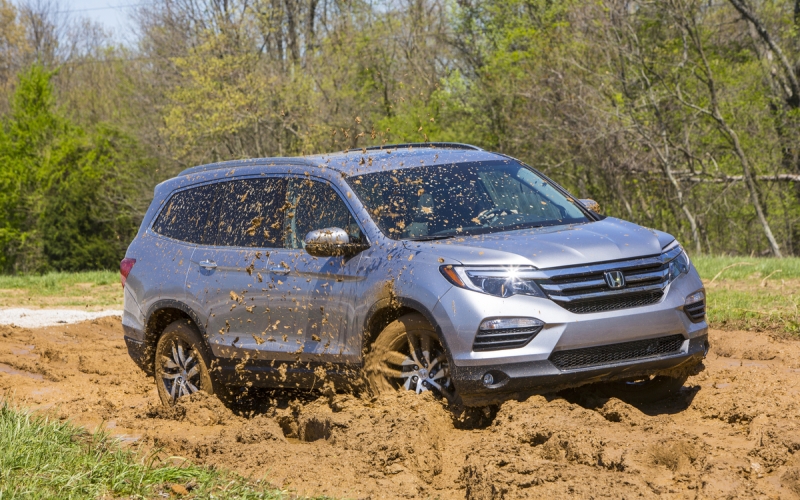 For an unprecedented second month in a row a Honda vehicle is our MotorWeek Car of the Month. In May it was the fresh from the ground up Honda HR-V subcompact crossover utility that garnered our undivided attention. Now, this month, we turn our gaze to a new take on an old favorite, the mid-size 2016 Honda Pilot.

It’s probably safe to say that there aren’t too many American neighborhoods where you won’t find a Honda Pilot shuttling kids from one place to another. In just 2 generations the Pilot has become a big seller among three-row crossovers.

Still, the all-new 2016 Honda Pilot is the brand’s most ambitious crossover utility to date. When the outgoing Pilot arrived for 2009; we, as did many others, gave Honda grief over its old-school, boxy shape.  And perhaps, looking back, it was a little unfair, as now that Pilot has a more modern and rounded shape, it looks like every other crossover.

All the necessary elements are there for a contemporary exterior design including 20-inch wheels, a first for Honda, and L.E.D. lighting all around. Wheelbase is longer by almost 2-inches while length grows by 3 inches, yet weight is down by about 300 lbs.

Driver visibility has also been greatly improved. Acoustic side glass helps keep noise down, though not quite to luxury-car levels.

A glass panorama roof is available, another first for the brand, but instead of a single panel like many others, its still two separate glass panels. This design, Honda says, allows the DVD screen to remain in an optimal ceiling mount viewing position, while also retaining roof cross bracing for better rollover protection.

Indeed, being a family hauler, above average occupant protection is a huge selling point, so there’s an all-new crash structure, along with LaneWatch camera, automatic braking, and lane keep assist.

Just about every modern accoutrement you expect can be found in the new interior. The new Garmin-based navigation system is another huge improvement. The new climate panel works well, but most controls for everything else flow through the touchscreen. However, one thing we miss is a real speedometer for reference. Speed monitoring is by digital numeric display only.

Access to the 3rd row is another improvement, with one touch 2nd row sliding and a wider opening. Heat is also available for those in the 2nd row.

Even base Pilots are 8-passenger with a 2nd row bench seat.  But more significant is the 7-passenger walk-through version with 2nd row captain’s chairs for the first time.

The same variable cylinder management 3.5-liter V6 provides power. However, like Honda’s 4-cylinders, it’s now direct injected and therefore gets an Earth Dreams logo as well as a slight boost in muscle. Totals are now 280–horsepower and 262 lb-ft.

A 6-speed automatic transmission is standard, but Touring and Elite trims come with a new 9-speed transmission. Auto stop/start also comes with the 9-speed, but it can be easily switched off. Honda claims fuel economy with the 9-speed is best in class.

Traditionally very capable off-road, the Pilot gets a new all-wheel-drive system, and while you can no longer manually lock anything, electronically controlled driving modes will now do the work for you.

For our exclusive test of the 2016 Honda Pilot, be sure to catch MotorWeek episode #3442 that begins airing on June 19, 2015. For a complete listing of the public television stations that broadcast MotorWeek, go to motorweek.org and click the “About The Show” tab at the top. MotorWeek is also seen Tuesday evenings on the Velocity cable network.

We don’t have to be clairvoyant to predict that the much improved 2016 Honda Pilot will surely be one of the top selling three-row crossovers in no time at all.  As usual, Honda knows exactly what their customers want, and finds a way to deliver it to them, time and time again.