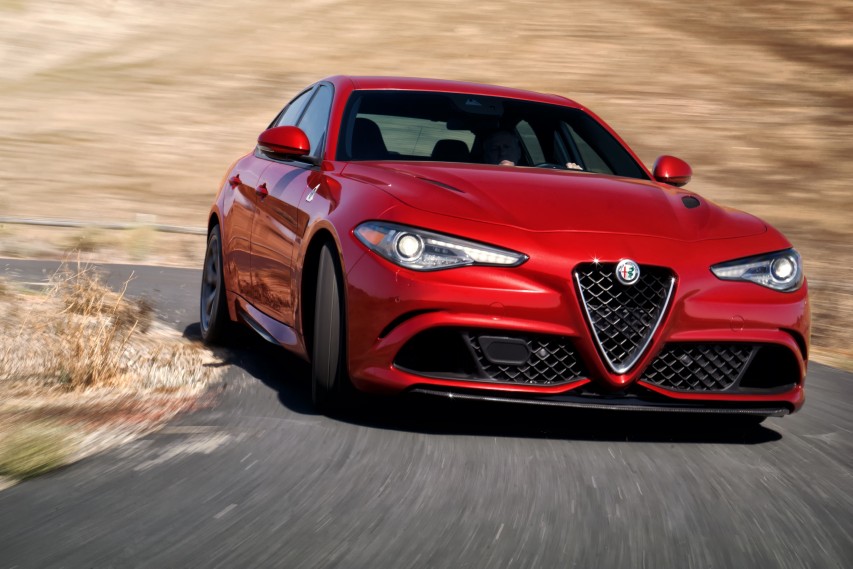 While it has only been a year since Fiat-Chrysler showed the U.S.-spec Alfa Romeo Giulia sport sedan at the Los Angeles Auto Show, there have been rumors of its imminent arrival here for quite some time. Well, that wait is finally over. The 505-horsepower Quadrifoglio is the initial model, followed by more sedate and insurable versions in early 2017. But, to us and everyone else that test cars for a living, the big question remains, can any Italian luxury-sport four-door standup against a Teutonic wall of rivals?

Following the mid-engine 4C debut in 2014, Giulia is the company’s second serious step back into the American market. One thing is for sure, the Giulia comes out ahead of all rivals in the “looks” department. Indeed, the Italians seem to have a flair for style and styling, and the 2017 Alfa Romeo Giulia is rolling proof of their talent for beautiful designs.

You know at once it’s an Alfa, with a front fascia theme that dates back to the 1950’s. But, today’s Alfa artisans have given the central shield, whiskers and sleek lighting a totally modern stance.

Down the side, a deeply sculpted character line maintains the car’s simple elegance, along with the fender vents and historic 4 leaf clover badge on the top-performing Quadrifoglio. In the back, light clusters highlight its width, with quad exhausts nestled in the rear diffuser.  It’s one fast sculpture even standing still.

This premium compact sedan is rear-wheel drive and is built on an all-new platform.  When it comes to models there are three flavors:  A 280-horsepower turbo-4 is standard on the Giulia and Giulia Ti.  While the Quadrifoglio we drove sported a 505-horsepower 2.9-liter V6 bi-turbo derived from corporate partner Ferrari. Alfa says it’s the most powerful production car engine they’ve ever built, and our initial testing has made us believers.

Our first driving exposure showed us that Alfa is laser focused on maintaining a true driver’s car experience. This four-door simply handles as beautifully as it looks.

On the other hand, the cabin is roomer and more comfortable than it looks, with abundant Italian detailing, especially in the leather and accent stitching.  The steering wheel is inspired by Formula-One racing, with a red engine start button serving as an exclamation point.

For our complete test of the 2017 Alfa Romeo Giulia, be sure to catch MotorWeek episode #3617 that begins airing on December 30, 2016. For a listing of the public television stations that broadcast MotorWeek, go to motorweek.org and click the “About The Show” tab at the top. MotorWeek is also seen Tuesday evenings on the Velocity cable network.

It is much too early to tell if the 2017 Alfa Romeo Giulia will pose any serious threat to the overwhelming volume of German sport sedans that are sold in this country. We doubt that will happen. But, to us, and we suspect many others, just like Italian exotic sports cars, the exclusivity of owning this utterly captivating Alfa Romeo Giulia will be its own reward.