Maybe it’s the price of gas or maybe it’s just good common sense. Regardless, small cars are hot with the most action in the subcompact class. Once considered entry level econo-boxes, the latest subcompacts are dynamic, roomy, full featured, and more frugal than ever. And, they wear names that are both foreign and domestic. So which ones are the best? Well, we recently the newest subcompact together with established segment leaders to find out.

JOHN DAVIS: We joined our friends at cars.com and USATODAY for this Subcompact Shootout in Southern California where style may be important, but a fair amount of substance is also required to handle the brutal daily traffic conditions of the left coast.

Our test field is comprised of 7 cars, 5 of which are all new for 2012...starting with the least expensive car sold in America, the Nissan Versa, the sweepingly shaped Hyundai Accent, the sporty Kia Rio, the motorcycle-inspired Chevrolet Sonic, the second generation Toyota Yaris, introduced here just last year is the latest Ford Fiesta, and finally a class icon, the oldest design in the competition, the Honda Fit.

Our test cars are all 2012 models and all get down the road with 4-cylinder power and front drive automatic transmissions. There was a mix of both sedans and hatchbacks in our test, and equipment levels varied from a lot to a little, including a few cars with manual “crank” windows.

While a strict price cap was set at $16,000, manufactures were free to pack as much or as little as they saw fit into their car. We were also joined by a local Southern California couple, to keep us jaded journalists in check and give us their perspective on what's important to young couples in the market for affordable and efficient daily transportation.

Early on, it became clear that narrowing down a winner would be tough, as no one subcompact stood out. All of these cars have major strong points and all offer a lot of car for the price. We had to come up with a winner though, and after every seat was folded and every vote counted we arrived at our final four. 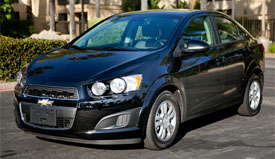 Coming in fourth place is the only domestic brand entry to make the cut, the Chevrolet Sonic sedan, whose $15,155 price tag made it the second cheapest car in the competition. Power comes from a 1.8-liter Ecotec engine with Government Fuel Economy Ratings of 25-City and 35-Highway, which is the worst in our competition. Rear seat legroom is above average for a subcompact 4-door, as is the generous trunk capacity of 14.9 cubic-feet.

BRIAN ROBINSON: The Chevrolet Sonic, in typical American car fashion, has got big power, it’s good to look at, and it’s actually pretty fun to drive. The interior might be a little much for most buyers as they might have went a little over the top in trying to attract the youth market.

KELSEY MAYS: The Sonic has a lot of refinement, the 6-speed automatic transmission isn’t our favorite of the bunch, but it’s quiet, it rides pretty well, and with a 1.8-liter engine that’s a little bit bigger than the others, it’s a little peppier off the line. 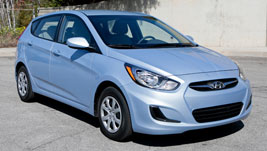 JOHN DAVIS: Our third place finisher is the Hyundai Accent 5-Door hatchback. Ringing in at $15,990, it was the most expensive car here, so it had the advantage of being one of the best equipped. But, it also tied for best fuel economy for its 1.6-liter GDi I4 at 30-City 40-Highway. Rear seat legroom is average for this class, but the hatchback carries a big 21.2 cubic-feet of cargo.

JENNIFER NEWMAN: The Hyundai Accent is chocked full of really great niceties that a lot of shoppers are going to be looking for, such as a nice stereo system, height adjustable seats; however, the rear visibility is a real issue.

JAMES HEALEY: It’s a hatchback, so visibility is a little tricky in the rear. It got scored down a little because of that, but the thing drives really nicely. It’s a very nice overall package.

JOHN DAVIS: Our Subcompact runner-up is a corporate kin to the Accent, this $15,595 Kia Rio sedan. Under the hood is the same direct-injection 1.6-liter as the Accent, so it gets the same great Government Fuel Economy Ratings of 30-City and 40-Highway. We did find this 4-door’s rear legroom to be tight, while the trunk room is adequate at 13.7 cubic-feet.

BRIAN ROBINSON: The Kia Rio is fun to drive, good to look at, and I absolutely love the interior and much like the Accent, you get a lot of features for the money.

JAMES HEALEY: The Kia Rio, mechanically similar in some ways to the Hyundai Accent, but it’s a different design. It’s a sedan so the Rio is a little more formal, a little nicer looking. It’s my personal favorite of the group. 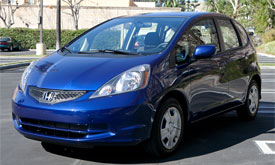 JOHN DAVIS: But, despite all the new contenders, they couldn’t steal top honors away from the perennial subcompact benchmark Honda Fit. Its price of $15,975 was very near the top in our contest, but fuel economy from the 1.5-liter i-Vtec engine, at 28-City 35-Highway, came very close to the bottom. But the Fit excels in being fun to drive, and extremely versatile with its second row multi-folding “Magic Seat”. Rear seat legroom is above class average, while the 5-door’s storage capacity is a healthy 20.6 cubic feet.

JOE WIESENFELDER: The Honda Fit hasn’t been changed in a few years like some of the competitors have, but is still very strong tremendous amount of space inside, very versatile.

ROBYN GERRY-ROSE: The Honda Fit was really our favorite today.

ERIK ROSE: Looking at it from the outside, it didn’t look like a vehicle we would normally get but just a very comfortable car to drive and the flexibility of it. I think it’s that one by quite a margin.

JOHN DAVIS: If nothing else, this comparison has shown us that entry-level cars have come a long way in the last couple of decades. While $16,000 is a lot of money for basic transportation, these cars are much more than that. They are now true family cars with popular features that used to be found only on mid-size and larger cars. In this shootout, it came down to overall versatility, and it’s hard to beat the Honda Fit.  But, we are also sure of one more thing; no other car class offers more value and features for the dollar than the modern subcompact. Finally, great small cars have arrived in America, and we hope they’re here to stay.