You know, rivalries are nothing new in the car business. And one of the most enduring rivalries between German car makers is between Mercedes-Benz and BMW. And two of the most exciting competitors in their respective lines are this Mercedes-Benz SLK32 AMG and this BMW M Roadster. Now both of these cars offer wind-in-the-hair motoring, with the kick of a serious sports car, plus plenty of both luxury and style to boot. It sounds like it could be quite a contest.

Indeed, any contest that pits BMW’s high-performance M-Division 2002 M Roadster against the AMG division of Mercedes-Benz and their 2002 SLK32 AMG is a guaranteed humdinger. Where the SLK wears sleek, semi-retro lines, the M Roadster is all fat tires and bulging fenders. But while we find this muscular body more enticing than that of the SLK32, we were surprised and disappointed with our test car’s uneven paint quality.

But not with what we found under its bulging hood. The 3.2-liter dual-overhead-cam inline six gives the M Roadster a big power boost, making 315 horsepower, and 251 pound-feet of torque. Gear heads will revel in a spec sheet that includes BMW’s High Pressure Double Vanos variable-valve-timing, electronic throttle control, and the M Driving Dynamics Control System, which offers both Normal or Sport throttle response settings. Transmission choices? There isn’t one. As it should be, an accurate, if slightly rubbery, 5- speed manual is the only available gearbox.

The suspension system is classic BMW, MacPherson struts up front, and a semi-trailing design in the rear. All wrapped up in a package that weighs a rather chunky 3,131 pounds. That’s about 700 pounds more than a Mazda Miata. 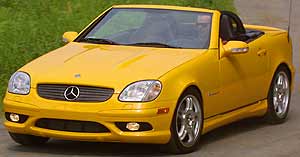 Its Mercedes competitor, the SLK32 AMG, is no lightweight either, pushing the scales to an even beefier 3,220 pounds. But like the M, the SLK32 looks taut, and in its own way, aggressive looking.

Motivating the SLK32 AMG is a 3.2-liter supercharged, intercooled V6. It makes 349 horsepower and 332 pound-feet of torque. Based on the standard SLK32’s normally-aspirated V6, the AMG version adds, in addition to the supercharger, new throttle body, cams, valves and valve springs. And pumps its power to the rear wheels through a typically AMG-sharp 5-speed automatic transmission, with Speedshift manual mode. Suspension is a double-wishbone front, and 5-link rear.

Both look like seriously sporty packages, so we took them to a seriously sporty driving location, Savannah, Georgia’s Roebling Road Raceway. First off the line was the BMW, which ran a best 0 to 60 time of 4.8 seconds. The 1/4 mile took 13.3 seconds at 107 miles-per-hour. Very impressive. But not fast enough to beat the Benz, which hit 60 in 4.6 seconds, and finished the 1/4 in 13.1 seconds at 110 miles-per-hour.

From there, they hit the corners, where the BMW exhibits very neutral handling behavior. There’s very little understeer or body roll, and the chassis feels super-stiff. Steering feedback is very good, though not quite as sharp as the new M3. The inline 6-cylinder pulls like a train out of slow corners, but when allowed to wind out on the front straight, feels a little soft towards the top of the rev band.

Brakes are 12.4-inch front, and 12.3-inch rear discs, with standard ABS. They stop the M from 60 in an average of 124 feet, and coupled with the solid chassis, provide secure, stable braking from high speeds on the track. Overall, it’s a very well balanced, exciting to drive package. A true all-around sports car.

The Mercedes-Benz SLK32 AMG, on the other hand, immediately shows itself to be more grand tourer than straight-up sports car. The SLK32 platform feels stiff, like the BMW, but drop it into a turn, and the front end pushes hard. It also rolls more than the BMW, and gives less feel back through the steering. But hit the front straight, and the mighty blown-six leaves the BMW in its wake. It’s like going to warp speed, with the kind of top end that you expect in a hard core supercar.

Like the M, the SLK32 gets big discs, massive 13-inchers in the front with 11.8-inch platters in the rear, and standard ABS. Stops from 60 are longer than the M at 130 feet. It’s also not quite as stable from triple-digit speeds.

Hit the street, however, and the roles are reversed a bit. The M Roadster has a firmer ride, on-off clutch action, and higher levels of road and wind noise. Noise that easily gets through the power operated convertible top. It’s a traditional lined cloth design, with a flexible plastic rear window. The Mercedes, on the other hand, offers a folding steel hardtop. It keeps the interior very quiet, and gives the SLK32 true all-year, all-weather capability.

As for interior accommodations, the BMW offers a cockpit that’s quite roomy for a 2-seat roadster. It’s a little more utilitarian than the Mercedes, but dash and control layouts are clean and BMW-sensible. The SLK32, on the other hand, looks a bit more upscale with all its wood and leather. Taller drivers asked for more headroom, but all praised the dash layout as Teutonically correct.

It’s been an amazing contest. The M Roadster, the pure sports car, versus the SLK32 AMG, the autobahn-fast grand tourer. Both are fast, fancy, and fairly expensive. Clearly the BMW M Roadster is the muscular champion on the twisties, where the SLK32 AMG is fastest on the straightaways, and a coddler on the street.

Still, if it was our money, the less pricey, more serious M Roadster gets our nod as providing the most top-down driving fun. But we doubt this will be the last duel for this duo, and we can’t wait for next time.