While domestic brands popularized sport-utility vehicles in the 1980s, it’s been the import brands that have led the way in taking the best attributes of SUVs and melding them with car-like comforts and performance. Indeed, since 1999, the Lexus RX300 has been the benchmark of car-based SUVs. But that could change with the recent introduction of the Buick Rendezvous, a vehicle designed to penetrate deep into RX territory. But can Buick’s upstart knock this formidable Lexus off its throne?

Well, let’s take a closer look at the these two new-age, all-weather family haulers and find out. With three years of trendsetting sales riding on its tires, the 2002 Lexus RX300 has pulled out a huge lead over newcomers like the 2002 Buick Rendezvous. But that three years is an eternity in today’s fast moving car market, and marks the RX as due for a serious overhaul. But despite its “age” the RX is still a sleek, handsome machine, with many exterior and interior design elements forged from Lexus sedans.

The RX rides on a compact 103-inch wheelbase drawn from the previous generation Toyota Camry, and measures a tight 180.3-inches long overall. By comparison, the 2002 Buick Rendezvous has been with us only for a few months, but it’s already making its presence felt. The chunky car and minivan based Rendezvous has a more substantial presence than the sleek RX and it begins with a huge Buick vertical-bar grille. Rendezvous not only looks bigger than the RX, it is. The 112.2-inch wheelbase is 9 inches longer, and the overall length of 186.5-inches is a half foot more.

The larger Rendezvous is motivated by General Motor’s well-proven 3.4-liter pushrod V6, that makes 185 horsepower, and 210 pound-feet of torque. And it feeds those ponies through an electronically controlled 4-speed automatic transmission, to either the front wheels, or GM’s very capable Versatrak all-wheel drive system. The Lexus is also V6 powered, but it’s a more sophisticated 3.0-liter twin-cam engine with 220 horsepower, 35 more than the Buick, and 12 more pound-feet of torque, for a total of 222.

Like the Buick, the RX feeds power through a 4-speed automatic transmission, and to either the front wheels, or through a simpler viscous all-wheel-drive system. But to that Lexus adds electronic Vehicle Skid Control, which detects front or rear wheel slide, and then attempts to correct it by either changing the engine speed or applying the brakes to individual wheels. 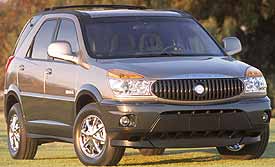 Through the pylons, the Buick displays behavior that’s more minivan than sedan. There’s lots of safe front push, with plenty of body roll, thanks to the soft-riding springs. The power rack-and-pinion steering is also slow, but feel is better than expected. The Lexus RX displays similar behavior. There’s lots of front end push but even less steering feel. And the back end gets quite loose when pushed hard.

But take these vehicles out on the road, and differences between them become more readily apparent. With its longer wheelbase, the Buick Rendezvous delivers a smoother ride than the Lexus, though we detected a bit more suspension noise than its Asian competitor. The Lexus RX300 is mechanically quieter than the Rendezvous, though its shorter wheelbase means that it hops a bit more over rough surfaces. And despite its 7.7-inches of ground clearance, neither the RX300 or the Rendezvous, with its shorter 7.0-inches of ground clearance, is built for the serious off-road work of a traditional SUV. Although Buick is challenging that view with a 15,000 mile drive through the wilds of South America to show off the Rendezvous’ more versatile all-wheel-drive system

Though just running to the supermarket will show off the Rendezvous’ large interior, which measures 163.8 cubic feet. The control layout is typical GM, meaning not quite as fancy or offering as many gadgets as the Lexus, but always straightforward and user-friendly. Second row seating room is plentiful. And there’s even an available third-row bench that folds to make a flat cargo floor, a feature that the Lexus doesn’t offer. Cargo space measures 18.1 cubic feet with the third seat up, 54.5 cubic feet behind the second row seats, and 108.9 cubic feet with the third row folded and the second row seats removed.

The RX300, on the other hand, has an interior that measures a much smaller 140.6 cubic feet. But it’s a more luxurious atmosphere, with a wider selection of high end features like an available premium audio system and DVD-based navigation system. With much less wheelbase, rear seat space is tighter than that of the Buick, and a third seat isn’t offered. Cargo volume is also less, with 30.7 cubic feet available behind the second seats, and a total of 75 cubic feet available with the second row seats folded.

So in addition to saving you lots of money, Buick Rendezvous buyers get more room, more versatility, and better ride quality. But the RX300 buyer gets Lexus quality and prestige, as well as a more sophisticated array of equipment, and much stronger acceleration. That’s enough to keep the RX 300 wearing the class sales crown. But a versatile new effort like the Buick Rendevous greatly expands buyers choices.

Now, neither the 2002 Lexus RX300 or the 2002 Buick Rendezvous are true SUVs, as we define them. But they are clearly the type of sport-ute that the modern urban household now demands. One built more for fighting through the tough terrain of home, school and office, than having fun in the mud.