On any given sunny day, like most car nuts, our thoughts naturally turn to sports cars. Traditionally, sports cars are spirited two-seaters, preferably with a convertible top. If you watch MotorWeek, you know our favorite roadster, despite lots of rivals, is the Porsche Boxster S. Yet now there is yet another new kid on the block angling for our affection. It’s the 2003 BMW Z4. It sure looks appealing, but will we fall for it?

Well, at least some of us did! After a two-day tussle at Georgia’s Roebling Road Raceway, our staff has never been more evenly split about two vehicles. 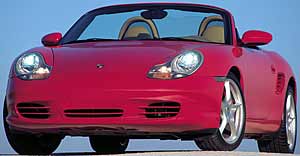 The Porsche Boxster S enters 2003 as the odds-on favorite in this two-seater class, and has been updated just enough to keep competitors at bay. Horsepower from the 3.2 liter flat six is up 8 to 258. Torque rises to 229, though still weighted towards the upper end of the rev band. It all feeds through a 6-speed manual gearbox or an available tiptronic S paddle-shift automatic.

Exterior changes for ‘03 include a larger air intake up front, and a reshaped convertible top that now more closely mimics a hard top. The rear window is now made of glass and the whole bundle stows in a mere 12 seconds.

That’s nearly enough time for the Boxster S to cross the quarter mile mark, in just 14.4 seconds at 99 mph. 0 to 60 sprints are over in a quick 5.8 seconds. Power builds quickly, and with a surge above 4,500 rpm. On the track, the Boxster S remains as solid, well-balanced a sports car as you can buy. We noted a bit more understeer than in past tests, and a bit of nervousness at mid-corner. But that nervous energy is kept in check by Porsche’s excellent PSM stability management system. Our test car featured 18’’ Carrera wheels mounted with grippy Michelin Pilot Sport tires, 225/40’s up front and 265/35’s out back.

Like all Porsches, this one demands the respect and focused attention of its driver, but rewards that vigilence with a truly first-class driving experience. Although at $52,365 to start and $57,905 as-tested, this Boxster’s sticker may be as shocking as its performance. That bottom line is a pretty penny more than that of our other delightful droptop, this 2003 BMW Z4 3.0i.

Building on the success of the spunky Z3, this all-new, made-in-the-USA, two-seat roadster offers a real performance and value alternative to the Boxster S. The 3.0i’s base price of $40,945 rises to $46,470 when loaded up like our tester. A Z4 2.5i costs about 7 grand less. But despite a larger overall package, the Z4’s cabin still gives up quite a bit in roominess and some practicality to its rival.

Z4 styling carries on the long-hood, short-deck theme of its Z3 predecessor, but mixes in a healthy dose of the new 7-Series edginess to give this roadster a more serious, masculine look. A quick drop manual top is standard, with power optional, and the leading edge becomes a hard boot cover when down.

Under the 3.0i’s creased hood resides BMW’s proven . The Z4’s 6 delivers 225 horsepower and 214 lb-ft of torque, both less than the Boxster, to the rear wheels through a 6-speed manual transmission, or 5-speed automatic with manual shift mode. Bigger and less powerful than the Boxster S, Z4 acceleration times were slower, but not by much. Our Z4 took 6 seconds flat to reach 60, and crossed the 1/4 mile a tick behind the Boxster in 14.7 seconds at 94 mph. The BMW 6 offers more of its torque at lower RPMs than the Porsche, making the powertrain seem more effortless and useable. Get past the front straight and the Z4 closes the performance gap even further.

On paper, any track shootout might look like an easy win for the Boxster S, but the BMW Z4 managed to overcome its minor power and equipment shortcomings through a combination of lively performance and can-do attitude.

In the final tally, our vote was evenly split: Some drivers felt more easily at home in the Z4, while others faulted its soft nature and went for the more uncompromising but demanding Porsche Boxster S.

So while the BMW Z4 3.0i may be less of a purist sportscar than the Porsche Boxster S, you have to push both of them pretty hard to figure that out. And don’t forget the BMW’s lower price. Now you see why we’re so split. What should we do about that? Well, did anyone say tie breaker?