Over the years MotorWeek has had some pretty interesting performance car grudge matches. We love to pit the best of the best against each other and see who’s left standing at the finish line. Who are our latest rivals? Two terrific sports cars, the Mazda RX-8 and the Nissan 350Z. So, who’s going to eat whose dust?

That’s a tough question, since both the 2004 Nissan 350Z and 2004 Mazda RX-8 have got all the tools and tricks to deliver potent performance and satisfaction.

This Nissan 350Z Touring model is well known to MotorWeek viewers. We spent a year with one and loved every minute of it. That was after the 350Z won our Drivers’ Choice Best of the Year award for 2003, an award that it earned for its no-nonsense, 2-seat, sports car character.

Much of our affection is due to a no-nonsense drivetrain. The 350Z packs a 3.5-liter, twin-cam, multi-valve V6 that willingly pumps out 287 horsepower and 274 pound-feet of torque. Our preferred transmission is the sharp, direct, close-ratio 6-speed manual.

The drivetrain is well matched to the tight multi-link suspension, which delivers the kind of serious handling that we thought was lost in an age of sport-utes that handle more like school buses. But in the rapidly changing marketplace, the Z’s number one nemesis is not a sport-ute. It’s the Mazda RX-8, the controversial successor to the hallowed Mazda RX-7 which benchmarked the front-engine rear-drive sports car world from 1978 to 1996.

The RX-8 is a different kind of sports car. Unlike the Z, the RX-8 is designed to accommodate more than just two hard-core speed freaks. Its unique 4-door body opens into an upscale 4-seat cabin, so you can take the whole family, albeit a young one, for a blast down a twisty road, which is quickly eaten up by Mazda’s unique rotary engine. This latest twin-rotor edition displaces 1.3-liters, and with our car’s manual gearbox, produces 238 horsepower and 159 pound-feet of torque.

The RX-8’s 6-speed manual gearbox and a tight, short throw shifter delivers a feel much like that of the Z. The double-wishbone front, multi-link rear suspension is tight and precise on road, with a ride that is less choppy than the 350Z. But how well does the softer RX-8 measure up against the razor-sharp 350Z on the kind of asphalt that separates the true sports car from sport coupes? That is, on a race track. More specifically, our favorite southern road course, Savannah, Georgia’s Roebling Road Raceway.

First up are acceleration runs. On an icy cold track, the more powerful Z roared to 60 in 6.1-seconds. It took the quarter mile in 14.8 seconds at 100 miles-per-hour. The Z’s V6 engine has a gutsy growl and is all-day-long strong, with reserve power available across the entire rev band.

By comparison, the RX-8, which is 200 pounds lighter, gives away 49-horsepower. This results in a slower 0 to 60 run of 6.6 seconds, and a quarter mile of 15.2 seconds at 93 miles-per-hour. The cold asphalt hurt all the times compared to our original road tests. But while Mazda’s rotary engine doesn’t rev as fast as the Z’s V6, it is oh so much smoother. It also required a lot more revs for a strong launch. 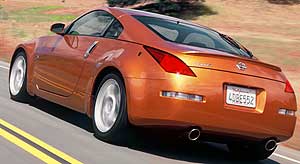 Hitting the corners, the 350Z pushes the front just a bit on turn-in, and then hunkers down and grips like a gorilla. The engine-speed-sensitive power steering is nicely weighted, with very good feedback. Weight is biased slightly towards the front, which led our Touring model’s 18-inch tires to wear quickly, producing a noticeable increase in understeer as the test day went on. But the snappy power delivery allows you to spin the rear tires at will, and use power-on oversteer to point the car when the front push gets too heavy.

The RX-8 is also quick into the corners, but feels lighter on its feet. Balance is better, no doubt due to the Rotary’s lighter mass over its front 18-inchers. That also made the RX easier on front tread wear, allowing the driver to carry more speed through the corner. The electric assisted power steering has less feedback than on the Z, yet the car responds quicker to minor corrections. The engine’s narrow power band needs to be kept between 7-and-9,000 rpm for adequate thrust, not always an easy thing to do, but it rewards that effort with tremendous punch from mid-corner to the end of the next straight.

When you finally run out of straightaway, you need good brakes, which both cars provide in the form of 4-wheel discs with standard ABS. Stopping distances from 60 were nearly identical, with the Nissan taking 117 feet, while the Mazda required 119 feet. Both sets of brakes delivered plenty of bite and good feedback at the pedal.

And both cars delivered plenty of fun on the track, albeit with very different characters. It’s tough to pick a favorite. But, based on track performance alone, our drivers found themselves leaning more towards the RX-8, thanks to its smoothness and balance in fast corners.

Now, if you want to consider styling, in the 350Z’s favor, versatility, back in the RX-8 camp, and everyday drivability, awarded to the broader power band of the 350Z, then the tilt goes the other way.

Will price sway the outcome? Well, base stickers for both cars are very close, $27,200 for the Mazda RX-8 manual, and $26,930 for the Nissan 350Z manual. But you have to upgrade the Z to Touring trim for 18-inch wheels and high performance tires which are standard on the manual RX-8. With that the Z’s price jumps to $33,840.

So in a mano a mano road course grudge match, who ate whose dust? Well, when you factor in performance, refinement, and bang-for-the-buck, it looks like the Nissan 350Z sucked up just a little more grit than our winner, the Mazda RX-8. But it was a close match, a match that we’ll be glad to repeat any time that we can put these enticingly-fast sports cars, and an empty race track, together as one.