Unassuming economy cars, like this Mitsubishi Lancer or the Subaru Impreza, are great for getting you from point A to point B with modest style and great economy. But until recently, no one could mistake them as the basis for world class high performance cars. But that changed forever with the introduction of the road rally bred Lancer Evolution and Impreza WRX STi. But can amped-up compacts really cut it in a world full of Corvettes and Porsches? And if they can, which one has the sharper edge?

To find out, we grabbed both the 2004 Subaru Impreza WRX STi and the 2003 Mitsubishi Lancer Evolution, and hit the gas! Both machines come from a long line of race winners, having been inspired by each company’s formidable World Rally Championship cars. And they do look like race cars with hyper-aggressive bodywork that appeals to both hard-core race fans and today’s import tuner crowd as well. They back up that bold styling with chassis and drivetrains tuned to deliver a dynamic driving experience. The all-wheel-drive Lancer Evolution is new to America, but is actually the eighth generation of a car that was first introduced in Japan in 1992. 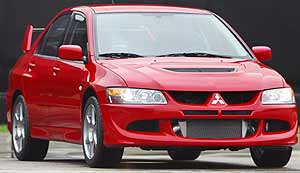 This serious competitor has a deep, arrow-head nose, lightweight aluminum hood, with large cooling vent, and tall composite rear wing. Inside, the Lancer is equipped with body-hugging Recaro seats, a stylish Momo steering wheel, and upgraded gauges with a 160 mile-per-hour speedometer.

Spinning that speedo is a hyper-tuned 2.0-liter dual-overhead-cam four-cylinder. Its 271 horsepower and 273 pound-feet of torque is by way of a sophisticated twin-scroll turbocharger and a large air-to-air intercooler, for 19 pounds of boost. A water-spray further lowers intake temperatures to increase charge density and shifts that power through a 5-speed manual gearbox. All four wheels are turned by a twin-differential driveline, with a viscous coupling to adjust power distribution, and are themselves a one-piece 17-inch design by ENKEI, slowed by Brembo discs and calipers. 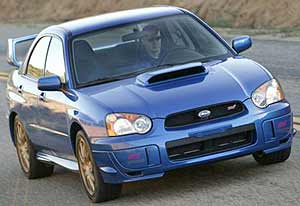 It’s all slick and trick, but it’s not alone in the super-compact class. Because Subaru has finally unleashed its ultimate Impreza WRX, the STi, on the U.S. market. STi stands for Subaru Technica International. Think Japanese AMG. Like its Mitsubishi rival, the WRX STi is built on a heavily reinforced version of a standard subcompact platform. And like the Lancer, boasts a more aggressive, rally-inspired front end with a massive hood scoop to collect cool air for the intercooler and a rally-size rear wing.

Inside, there’s no radio or floor mats to save weight! But there are Subaru’s own sport- seats, which are a bit flatter, yet wider than the Lancer’s Recaros, plus an STi-brand small- diameter steering wheel and revised gauges with a center-mounted 9,000 rpm tach.

Revolutions come from a 2.5-liter flat 4-cylinder with variable valve timing. Output is 300 horsepower and 300 pound-feet of torque at only 4,000 rpm. It inhales 14.5 pounds of boost from a high-pressure turbo and big aluminum intercooler, with a water spray system of its own, and exhales output through a 6-speed manual transmission.

The all-wheel-drive system uses a planetary center differential and electromagnetic main clutch. The differential offers either an automatic mode or a driver-controlled manual mode with six levels of power distribution. 17-inch BBS wheels complete the package, and are backed by even larger Brembo brakes than the Lancer.

So how do they match up? Well, we hit the track to find out. First up was our home 75-80 drag strip, where the Lancer sprinted to 60 in a mere 5.0-seconds flat! The 1/4 mile rocketed by in 13.8 seconds, at 101 miles-per-hour. Seriously quick! Launching the Lancer requires plenty of revs, and a willingness to really slip the light, smooth clutch. The engine revs through the gears like lightning, making big power from as low as 3,000 rpm, to well past the 7-grand redline.

In contrast, the WRX STi has a softer clutch, and more typical all-wheel-drive hesitation on launch, but then rockets to 60 in 5.1 seconds. The 1/4 mile time is 13.8 seconds, at 100 miles- per-hour. Massive mid-range pull makes up for the start line stutter. As does the light, accurate shifter. Power starts down low, and then hits like a truck at 5,000 rpm. Gear ratios are perfectly spaced, to keep the engine in its 6-to-7,000 rpm sweet spot all through the run.

And run we did to Charleston, West Virginia, and Summit Point Raceway’s challenging Jefferson Circuit. As on the straight and narrow drag strip, the Evo and STi exhibited very different characters on the twists and turns of a road course. Coming into a corner, the Evo’s brakes deliver decent power, but feel soft, with little feedback. On turn-in, however, the car feels light and responsive, changing direction easily, and exhibiting moderate push at mid-corner. Steering feel is spot on, and grip from the sticky R-rated Yokohama ADVAN tires top notch. It feels lighter than the STi, despite identical 3,263-pound curb weights.

The STi, on the other hand, is stronger under braking, with its larger Brembos delivering superb power and feel. Front end push is more pronounced, however, even with the adjustable differential, giving a good bit of speed away to the Lancer at mid-corner. Speed that is easily recovered on the way out, as the super-torquey Subaru simply walks away from its Mitsubishi rival.

Overall, we give the more nimble Mitsubishi top marks in the tighter sections, while the storming Subaru scores on the straightaways and under braking.

Out in the real world, both cars are very drivable. On smooth pavement the Evo’s ride is superior, but the STi handles potholes more in stride. The STi’s torquey engine and slicker shifter also make it easier to handle in stop-and-go traffic.

On the showroom floor, the Lancer Evolution scores well with a base price of $29,582. And that includes a stereo and floor mats. The Impreza STi costs $31,545. Almost two-grand more than the Lancer, but you definitely get more muscle for your money. But come on guys, no radio?

Staff opinions were pretty much split along hair lines. The Evo appealing most to our youth corp, while the STi won the favor of those with grayer follicles. While overall we’ll give a slight edge to the STi, we’ve never tested two cars that are this close to being equals. But whether you pick the 2003 Mitsubishi Lancer Evolution or the 2004 Subaru Impreza WRX STi, you will get performance equal to some of the world’s most expensive sports cars, for way less than half the price, and a serious dose of fast-and-furious style to back it up. Both cars are aimed at the same, very exciting destination. They just have different, but equally entertaining, ways of getting there.