Here at MotorWeek, we test all kinds of practical cars and trucks. But we are automotive enthusiasts, so it’s the high performance hardware that we enjoy the most. So when we get a chance to drive one of the world’s best sports cars, we jump at it. So how excited do you think we are when one becomes two?

And not just any two, but two of the most coveted machines in the history of modern sports cars! In the U.S. corner, that icon of American V-8 automotive muscle, the all-new, sixth generation 2005 Chevrolet Corvette. Its German challenger, the all-new, sixth generation of Porsche’s rear-engine wonder car, the 2005 911 Carrera S. Both 6’s are tight, tuned and track ready, so we brought them to Georgia’s 2-mile Roebling Road Raceway for a wheel-to-wheel ‘‘track fight’‘. Now you can’t be a serious high performance sports car without serious power, and these cars have plenty!

Inside the new Corvette’s composite body sits Chevy’s latest small-block pushrod V8, the 6.0-liter LS2. Pumping out 400 horsepower and 400 pound-feet of torque, the all-aluminum LS2 is mated to a Tremec 6-speed manual transaxle.

Carrera S power comes from fewer cylinders, but the twin-cam 3.8-liter horizontally-opposed six still cranks out 355 horses and 295 pound-feet of torque. It also uses a 6-speed manual gearbox, that’s been beefed up to handle the S model’s added torque.

Both cars hit the pavement on tall alloy wheels, the Corvette with 18-inch hoops up front and 19-inchers at the rear, while the Carrera S runs 19-inches at all four corners. 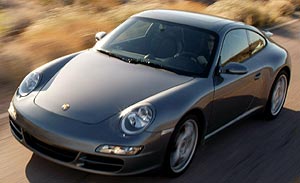 Two potent packages, facing off first in the quarter mile. Hit the Corvette’s go pedal, and the torque hits like a semi. We had to feather the throttle to avoid being mired in wheel spin. But launch is clean and you pass 60 in 4.8 seconds. The quarter mile flies by in 13.2 seconds at 112 miles-per-hour. The shifter is positive as you exercise its long, slow throws.

The Carrera S also leaps off the line, but its smoother power delivery means less wheel spin. The smaller Porsche six also revs faster than the Vette’s V8, hitting 60 in only 4.2 seconds and cracking the quarter mile in 12.8 seconds at 109 miles-per-hour. The Porsche shifter is shorter and sharper, both up and down the gears. 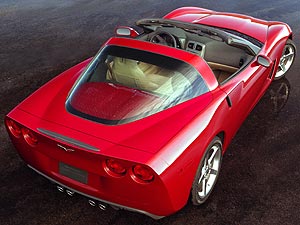 Hit the corners, and the Corvette shows off the excellent balance that is making the C6 such a hit with fans. The magnetic-assisted power steering allows for smooth turn-ins, with the front end delivering mild push at mid-corner. The LS2 V8’s massive torque pushes it hard out of the corner, and requires a smoother gas pedal touch than previous Vettes to keep the rear end in line. While at the next corner, big vented-discs deliver strong, fade-free braking, but could use a bit more feel. It’s strong and extremely stable. Very user-friendly for such a hairy-chested beast. But if we did this often, we’d definitely opt for the flatter cornering Z51 Sport Package.

The Carrera S, on the other hand, has a decidedly finer edge, but also requires a bit more driver finesse. Flick the steering wheel, and the front end snaps into a turn. The feel is very neutral at mid-corner, but that well known Porsche oversteer is evident as you power out. It requires a more delicate balance of throttle and steering, but that yields quicker direction changes and more positive feedback from the tires. Braking is also more positive, with ample feel and power to spare. True, the 911 S requires more skill to drive quickly than the Vette, but rewards that effort with impressive prowess.

The Porsche Carrera S also carries an impressive price tag of $79,895. Big bucks sure, but then the S is big time serious performance. The Chevy Corvette’s all-American Motor City origins, on the other hand, are reflected in a more attainable $44,510 base price. So, if bang for the buck is the issue, the C6 is definitely the one. Indeed, while our staff was knocked out by the Carrera S and its track performance, we’re still amazed by how much the Corvette delivers for slightly more than half the price.

But it’s also amazing that both cars are so street-able. From expansion joints to potholes, these animals are fully tamed. And electronic driver aids like ABS, traction, and stability control mean bad weather driving is no white-knuckle experience. So not only are the 2005 Porsche Carrera S and 2005 Chevrolet Corvette two of the best sports cars, but two of the world’s best cars, period.