For nearly 70 years, Rolls Royce and Bentley built cars under one roof in Crewe, England. Often the biggest differences between models was the grille, and the fact that one was topped by the “Flying Lady” or the “Winged B.” Then, in 1998, they went their separate ways, with Rolls becoming a part of BMW, and Bentley joining Volkswagen. So, where are they today? Well, to answer that question we decided to set side-by-side each brand’s newest entry to see if one or both made this historic divorce worthwhile.

Neither of these rarified four-door sedans, the 2010 Bentley Flying Spur Speed, nor the 2010 Rolls Royce Ghost, looks out of place on 21st century byways. But their visions are markedly different. While the contemporary Bentley’s windswept body wears a number of historic cues, the classically trained Rolls holds to old-school lines with detailed modern touches.

The Ghost’s Yacht Line styling is steeped in Rolls-Royce tradition. The tall, imposing bow favors the giant Phantom, and is of course topped by a pedestrian-friendly, retractable Spirit of Ecstasy. The Ghost’s greenhouse is also classically pushed toward its flared rear haunches. Standard wheels are 19s, 20s are optional. Both feature self-righting Double-R emblems.

Meanwhile, the Flying Spur Speed is far more sporting than stately. Four round headlights are a Bentley trademark, shared with its closely related two-door Continental GT. The Speed edition distinguishes itself with smoked mesh, a slightly lower ride height, and 20-inch wheels.

The four-door interior is also very similar to the coupe’s-a pair of wings flank the center stack, gauges are set deep in the Burr Walnut dash, and round vents feature organ stop-style knobs. An analog timepiece, nestled between the central pair of vents, is by Breitling. The Speed features exclusive diamond-quilted leather on the door panels and massaging seats.

DVD navigation, multi-zone climate control, and Bluetooth are all within easy reach. Cabin noise is lessened by increased use of added acoustic materials and a re-tuned exhaust.

In a unique and time-honored tradition, umbrellas pop out of the trailing edge of each of the front doors of the Rolls Royce Ghost, perfect for a chauffer attending to those in the Ghost’s slightly elevated and exceptionally comfortable, power adjustable rear seats. A slight curvature makes conversation civilized, while the monumental C-pillars affords plenty of privacy.

Optional are fold-down trays veneered in a choice of materials, and twin video screens that fold down from the front seatbacks. The Ghost’s driver is greeted by a dash that is classically proportioned, with violin-key switchgear, a logoed analog clock, and broad stretches of wood veneer.

Fittingly, the Ghost’s double-wishbone front, multilink rear air suspension soaked up bumps as if the car never touches the ground. The rear-drive Ghost flies with a twin-turbocharged, BMW 6.6-liter V12, good for 563 horsepower and 575 lb-ft of torque. With an eight-speed automatic, shifts are quick but smooth. 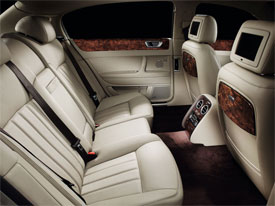 The Continental Flying Spur‘s twin-turbo 6-liter W12 is derived from the naturally-aspirated Volkswagen Phaeton. In Speed trim, horsepower is up to a cool 600, 48 more than usual. Torque increases 74 to 553 pound-feet. A stout ZF six-speed automatic still does the shifting, routing power to all four wheels and allowing manual choice from wheel-mounted paddles.

The Speed features revised suspension components and steering, which firms up the Continental’s already taut responses even further. For a near three-ton vehicle, the Bentley drives like an enthusiast’s dream. No chauffer wanted here, ever.

In the upper crust of motoring, these two stand-alone. Still, even as we enjoyed driving the Ghost, this most extravagant super sedan still caters to a chauffer-driven clientele. Whereas, Bentley’s racing heritage continues in a car always meant to be driven by the owner. The fact that the Flying Spur Speed also happens to be most powerful British four-door ever built isn’t lost on us either. We’ll grab these keys first. But you’ll never see us turn down a ride in either.