Whether it’s the economy, low gas prices, or just the cyclical nature of the automotive world, full-size, body-on-frame SUVs are back envogue. Plus, they are now being completely modernized for even bigger success in the future. So, along with our colleagues at cars.com we’ve put the latest big utes to the test, to see which one stands out.

Big family-size rigs have a purpose of course, and it’s not just towering over people on your daily commute. When it comes to hauling and towing maximum amounts of people, gear, or toys; they really are the most comfortable choice.

This landscape of big truck SUVs, where 3rd rows are standard and V8-style power are the norm, is represented here by…

…the Chevrolet Tahoe; segment volume leader and last revised for 2015…

…an all-new Ford Expedition, the only competitor here not actually sporting a V8…

…the Nissan Armada, relaunched for 20-17, and now based on Nissan’s global Patrol SUV, not the Titan pickup as before…

…and finally, our oldest competitor here, the Toyota Sequoia, last redesigned for 2008.

This time we set up camp in Phoenix, Arizona, racking up as many miles as possible in a week’s time; in just about every scenario imaginable, including towing through the nearby Superstition Mountains.

And if there’s one constant with full-size utes, it’s that you’ve got to pay to play, so no price cap here; which means a fairly wide range of MSRPs, from the 70-g’s of the domestics, to the relative bargains of our two Asian competitors. Be sure to head to cars.com for complete details on our test.

If we’re here to pick a winner; that means there’s going to be also rans as well, and coming in 4th place is the Toyota Sequoia.  It was truly facing an uphill battle against these newer designs; but it wasn’t all bad news, it did come with the lowest price here by quite a margin at $59,873, with reliability that’s second to none.

BRIAN ROBINSON: “Getting in the Sequoia, it feels like a dinosaur compared to the rest of the vehicles here; the nav. screen is tiny and not well-integrated, there are lots of hard plastics everywhere. But there are also some nice, big control knobs and the ride is quite good… …it’s just that its older design keeps it well behind the pack here.”

BRIAN NORMILE: “…if you had told me this was maybe a 2013 or ’12 I would have believed you, except for the fact that it’s the new trim level… …it’s got some basic safety features, but it’s lacking the full list that the others here have, and it’s definitely lacking in terms of comfort and convenience features…” 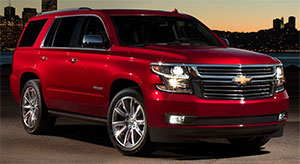 JOHN DAVIS: 3rd place goes to the Chevrolet Tahoe. A long-time benchmark in the segment, it’s still the most truck-like rig of the bunch, sporting the biggest engine here, as well as the highest price tag. Yet it put that monster motor to good use, getting the best fuel economy of the bunch during our towing loop.

BRIAN ROBINSON: “…the Tahoe has a comfortable interior and a powerful engine that tows trailers like they’re barely even there… …it’s not perfect though, the exterior mirrors are barely adequate in normal use, much less in towing, and the really wide center console gives it a claustrophobic feeling compared to most of the others here…”

MARK WILLIAMS: “…the Chevy Tahoe RST is kind of the athlete of this group; it’s got the biggest V8 engine, which sounds amazing through the dual pipe exhaust, but is also performs really well even when we’re towing…” 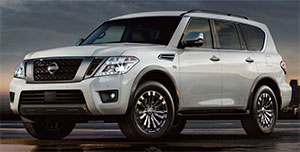 JOHN DAVIS: A bit of a surprise, it’s the Nissan Armada that came in 2nd, mostly due to the over the top luxury of its Platinum Reserve interior, at a price well below the domestic entries, at $67,145.

BRIAN ROBINSON: “…the Armada feels very solid, surprisingly so, yet it still has a good ride; the interior is comfortable; it just can’t hang with the domestics when it comes to towing and overall capability…”

AARON BRAGMAN: “…it has plenty of features, and it really is kind of the luxury version of these vehicles; it is super plush inside, absolutely quiet, and really a pleasure to drive…”

JOHN DAVIS: It’s no secret, domestic brands do full-size trucks right; and the SUVs based on them are quite nice as well. So we’re not really shocked that the new Ford Expedition won. Based on the long-time best-selling truck in America, the F150, the twin-turbo V6 Expedition did everything we asked of it in true V8 fashion, while packing in more luxury and features than any other entrant here. 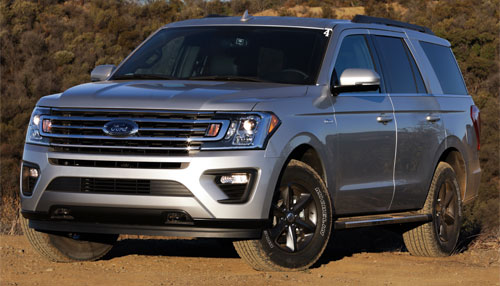 AARON BRAGMAN: “Ford’s new Expedition is the first big new update to a really popular product in a long, long time; and they really did knock this one out of the park. It’s better in every single conceivable way; it’s more comfortable, it’s more fuel efficient, it’s more stylish, it operates really well in terms of its cargo flexibility inside, it drives really well, super quiet, and then you get some of that turbo spool-up from the turbo V6.”

BRIAN ROBINSON: “…as the newest design here, the Expedition has a lot going for it, including a gorgeous interior, smooth 10-speed automatic transmission, great tech interface, and just way more features than any of the other vehicles here…”

JOHN DAVIS: So, a domestic brand’s effort was the standout here, but it’s clear that others are catching up. And wherever your allegiances lie, there are plenty of good options for your full-size SUV wants and needs.