If you’re in the market for a 3-row family SUV, you’ve probably realized by now that the number of good choices is almost overwhelming. Well, we’re here to help, with a look at 7 of the best-selling big crossover utes. So off we go to find out which one offers the best value for today’s families.

We’ve come to the natural dwelling place for most 3-row SUVs, Suburbia. More specifically, the urban sprawl around Chicago, Illinois, where our friends at cars.com call home.

Focusing on the more popular crossover side of the family SUV market, there are no big surprises for this 3-row throw down; with all the usual players here, as well as some newcomers.  In alphabetical order, they are…

…the spacious and stylish Chevrolet Traverse…

…the Ford Explorer, riding on a new rear-wheel drive platform…

…longtime standout in the segment, the Honda Pilot…

…then a newcomer to the segment, the luxurious Hyundai Palisade…

…along with its corporate cousin, the Kia Telluride…

…Subaru’s biggest SUV ever, the Ascent…

…and finally, the winner from our last 3-row challenge, the Volkswagen Atlas.

All of our contestants are equipped with all-wheel-drive and automatic transmissions, naturally; but there is a mix of 4-cylinder and 6-cylinder engines. Most are 8-passenger capable, with the exception of the Explorer and Atlas which max out at 7, but every utility here in our test was equipped with 2nd row captain’s chairs, knocking capacity down to 6 and 7 passengers. Price ranges from 46-$54,000.

A full rundown of scoring can be found on cars.com’s website; but for now, let’s take a look at how they stacked up.

As you can imagine, scores were very tight in this one, with all utilities attempting to deliver pretty much the exact same thing. So, it’s really no condemnation that the Honda Pilot, Chevrolet Traverse, and Subaru Ascent wound up taking the bottom three spots in this challenge.

A more detailed look at our top-4 finishers starts with the Ford Explorer. One of only two contestants with a 4-cylinder engine, the Explorer’s 300–horsepower 2.3-liter EcoBoost didn’t hold it back at all.  It was also quite entertaining to drive. But, as scores were tallied, the 6-passenger interior was not as roomy as some, tech features not as comprehensive, and at $54,420, it was the priciest ride here.

BRIAN ROBINSON: “The Ford Explorer is a fantastic vehicle to drive; plenty of power from the EcoBoost turbo we’re used to from Ford, but it didn’t always seem to be on the same page as the transmission sometimes.”

BRIAN WONG: “The Explorer was the most fun to drive out of the vehicles we had here, but I’m not sure how much that matters in this class; I think that if Ford had paid more attention to things like interior quality or how comfortable it was, it might have had a better finish.”

JOHN DAVIS: Third place is where we find our returning champ, the Volkswagen Atlas. Still, one of the roomiest vehicles in the segment, with a great ride and smooth 276–horsepower V6; all for a mid-pack price of $50,320. The 6-passenger Atlas really didn’t do anything wrong here, just unfortunate to have some new competitors arrive that elevate the segment.

BRIAN ROBINSON: “The Atlas is comfy and very roomy. It’s ok to drive. The interior is just very drab looking, except for the digital dash and the infotainment screens, they look great and are easy to use as well.”

KELSEY MAYS: “…the Volkswagen Atlas has fared pretty well in these comparisons, we’ve had it in multiple comparison tests, and it’s just got a ton of room, especially in that 3rd row, really easy to get back in there; actually, the Atlas has a more comfortable 3rd row than even the 2nd row in some of its competitors…” 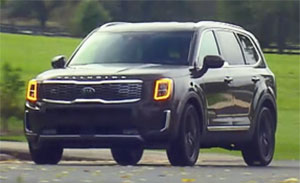 JOHN DAVIS: Finishing in 2nd place, is our first of those new arrivals, the Kia Telluride. It looks like a real SUV, yet rides like a luxury car; and as we’ve seen before when Kia gets real about a segment, offers an incredible amount of features and comfort, for not a lot of dollars. $46,860 made the 7-passenger Telluride the second least expensive vehicle here; undercut only by the Subaru Ascent.

BRIAN ROBINSON: “The Telluride is great looking and for being one of the least expensive here it offers so much and you feel like you’re getting away with something.”

AARON BRAGMAN: “…the reason I didn’t have the Telluride higher than the Palisade, was because there’s a couple things you can’t actually get on the Telluride; you can’t get a powered 3rd row seat for instance, which I think is kind of a strange omission in a vehicle this big and at this price.” 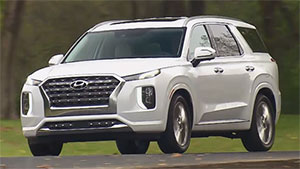 JOHN DAVIS: That makes the Hyundai Palisade our winner. For just a few bucks more than the Telluride, at $47,605; the 7-passenger Palisade delivered a much more luxurious experience with a European flair.

BRIAN ROBINSON: “The Palisade just feels on a whole other level than the rest here; whther you’re talking about the interior, the way it drives it is the total package and it would be more than competitive if we had put it in a luxury SUV comparison.”

AARON BRAGMAN: “…we did edge the Palisade over the Telluride a little bit based on the strength of the quality of its interior; more than anything else, it really feels nice inside, quilted leather, and all of this for a price that is thousands of dollars less than some of these competitors.”

JOHN DAVIS: All of these 3-row SUVs deliver the comfort and convenience features that today’s families are looking for, along with the safety systems they expect. And while they’re all a lot more alike than they are different, a few things stood out.

The Hyundai and Kia certainly had an advantage being the newest designs; but really, it was their ability to deliver more for less that truly sealed the deal. Also, there’s never been a better time to be in the market for a 3-row crossover; manufacturers are competing hard for your business, which makes all of you the real winners.