It’s that time once again.  Time to gather a group of the newest of the new together, meet up with our friends at Cars.com, and find out which vehicle rises to the top. This time we’re tackling that ever so popular and fast becoming necessity of American Motordom, the 3-row family utility.

The 3-row, 7-to-8 passenger, mid-to-large sport and crossover utility segment is certainly one of the most competitive out there. Whether its hauling kids everywhere daily, or getting packed up for long distance vacations, they are a necessity for many American families.

Automakers are relying on them more than ever as well, to boost their bottom line. And even though we’ve compared this segment many times before, this go around sees the freshest entries yet, as all of our competitors are either all-new or have recently been heavily revised. So without further ado, let’s meet our contestants…

A price cap of $45,000, means that we have a wide variety of both powertrains and option packages.

We kept it local this time around, here at MotorWeek World Headquarters in Maryland; and as usual, enlisted some hometown help in the market for new family carryall.

Too many vehicles and not enough time for a full rundown here, so for the complete scoring breakdown, head over to cars.com. But for now, here’s a run through our top-4 finishers.

And, in the fourth spot rests the all-new Mazda CX-9. There’s no denying the CX-9’s sportier attributes or its sleek design inside and out, but it was a little short on space and family-friendly features for our judges. Also no help was the highest sticker at $44,915, despite sporting the only 4-cylinder engine, though there were no complaints about its acceleration.

JENNIFER NEWMAN: “The CX-9 should be the clear winner, with its sporty good looks and its fun to drive engine; however, its 3rd row could induce claustrophobia.”

MIKE HANLEY: “I was really impressed with the CX-9’s interior quality; it has rich leather, real aluminum trim, and real wood trim… …the CX-9 also wasn’t as spacious as some of its competitors, especially in front where it feels like a much snugger car.”

JOHN DAVIS: In third, another stylish entry, the Kia Sorento. It offered a lot more space than the CX-9, as well as a V6 engine; and more features for the money coming in at $43,295.

FRED MEIER: “While the new Sorento shares some mechanicals with the Santa Fe, I think it may have beaten its corporate cousin in terms of ride and quiet cabin.”

BRIAN ROBINSON: “With the Sorento, I love the multimedia interface, very easy to figure out, but you also have lots of big manual controls, I like that as well; material quality is very good, ride quality is not the best, firmly mid-pack; I like the looks of the exterior, lots of space inside.”

JOHN DAVIS: GMC’s Acadia, our runner up, may have shrunk with its ‘17 redesign, but its size is now much more competitive, while being less bulky to drive. Just $30 more than the Sorento, at $43,325, the Acadia looks great, felt adequately roomy and was one of the best riding rigs in the bunch. 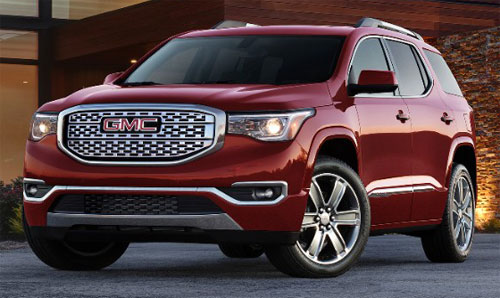 JENNIFER NEWMAN: “For 2017, the GMC Acadia lost 7-inches, but it gained so much more… …it now has USB ports in every row and lots of storage cubbies for all the things that come with families.”

BRIAN ROBINSON: “The Acadia has most of the tech and safety features you’d want at this price and has one of the nicest rides here; probably the thing I don’t like most about it is, they’ve made it a lot smaller with this generation, so I feel like I’m paying about the same money and getting less for it.”

JOHN DAVIS: That leaves the Honda Pilot as our winner. It wasn’t a surprise really, as it also won our 2016 MotorWeek Drivers’ Choice Award for Best Large Utility. The Pilot is well designed, and as solid as they come. And, it’s priced just above the Acadia at $43,700.

FRED MEIER: “The new Pilot isn’t the most fun to drive, but it excels at the things that probably matter a lot more to buyers in this segment; it’s loaded with really smartly designed family features front to back… …and its got lots of space for people and cargo.”

JEFF GIVENS: “For practicality and for our lifestyle, we’ve got 2 kids, I would choose the Honda because it seems to fit our lifestyle and it has a lot of features that work around that, the kids can go from the front to the back, and it accommodates child seats very well.”

JOHN DAVIS: There are more options in the three-row utility arena than ever, and we were not able to include all of them in this test. But, for the newest of the new entries, when it comes to packing the most features and space, into an easy to drive all-wheel-drive platform, the Honda Pilot leads the way.