When the car-based Toyota RAV4 debuted for 1996, it changed the way SUVs would be looked at forever. The unitized Honda CR-V quickly followed, and today the market is flooded with compact crossover utilities from just about every brand.  Well, we recently pitted 7 mainstream compact utes up against each other, and here’s how these five-seaters matched up.

We’re at it once again with our friends from cars.com and USA TODAY, shuffling through this 7-pack of compact crossover utilities to see which one offers the best mix of features and finery for today’s smaller on the go families.

$28,000 with destination was our price cap and all contestants are within $850 of that limit, so no low-ballers this time around. All are 2015 models and 4-cylinder automatics, but only 2 are equipped with all-wheel-drive.

Leading off our lineup is the Chevrolet Equinox…

…and one of the original compact crossovers, the Honda CR-V…

…batting clean-up is the Mazda CX-5…

…next up, the recently redesigned Nissan Rogue, our least expensive entry…

…coming with standard all-wheel-drive is the Subaru Forester…

…and finally the one that started this trend, the Toyota Rav4…

As usual, we’ve been joined by a local family from our Maryland test venue to help sort through the gearboxes and gadgets of these modern-day station wagons.

With the very close pricing and mostly similar designs, it became clear early on that scoring would be tight.

And there were certainly some surprises, as in the bottom three slots are the Mazda CX-5, Toyota Rav4, and Subaru Forester. All fine choices and major sellers in the segment, but they fell behind here for reasons such as rough ride quality, subpar interior materials, or excessive road and engine noise.

A full scoring rundown is available on the cars.com website. But for now we’ll dive a little deeper into our top-4 finishers.

Starting with fourth place and the Nissan Rogue. At first glance its flashy exterior, and pleasant interior produced raves. And, value. It not only had the most tech for the dollar, but total dollars at $27,150 were the group’s lowest. Plus, Combined fuel economy of 28 was the highest. But, it lost all that ground in driving. Testers complained about excessive noise, especially from the CVT powertrain, which was slow to move out for passing. Handling was uninspired too.

KRISTIN VARELA: “Nissan manages to pack a lot of extras into the Rogue at the same price point as all of the other cars in our shootout; my personal favorite is the Around View camera that gives me a full 360-degree view around the car.”

KELSEY MAYS: “The Nissan Rogue has a handsome interior, probably the best materials in the entire class; the seats are reasonably comfortable too. Now the CVT, which Nissan used to really specialize in, is kind of its Achilles’ heel; it just drones around a lot; isn’t a lot of fun to drive.” 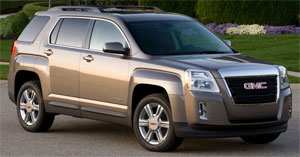 JOHN DAVIS: Earning 3rd place is the rugged-looking GMC Terrain. It may be the most truckish looking of the group; still there is plenty of car-like comfort; as well as lots of space. But the Terrain also wore the highest sticker price here, at $27,905; and shared the lowest Combined MPG rating of 26.

KELSEY MAYS: “The Terrain, like the Equinox has a very large back seat with a nice seating position that’s high enough off the ground; it’s probably the only vehicle, along with the Chevy, that adults will actually be really comfortable in, in the back seat… … The GMs really excel at that.”

KRISTIN VARELA: “I love the sliding back seat in the GMC Terrain, it creates a ton of legroom for the back seat passengers.” 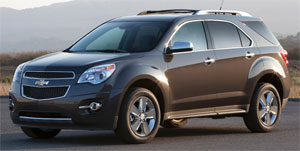 JOHN DAVIS: And logically then, our 2nd place finisher is the Chevrolet Equinox for mostly the same reasons, but it barely eclipsed its platform mate thanks to some preferred features and pricing that came in $100 less, at $27,805. With the same 2.4-liter I4, it shares the Terrain’s 26 Combined MPG rating.

ANDY DAVENPORT: “The Equinox was probably our favorite because of the electronic package; the technology package has the ability to stream our Bluetooth which is on our phones… …and we’re able to listen to music we would like to listen to…”

BRIAN ROBINSON: “For an older design, the Equinox held up really well here, and mostly because of all the space inside; but also for the good ride quality.” 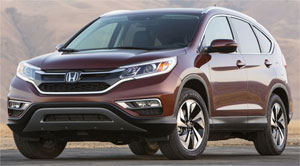 JOHN DAVIS: So that leaves the Honda CR-V, fresh off a refresh for 2015, as our winner. And it’s a repeat win, having taken the prize in our last compact utility comparison 3 years ago. It did so with the typical Honda formula of doing just about everything well enough, without necessarily dominating in any one category; though space and comfort were obvious highlights, not to mention a very low load floor for easy cargo access and features like Honda’s LaneWatch blind spot camera.

BILL JACKSON: “The CR-V provided a good blend of interior room and a surprisingly very rewarding driving experience; particularly the steering, engine, and the transmission were very responsive.”

JAMES R. HEALEY: “…the Honda has a real nice feel to it; they’ve really worked hard to get it to go down the road nice; it’s a good suspension, good steering, it doesn’t feel sloppy or imprecise, and it had all-wheel-drive for the price.”

JOHN DAVIS: If nothing else, this comparison proves that there are plenty of great crossover options for a growing family. And even with the even smaller subcompact offerings getting most of the headlines lately, manufacturers are still throwing lots of effort into bringing the most bang for the buck as possible to the higher volume compacts. But here in this competition, it looks like they are all still following Honda’s lead.