Crossover utilities dominate the market these days, and they come in all sizes and prices. And those prices are generally climbing as more and more luxury is being added to even smaller, compact SUVs. But, with around 50-k on the line for something that takes up so little real estate, we thought it might be wise to help you do a little comparison shopping.

When it comes to luxury utilities, there are plenty of choices. But, this time around we’re focusing on compact luxury SUV’s. As usual, we joined the staff of cars.com for this bumper-to-bumper comparison of seven small crossovers.

We brought them together outside Chicago. Starting witH the Italian bred Alfa Romeo Stelvio… the sporty Audi Q5… the benchmark BMW X3… the sharp-edged Cadillac XT5… the dynamic Lexus NX 300 F SPORT… the innovative INFINITI QX50… and the all-new Volvo XC60.

Joining us was a potential buyer to help keep our test “real”. To make it even more challenging, we added a track component… taking the group to Great Lakes Dragway in Wisconsin.

For a complete break-down of the track times, specs and overall scoring head on over to cars.com.

But our bottom three finishers were, quite surprisingly, the Alfa Romeo Stelvio, BMW X3, and Lexus NX 300 F SPORT. Each lost points for things other than driving performance, such as interior style and materials, lack of advanced safety features, and spaciousness.

That leaves a most practical quartet.

In fourth place, is the Cadillac XT5. It’s the only V6 in the group, and it delivered decent power. Ride and handling are European firm, while still American comfortable. It was the test’s most expensive at $52,560.

Garick ZIKAN: "The Cadillac is the only domestic brand in this group, but it has the driving characteristics to compete with the European and Asian rivals. There’s also plenty of tech and a lot of luxury you can see and feel.”

KELSEY MAYS: “In terms of driving it’s certainly the heavier car here so you can tell it’s heavier in terms of handling. I will give Cadillac credit though for having an immediate accelerator pedal. I mean you get on the gas and it sells a lot of power right away, there’s no lag like there is in some of the others.” 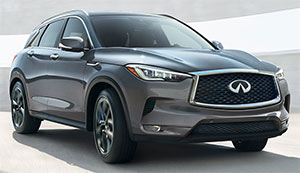 JOHN DAVIS: Third place goes to the INFINITI QX50. The sole 2019 model, it includes the first production Variable Compression engine. The combustion chambers can expand or contract for best power or efficiency. Pricing is mid-pack at $49,685.

Garick ZIKAN: “We’ve driven this 2019 QX50 before and the engineering really steals the spotlight this time around. There’s the new Variable Compression Engine, the chassis is stiffer and it’s now front wheel drive. So while its always been a luxurious ride, it’s now more engaging”

Patrick Masterson: “It’s the only one in the challenge that has two screens. The navigation was very low rez and it was also slow to respond if you were pinching and zooming. The multimedia screen was crystalline. The pixel quality was tremendous and as good as any other vehicle in the test.” 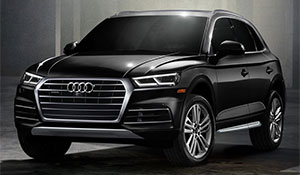 JOHN DAVIS: Coming in at number two is the Audi Q5. This sporty SUV offers a great balance between pampering and performance. At $52,275, it is 2nd highest among the group.

Brian Wong: “The Audi is a good all-around vehicle. I feel like it performed well in many of the different aspects of our testing. If I had one nit to pick with it is there’s a little bit of lag from the engine."

Garick Zikan: “The Audi Q5 is a great blend of luxury and athletic ability. The design inside and out is very clean and modern and it’s comfortable, while at the same time holding on to those firm and stable driving characteristics we like so much in European sport sedans.” 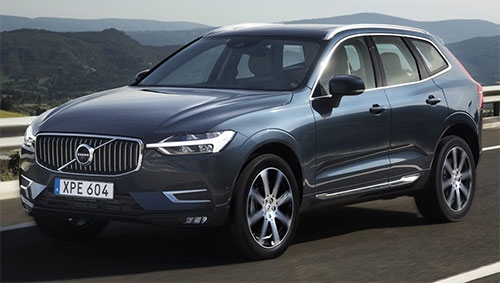 JOHN DAVIS: That leaves the Volvo XC60 as our winner. No surprise to us. Volvo took everything we liked about the larger XC90 and presents it in a smaller package. Even with comfort and spaciousness comparable to a midsize ute, pricing was a relative bargain at $50,540.

Ashish Bodhanwala: “What’s interesting is my wife had the XC60… the old one… and I liked the car other than some reliability issues. This one I like it. It seems a little bigger. I definitely like the infotainment system… much much better than what we had in the old Volvo.”

KELSEY MAYS: “Really easy to see out of. Roomy first and second row. Lots of multimedia technology and lots of kind of driving tech. This was the only car in the test to have lane centering steering that worked all the way down to a stop. That’s a semi-autonomous feature that really puts the XC60 ahead of the other as tested vehicles.”

“The Volvo brings a lot to the driver’s seat. There’s plenty of power, the transmission is smooth… it handles well and its very comfortable.”

JOHN DAVIS: Utility sales are strong across the board. And while they have to be ranked, in this premium segment they all have a lot to offer. But Volvo is clearly on a roll, and the Volvo XC60 stands out in this crowded field of great down-sized luxury utilities.