After years with little-to-no news, and only declining sales to report, the midsize truck scene is now booming. So the natural question is, which one is best?  Well, figuring that out is what we’re here for. Join us and cars.com as we take a look at the expanding midsize truck landscape to find out where your dollars are best spent.

In the world of pickup trucks, there’s a constant battle to one-up the competition. And this endless escalation has caused trucks to grow bigger and bigger seemingly every year.

So, it’s no surprise that small…or what we once called “compact” pickup trucks…aren’t so small anymore; with capabilities and presence closer to what we saw in the full-size ranks a generation ago.

We’ve assembled four of these now named midsize trucks in the suburbs of Chicago where our friends at cars.com call home.

…and without a doubt the most exciting thing to hit this segment in some time, the Jeep Gladiator…

All have four or all-wheel drive, and automatic transmissions ranging from 6 to 10-gears.

Most sport V6 power; the lone exception being the Ford Ranger, with its EcoBoost turbo-4.

The obvious glaring omission here is the best selling Toyota Tacoma, with Toyota choosing not to be a part of this comparison. The Nissan Frontier is also available, but hasn’t been significantly updated since George W. Bush was in office, and we felt would not be competitive with these newer designs.

In addition to the usual accounting for features, specs, price, comfort, and ride-and-handling; we hit the track to get some hard numbers, both in stock form, and with a 1,000-lb. payload in the bed.

On to the results… 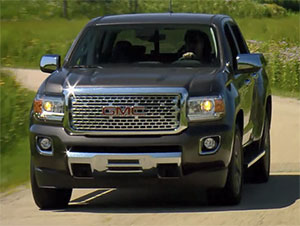 Someone has to finish last, and unfortunately for GMC, it’s the Canyon. It’s a real truck that can get real work done, but even with Denali upgrades, the interior is nowhere near as pleasant as the newest designs.

BRIAN ROBINSON: “The Canyon has a really great ride to it and it’s very quiet inside; unfortunately, the rest of the driving experience is not as great, it’s not very comfortable, and the interior is not up to the specs of the rest of these vehicles.”

MIKE HANLEY:“…for a Denali model, I thought the GMC’s interior wasn’t that impressive, and it was missing a lot of features; ours didn’t have remote start, and the driver’s backrest was manually adjustable; it just didn’t feel nice enough for what you’re getting and what you’re paying.”

In a bit of surprise that will no doubt cause a minor uproar, 3rd place goes to the Jeep Gladiator. If you’re a Jeep enthusiast, we’re pretty sure you’ll love everything about the Gladiator. But, if you’re the average consumer, not looking to conquer the Rubicon trail, and are just looking for a pickup truck, you can do better.

For starters, it has the least payload capacity here by far, and was the slowest at the track, both with a load and without. Though the 285-horsepower 3.6-liter Pentastar V6 never felt underpowered on the street, and the overall powertrain is quite refined. 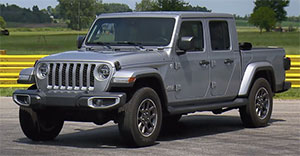 But add in that the Gladiator was a full $10,000 more than any other truck here, and you’ll get why things shook out the way they did.

AARON BRAGMAN: “…the Gladiator is really kind of a strange one; it is more than just a Wrangler with a truck bed on the back, it has received some significant engineering to really make it into a very useful pickup truck, but it’s super-long, it’s very narrow, it’s not all that comfortable…”

BRIAN ROBINSON: “I love the idea of the Gladiator, and most of its reality as well; it’s every bit a Jeep and a lot of a Ram, but it does require a commitment to deal with the interior on a daily basis, and when you’re driving it, it’s definitely a two-handed affair as it’s prone to wander going down the road; but those are all Jeep things I just may not understand.”

Much more capable than the original, the reborn Ford Ranger has pretty much once again defined the midsize truck segment. Emphasis on the truck part, The Ranger feels like a real truck true-and-true, inside-and-out. That means a firm ride, and comfort that falls short; relegating it to runner—up status. 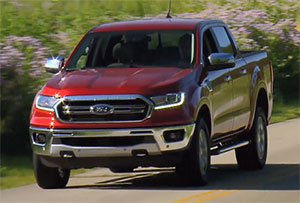 It’s also pretty narrow, which makes the interior feel cramped and not as roomy as most. Acceleration from the tiny turbo was impressive, however; 7.2-seconds to 60, and barely even acknowledging the fact that we’d added 1,000-lbs to the bed; it’s 8.2-second run was quicker than the Gladiator with an empty bed.

AARON BRAGMAN: “…You wouldn’t expect a turbo 4-cylinder and a 10-speed automatic to really be a great combination for a small pickup truck, but it’s outstanding; the thing is so responsive, so quick and nimble, I think it’s really probably the best powertrain in this test…”

BRIAN ROBINSON: “The Ranger really raised the bar when it came to capability for a midsize truck when it returned last year, but it definitely has the most truck-like ride and comfort is not as good as most of the others here.”

That makes the Honda Ridgeline our winner. Sure, it doesn’t fit a lot of people’s definition of a truck, but it’s hard to argue with what it has to offer. Oodles of space, tons of features, and loads of value with the lowest sticker here, at $42,965. Sure, you won’t get much cred at the local off-road park, but you’ll have the last laugh when you can store 7.3 cubic-ft. of cargo under the bed floor, and then pile as much as you want in the bed itself.

Granted, you can’t tow as much either, limited to 5,000-lbs; but comfort and space inside are far above the rivals here.

BRIAN ROBINSON: “Everyone likes to hate on the Ridgeline, including myself at times, but you have to admit, it does a lot of truck-like stuff well, and it has a ton of features that the others don’t, and when it comes to going on a long road trip, it’s absolutely the one you want.”

BRIAN WONG: “The Ridgeline has SUV roots, but I don’t see that as a negative, it’s actually the most family-friendly of all the pickups that we had here; it had the best car seat scores, and it has really good interior storage spaces to keep things for children.”

So, unless you’ve got lots of heavy hauling to do, the Honda Ridgeline is all the truck you’ll need; and the one we most enjoyed our time in.

But, if you’ve got more work to do, one of the other contenders will surely fill your bill.

In fact, most personal use buyers will find more than enough capability, not to mention maneuverability, and garagability, in the midsize truck ranks. They’re more capable and better than ever.