Once again we teamed up with our friends at Cars.com for this all’s-square-in-love-and-war fact-finding mission. As our collective automotive attention is directed to that humble family staple, the minivan.

Last time around, in 2011, the Honda Odyssey took the top honors, but will it have what it takes this time?

Well, the list of contenders challenging the Odyssey is a predictable one….

…along with its stablemate and the original minivan, the Dodge Grand Caravan…

…and of course the Toyota Sienna…

All candidates are automatic V6-powered 2015 models; and all are front-wheel-drive, except for the Toyota Sienna which is the only minivan currently available with all-wheel-drive. Pricing varies significantly with a spread from under $34,000 to over $47,000.

The only glaring omission here is the Quest, as Nissan chose not to participate.

Our Southeastern Wisconsin location proved to be a good one; providing plenty of urban sprawl to navigate through without a lot of big city traffic congestion.

And as usual, we were aided by a growing family on the hunt for some practical new transportation.

Not surprisingly, the bottom 2 places were occupied by the aging Chrysler pair. And the Dodge Caravan actually came out ahead of its pricier counterpart due mostly to a huge price advantage and oddly enough, a smoother ride quality. But perhaps our expectations were just a little too high for the Town and Country.

Jennifer Geiger: “So, the Town and Country is probably my least favorite van; on the plus side, it’s got a really nice interior, luxury finishes, leather seats…it also has really great flexibility with the Stow ‘n Go seating and the 3rd row tailgate seat.”

Kelsey Mays: “The Dodge Grand Caravan offers significant savings in this test versus its fairly loaded Chrysler twin, the Town & Country, and it checks a lot of boxes for minivans; pretty good visibility, lots and lots of storage, and the available Stow ‘n Go seats, which our test car had, allow you to maximize that cargo room and take those 2nd row seats with you instead of having to fit them in the garage.” 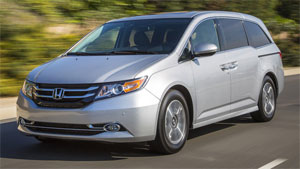 JOHN DAVIS: From there it was our reigning champ, the Honda Odyssey. It’s still a great choice for families, and of course remains a big seller; but facing the heavily upgraded competition here, has seen it fall down the rankings.

Brian Robinson: “The Honda Odyssey has been a leader in this segment for a long time now for good reasons; it has a lot of nice features, very well thought out, comfortable ride, but it’s no longer leaps and bounds ahead of the competition as it used to be.”

Jennifer Geiger: “The Honda Odyssey really delivers in the features category; it’s got the awesome Honda Vac, it’s got this really cool Cool Box you can chill juice boxes or pop in; it also has a really easy 3rd row that folds, they call it the Magic Seat; it folds super quickly into the floor for loads of storage space.” 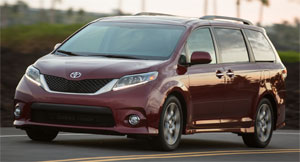 JOHN DAVIS: The battle for the top spot was a very close one, with the Toyota Sienna falling just short. Recent updates have made the Sienna a prime choice, and of course if you want all-wheel-drive it’s your only choice.

JENNIFER NEWMAN: “The Sienna should win the most improved award at this challenge; its refreshed design helps it keep up with the Odyssey and the Sedona; however, there’s still room for improvement.”

Brian Robinson: “The Sienna is very quiet, has a smooth ride, and I love the interior control layout there in the center stack; everything is grouped together, lots of nice, big buttons and knobs.” 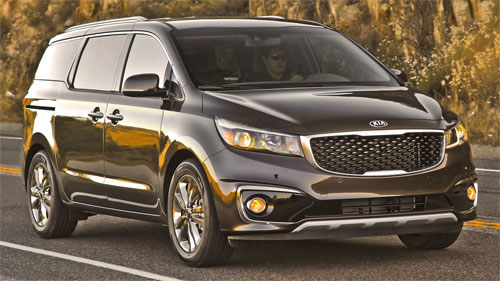 JOHN DAVIS: And so, it looks like the Kia Sedona is the Ultimate Minivan. Though it has been around since 2002, it’s taken the total redesign of its new 3rd generation to rocket it to the top.

Andrew and Andrea Thueme: “We really liked the whole steering area up front with all the dials and everything; it was very clean and sleek there; and we really liked the side and back cameras… …all the cameras on it; we live in a subdivision, lots of kids running around, and being able to see, making sure we don’t have somebody in an area that’s going to be a natural blind spot; and it just felt a little more safer.”

JENNIFER NEWMAN: “For me, the Kia Sedona blends just enough family friendly features with a quiet ride and a powerful engine to make it land on top.”

JOHN DAVIS: While crossover utilities continue to eat away at minivan sales, there has been a slight minivan resurgence of late, led by new efforts like the Kia Sedona and revamped Toyota Sienna. That may get a further boost when a new Chrysler design arrives next year. After all, a minivan is still the most practical vehicle on the road for family duties, no matter which logo is on the grille.