PERFORMANCE CARS COME IN ALL SHAPES AND SIZES THESE DAYS. BUT WHEN IT COMES TO THE TYPICAL AMERICAN MUSCLE CAR, WE’RE ONLY TALKING ABOUT THE FORD MUSTANG, CHEVROLET CAMARO, AND DODGE CHALLENGER. AND, THEY’VE ALL BEEN THROUGH MAJOR UPDATING OF LATE, SO LET’S GATHER THEM UP, PUT THEM HEAD TO HEAD, AND SEE WHICH ONE LAYS RUBBER TO THE TOP!

There’s no getting around it, some comparisons we do with our friends at cars.com are just more fun than others. And this look at American muscle sure beats minivans and crossovers!

We’ve got a Chevrolet Camaro SS, completely redesigned for 2016…

…going up against a Dodge Challenger 392 HEMI Scat Pack Shaker…

…and a Ford Mustang GT, which of course were both all-new for ’15…

To make matters even better, we’re in sunny Arizona for plenty of both street and track time to put these cars through their paces and pick a winner. And helping us in that mission is a local gearhead, and former Mustang owner.

No price cap or fuel economy requirements here, but all of these rides are equally equipped with V8 power and manual transmissions.

While the Dodge Challenger is flexing the most muscle here, with a 6.4-liter V8 outputting 485-horsepower and 475 lb-ft. of torque.

Our first step was getting to know our contestants; checking out the styling and features, as well as putting in some street time.

Jason Kadah: “…it sounds amazing, it’s fantastic, it handles great, it feels solid, the visibility inside the Challenger I’d say is better than the others; but without a doubt it really looks the part more so than any of the 3 muscle cars that I tested.”

Aaron Bragman: “The Camaro SS, I think, was probably my favorite car out of the entire test; it does just about everything extremely well, it brakes, it accelerates, it handles really well, it’s comfortable even for somebody my size.”

John Davis: Then it was off to Wild Horse Pass Motorsports Park for a ¼-mile showdown. You know how this works, worst to first. Starting off, is the Mustang with a 0-60 of 4.7-seconds and a ¼-mile time of 13.2-seconds at 111 miles-per-hour.

The Challenger may have had the most muscle under the hood, but it got off the line the slowest at 4.8-seconds.  That big engine makes up for it somewhat down the ¼ though, as its 12.9-second run, at 112 miles-per-hour was the 2nd quickest.

Joe Bruzek: “…it’s just effortless to go fast in this thing; in the ¼-mile it was, you know, nearly a full second faster than the Mustang… …it’s light it has that big throaty V8, the optional dual mode exhaust lets you know you’re driving this powerful coupe… …the easiest to drive fast and man is it fast.”

John Davis: Next, it was time for throwing in a few curves, hitting the road coarse to see which of these cars chassis’ makes the best use of all of that power.

Here, things were more subjective; but all could agree that the amount of capability packed in these rear drive monsters for the money they cost, is something that wouldn’t have been predicted 20 years ago.

But again, it was the Camaro that proved the most capable, while the Challenger’s big motor/soft chassis proved to be a real handful, and the Mustang’s nimble nature did it’s best to make a case for being the most enjoyable.

Brian Robertson:“On the track, the Mustang GT feels great, despite having the least horsepower; what power it does have, it lets you use all of it; it comes out of corners in a hurry, the shifter is great, transitions in corners are great, it really has a light feel to it.”

John Davis: So after all of that, time to put some hard numbers in place and declare an overall winner. That full scoring breakdown can be found on the cars.com website, but here’s our wrap up.

In a bit of a surprise, it’s the Mustang GT coming in 3rd place. While it’s clearly a fun-to-drive car with plenty of potential, in stock GT form it’s also relatively mild compared to the rest of this group.

Aaron Bragman: “The Mustang GT was a lot of fun on the track; but one of the things I really can’t stand about it are those Recaro seats… …it’s a matter of adjustability, they don’t adjust on the seat bottom enough for a number of different people on this test, and it was just uncomfortable.”

John Davis: 2nd place goes to the most muscular looking of the pack, the Dodge Challenger. It clearly fits everyone’s definition of a muscle car, but it’s “too tough to tame” track nature kept it from earning the top spot.

Brian Robertson: “The Challenger is everything you want a muscle car to be; it’s big, it’s loud, it looks aggressive, it’s kind of a handful at times, it can even be scary; but every time you get behind the wheel and fire it up, it puts a big smile on your face.” 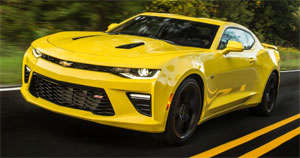 John Davis: So, it’s the Camaro that walks away the winner in this challenge, and it was certainly the most capable on the track.

AS MUCH AS WE LOVE V8 MUSCLE IN OUR MUSCLE CARS; THE TRUTH IS, THE MAJORITY OF THESE PONIES THAT RIDE OUT OF DEALER SHOWROOMS ARE RUNNING ON ENTRY-LEVEL POWER WITH FEWER CYLINDERS. RATHER THAN ON TRACK PERFORMANCE, THEY’RE ALL ABOUT LOOKING THE BAD BOY PART WHILE KEEPING THINGS ON THE DAILY DRIVER DOWN LOW.  HERE’S HOW ENTRY-LEVEL POWER FROM THE BIG-3 STACKS UP.

So now that we’ve already seen how the V8’s fare, time for our crew and the cars.com folks to take a look at how these machines match up with fewer cylinders under the hood.

Which means that we’ve got a Chevrolet Camaro and Dodge Challenger with V6’s, going up against an EcoBoost-4, Ford Mustang.

In a reversal from the V8’s, it’s the Challenger that comes in with the least power here. Their 3.6-liter V6 rates 305-horsepower and 268 lb-ft. of torque. 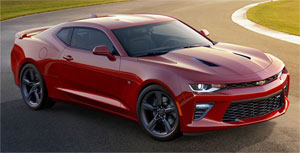 While the Mustang’s 2.3-liter turbocharged I-4 slides in between at 310-horsepower, yet is tops in torque at 320 lb-ft.

With automatic transmissions for all, it’s off to the drag strip to see what happens once we start putting the torque down to the pavement. The Challenger hit 60 in 6.3-seconds and cleared the ¼-mile in 14.5-seconds at 97 miles-per-hour.

Joe Bruzek: “…it embarrassed the rest of the cars on the drag strip, and that 8-speed automatic transmission just works fantastic with the powerful V6 engine.”

John Davis: While not as turned for fast corners as the V8s, we still wanted to sort out this trio’s track worthiness on a road course.

Aaron Bragman: “I think the EcoBoost Mustang is one of the most fun vehicles in this test; it feels so very completely different than some of the other muscle cars here; it’s light, it’s tossable, it has plenty of power from that turbo-charged 4-cylinder.”

John Davis: With numbers and plenty of street and track impressions in the bag, it was time to declare a winner. For a full breakdown of scores, head to cars.com; but here’s how things shook out.

Coming in 3rd was the Dodge Challenger. Much like its V8 counterpart, though a very comfortable car; it’s just too old school muscle while the rest of this class has moved on. And it doesn’t really bring that much muscle to begin with.

Joe Wisenfelder: “With the V6, the Challenger is by no means slow, but it’s not the quickest of the group; it’s a little bit more of a family car that looks great and actually turns a corner reasonably well for what it is.”

John Davis: This time 2nd place went to the Chevrolet Camaro. While it had tons of track performance, it fell short in the most important environment for non-V8 muscle cars.

Brian Robertson: “The more time I spend in the Camaro on the street, the less I like it; don’t get me wrong it’s way better than it used to be, but the inside is still cramped and the visibility is still atrocious.” 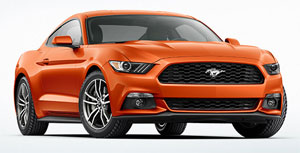 John Davis: That leaves the EcoBoosted Ford Mustang for the top spot here in this “I could have had a V8 challenge”. It may not have been the most capable at the track, but it clearly was the most fun; and its street manners were the top of the class.

Joe Bruzek: “So what I really like about the EcoBoost Mustang is just its big midrange power, you know once that turbo starts kicking and you’re in the right gear it pulls really hard and especially on the track; I was very surprised by how crisp and how sharp the throttle was on the track for a turbocharged engine.”

Brian Robertson: “So the EcoBoost Mustang really does have that more of a European sports car feel than outright muscle car; and that’s just fine as it opens it up to a whole new class of buyer.”

John Davis: While it’s easy to view all these pony cars as finishing well behind their macho V8 kin, each still delivers performance above and beyond their V8 ancestors of even a few short years ago. Plus, all are much easier to live with, and insure, on a daily basis. So, yeah you could have had a V8, but these days, to show your muscle, you don’t have to.