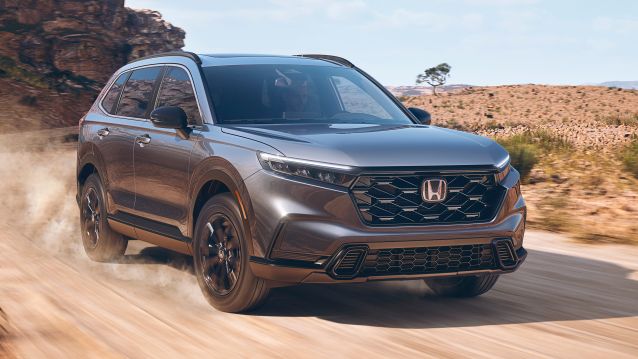 The CR-V has become one of the most recognizable and beloved name plates ever since arriving in the U.S. over 25 years ago. And being Honda’s best-selling model, an all-new sixth generation is here for 2023.

Gone is the base LX model, making EX the CR-V’s new starting point. That also means base pricing is significantly higher than the outgoing model, now starting from $32,355 after destination. That’s an increase of over $4,000 compared to the last gen LX.

Four total trim levels keep it simple: EX and EX-L will see the same 1.5-liter turbo-4 engine with a few updates including a new turbocharger. It still outputs 190-horsepower and 179 lb-ft of torque and is paired with an updated CVT. Sport and Sport Touring models will feature Honda’s all-new 4th-generation hybrid system.

But the details on the hybrid will have to wait because the non-hybrid turbo model is going into production first. And Honda brought us out to Nashville, Tennessee to get behind the wheel for a brief First Drive.

You now have three drive modes to choose from: ECON, Normal, and an all-new Snow mode. Plus, it also has Hill Descent Control.

And say goodbye to the CR-V’s old rounded exterior, now replaced with a much more squared off and modern look. Length increases by 2.6-inches which allows for additional rear-seat legroom but cargo capacity stays the same and that is fine with us since it still leads the class.

“It’s pretty obvious when you look at the exterior of this new CR-V that it’s larger than the previous generation but it's not so obvious sitting in the driver’s seat. I feel like I’m driving a compact crossover. It certainly doesn’t feel bigger and it’s still very comfortable and smooth on the road.”

EX and EX-L models have a gloss back grille, body color side mirrors, and 18-inch alloy wheels. Plus a new roof spoiler and familiar all-LED vertical taillights.

Inside sees an all-new interior, modeled after what we’ve already experienced in some of Honda’s recent releases.

The EX comes standard with a 7-inch display while the EX-L upgrades the screen to 9-inches. Both have a 7-inch digital instrument cluster and Apple CarPlay & Android Auto are standard, wired on the EX and wireless on the EX-L.

“I’m a big fan of Honda’s design language outside but also inside. I love this new interior. We’ve seen it in the Civic, very similar to the HR-V, and it’s translated really well here in the CR-V. Plenty of knobs and buttons but there’s also still plenty of tech. I think it’s a really good middle ground for people who may not be quite so tech savvy but the buyer who still wants all of those modern amenities.”

The 2023 Honda CR-V is set to arrive in dealerships by the end of this month with the hybrid following later this fall.

We’ll have more on all things CR-V, including a first drive of the new hybrid model, coming soon…on MotorWeek!