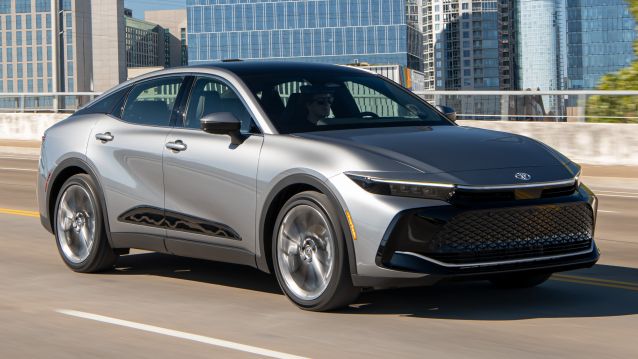 Where some brands don’t see much of a future for big sedans, Toyota sees an opportunity to launch an all-new one, the 2023 Toyota Crown.  Though the Crown is far from new.

Existing in Japan since 1955, it was the first Toyota sold here in the U.S.; though out of our market since 1972, the Lexus GS shared its platform for many years.

Now in its 16th generation, the Crown returns to the U.S. as a replacement of the Toyota Avalon, bridging the gap between Toyota and Lexus.  And we’re just back from some Quick Spin seat time in Nashville, Tennessee.

And this Crown appears to be designed to compete with crossovers more than other sedans, having a higher than typical ride height and standard all-wheel drive.  All are hybrids as well.

BRIAN ROBINSON: "With that taller stance and the AVS set to Comfort, the ride is quite plush, which does lend a more upscale feel to the Crown.  But switch it over to Sport or Sport+, and it holds its own in the corners just fine too; and the Hybrid MAX feels plenty powerful in all of your typical driving situations."