You’ve probably heard us use the term “win on Sunday, sell on Monday” on more than a few occasions. And in most cases, we were referring to mass-marketed cars that share little more than styling with their racing counterparts. But in the case of an effort like the rare Roush Stage 3 Mustang, the racing connection is far more than just skin deep. In fact, with a record of success in everything from Winston Cup to Trans Am, the Roush racing team couldn’t build anything but a genuine article. So what’s it like to drive a real race car every day?

How about sensational! Exhilarating! Invigorating! And stimulating! All these adjectives aptly describe the feeling of getting behind the wheel of the 2000 Roush Performance Stage 3 Mustang.

And the primary generator of those wonderful feelings is Roush’s supercharged version of Ford’s 4.6 liter, SOHC, V-8. Exact horsepower numbers aren’t available, but an estimate of 350 is a good start, with torque rated at an estimated 370 pound-feet. The Roots-type supercharger is set up to produce a maximum boost of 8 psi. And, after getting use to the hefty clutch, 0 to 60 will pass in only 5.1 seconds, and the quarter mile mastered in 13.5 seconds at 104 mph. So we think that horsepower estimate is a little on the conservative side.

Launches do require a judicious application of the throttle to avoid overwhelming wheelspin, unless of course, you’re into that sort of thing. Then, it’s burnout city. But once under way, the Stage 3’s prodigious power continues to build all the way to the redline. Our driver’s liked the short throw linkage in the 5-speed manual transmission, but noted its notchy character took some patience to master, especially when attempting quick shifts. Now, if you’d rather not deal with it, an automatic is available. But equip your Stage 3 that way, and be prepared for the ridicule that will come with it. 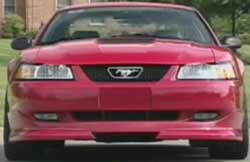 Now, race fans know that Jack Roush knows a thing or two about preparing a car for cornering and it’s evident on the Stage 3 Mustang. The carefully tweaked and tuned suspension has been lowered 1.5 inches in the front, 8-tenths of an inch in the rear. This high performance set up also includes tuned springs, Bilstein shocks, heavy duty front and rear sway bars, and beefier rear lower control arms.

The results are nothing short of remarkable. Cornering is plateau flat and the gummy tires and tight suspension give the car a rock-solid feel that does wonders for boosting driver confidence. Steering inputs are spot on and immediate feedback gives the driver the feeling of being intimate with the road. Mid-corner corrections are effortless, and despite the engine’s tremendous power, at no time do you feel like you’re fighting the accelerator for the control of the car.

Helping maintain that control is the completely re-engineered braking system. It features large zinc-washed, cross-drilled rotors, Alcon six-piston calipers, braided steel brake lines, and high performance brake pads. Fade is a word with little meaning here. Our Stage 3 tester also came with the optional anti-lock braking system, and together this set up brought us to a halt from 60 in an average of 108 feet. Pedal feel and ABS feedback are excellent, and the car remains very stable with just a touch of nose dive.

Out on public roads, where your driving habits should be a little more docile, the Stage 3 handles its forced domesticity with aplomb. Although we must say, this Roush is loud. And a challenge to your self control. As we found that nearly every wannabe race-boy was ready to run as soon as they saw the Roush stickers and emblems on the car, and the aggressive front end treatment, the side mounted exhaust system that peeks out from behind the rocker panels, and the prominent rear wing.

But other ways in which the Roush Stage 3 is suited to domestic life can be found in the interior. Because unlike the Ford SVT Cobra R, which features a bare bones approach to interior amenities, the Stage 3 interior is pretty much unchanged from the Mustang GT from which it is derived. With the exception of the special Roush bucket seats with leather trim, Roush pedals, pseudo carbon fiber overlays, and a fire extinguisher, the rest of the interior layout is stock FOMOCO.

There’s nothing stock about the price however. The Stage 3 carries a list price of $42,000 and can only be purchased through a network of approximately 250 Roush certified Ford dealers across the country. But the Roush Performance corral also includes two normally aspirated Stage 1 and Stage 2 models for those on a tighter budget.

This 2000 Roush Performance Stage 3 Mustang is a fine example of why pony power today is stronger than ever. And for those looking for an edge, the supercharged Stage 3 is ready and willing to give you and the competition a swift kick in the pants.