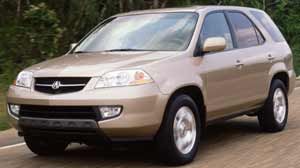 With the unstoppable popularity of SUVs, it’s no surprise that nearly every automaker on the planet wants to sell one. Now some, like Acura, formed partnerships to re-badge an existing SUV to quickly establish a presence. But in an increasingly crowded and fickle market, they learned that buyers are looking for something unique. And, it’s hard to call something your own when it’s running around under two or three different names. So for Acura, the answer was to hit the drawing board with one goal in mind, to create an Acura SUV that would set new benchmarks in luxury SUV performance. And they call it the MDX.

And we call the 2001 Acura MDX one of the smoothest running and handling SUVs on the planet. As Acura designers and engineers have struck a near perfect balance between a sophisticated sedan and capable sport utility. 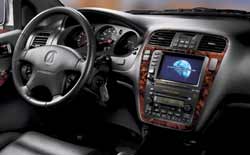 And it’s evident the instant you open the door and slide into the wide, roomy interior. Once behind the wheel, you’ll appreciate the comfort and support offered by the 8-way power, perforated leather bucket seat. Choose the MDX touring package, and the front passenger seat gains power adjustments, too. Seat heat for both is standard. The center stack to the right provides a home for the automatic climate controls, Acura’s DVD-Satellite Navigation system, and a cassette/CD stereo.

Move to the back and again you’ll immediately notice how easy it is to enter and exit. And while the seat bottoms are rather flat and firm, the seat backs are reclinable, and there is plenty of leg room. Should you decide to take on a couple of extra passengers, the MDX can handle them too. With these clever third row seats that pull up out of the floor when needed. Fold both the third and second row seats and the MDX will accommodate 81.5 cubic feet of your most treasured stuff.

And with this smooth 3.5 liter, single overhead-cam, 24-valve, VTEC, V-6 under the hood, move them just about anywhere you want in a civilized manner. This 50 state ultra-low emissions engine is deceptively powerful too. With 240 horsepower and 245 pound-feet of torque on tap, the MDX took us to 60 in only 7.6 seconds, and on through the quarter mile in 15.9 seconds at 87 mph. The wide ratio 5-speed automatic transmission delivers seamless shifts, although a more aggressive downshift would inspire more confidence when passing.

But there’s no lack of confidence when it comes to the MDX’s lightweight, Variable Torqe Management four-wheel drive system. VTM-4 uses an open front differential and electronically controlled clutch packs to deliver power to the rear wheels when needed. But, unlike some systems that are activated only when wheel slippage is detected, the VTM-4 system anticipates the need for all-wheel drive and engages the rear wheels before wheel slip occurs. The system seems perfect for all-weather on-road applications, and modest off-road work.

The driver can also temporarily lock the front and rear axles together to help extract the MDX if it gets stuck. The gearshift must be in first, second, or reverse, and the system unlocks at 18 mph. Once unstuck and up to speed, with 4-wheel disc, 4-channel ABS brakes, the MDX is fully capable of bringing you quickly to a halt. But it’s not without a little drama. With average stops from 60 of 132 feet, our drivers noticed a tendency for the rear end to step out slightly, causing the need for a bit of correction.

The same stepping out characteristic was noticed in runs through our low speed slalom as well. Due most likely to the soft springs of the fully independent suspension and the MDX’s healthy 4,328 pound curb weight. But out on the road, that softly sprung suspension pays big dividends. As the MDX offers a ride that rivals the best mid-size sedan.

Acura is expecting the MDX to pay big dividends in the showroom as well. And with a well equipped model priced at an estimated $35,000, their sales goal of 35,000 to 40,000 units in the first year should be no problem.

With an increasingly selective, but still SUV-thirsty public enjoying the ride of a robust economy, the 2001 Acura MDX is another tantalizing choice at the burgeoning sport-ute buffet. And while Acura may be a bit late to the SUV party, at least this time they’re coming in their own ride.