Whenever a car maker delivers a special edition or performance version of an existing model, that specialness is often indicated by adding to the vehicle name an extra letter designation like “S,” or the word “Sport,” or even “Limited.” Now sometimes the extra letters have a real meaning, and sometimes not. But since 1950, Aston Martin has used the word “Vantage” to designate its highest performance models. And our DB7 tester carries that postscript. But the skeptics among us wonder, does Aston Martin’s definition of that little word really give the DB7 an ad-vantage? The answer to that question lies behind this little red button… Just give it a push, and you’ll know the not-so-secret ad-vantage held by this DB7 Vantage over other Aston Martins…and just about every other car on the road, too! 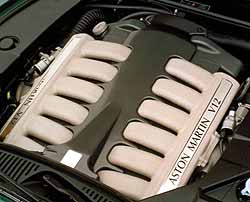 And that ad-vantage is this Cosworth-designed 6.0 liter quad overhead cam V12. The rumble you hear is the tune produced by 420 horsepower and 400 pound-feet of torque. It sounds ferocious, even at idle. Rev it up and let it go, and you’ll soon find yourself hurtling to 60 miles per hour in just 4.8 seconds. Before you hit the 7,000 rpm redline in third, you’ll be flashing through the 1/4 mile in 12.9 seconds at 113 miles per hour. That’ll make many a Corvette jealous! Our car shifted by way of a six-speed manual gearbox. Throws were on the long side, but very precise and accurate with a nice, weighty feel. It seems fitting that this most special edition would be the first ever Aston Martin tested by MotorWeek, so to give it a proper workout, we took it to our most secret test site. Well, not really. The twisting two miles of Roebling Road Raceway near Savannah, Georgia. Keeping in mind that the DB7 is meant to be a luxurious grand touring coupe and not a track star, we were flat astounded at the performance of this brawny Brit. The well-balanced chassis makes for mostly neutral handling, giving way progressively to understeer as the front tires became worn, understandable after two days of rapid lapping! Throttle response from the big 12 got rave reviews from our pilots. Induced oversteer is just a right foot away, and the massive torque simply catapults the Aston out of the corners. And that 420 horsepower propelled us all the way to 140 mph at the end of the front straight. That’s not quite at redline in 4th gear. Did we mention this is a luxury car? Bringing all of the Vantage’s 3900 pounds down from speed is no problem for the ABS- equipped 4 wheel disc brakes and four-piston Brembo calipers. A slight brake shudder came with our tester, but it had no effect on performance. Inside the roomy 2+2 cockpit, the driver faces a handsome gauge cluster, dominated by that reach-for-the-sky tachometer. Sharp-eyed staffers picked out some familiar-looking switchgear from parent company Ford, but overall the interior design looks, feels and smells Aston Martin exclusive. The Connolly hide bucket seats are cozy and supportive, and feature power lumbar bolsters. We do wish there was some way to adjust the seat bottom for tilt. Generous leg room, however, was a pleasant surprise. Renowned designer Ian Callum is duly proud of the DB7’s sleek, muscular lines…this is undoubtedly one of the most striking yet understated designs we’ve ever seen. No one element of the styling jumps out as being overly aggressive, but taken as a whole, the DB7 Vantage carries itself like a linebacker in an Armani suit. Don’t let the fine clothes fool you, this car is ready for action! If we had a secret bank account, we’d gladly write out a check for the Vantage’s lofty $143,000 base price. But we’d certainly pass on a few of the overpriced options, like a $400 fire extinguisher or $250 golf umbrella. Taken together they ballooned the as-tested price up to $153,465. The Aston Martin DB7 Vantage is an awesome combination of stunning looks, supercar performance and top-drawer luxury. And for the few who can drive one, that adds up to a serious ad-vantage!