In the distant past, whenever a car company wanted to include a convertible in its lineup, it simply took a popular selling model, like this Audi TT Coupe, and whacked the top off, and presto! Instant convertible. Well, today, even the most blas car buff knows this approach doesn’t exactly produce the most solid and safest of convertibles. So when Audi was developing the TT, they took to heart the axiom, “Start at the beginning, with the end in mind.” And they knew from the beginning that the TT coupe would indeed lose its lid and designed it accordingly. The result is one of the tightest little drop tops yet.

And one of the most distinctive! Like its hard top sibling, the 2001 Audi TT Roadster stands out from the crowd no matter where it goes. Especially in top-down mode. Its striking lines blending retro and modern into a look that recalls Audi’s AutoUnion race cars of the 1930s, while still retaining a cutting edge style. We love the look of those polished aluminum roll bars.

But despite its possible benefits, the rear spoiler that Audi has now tacked onto all TT Roadsters to cure a reported high speed stability problem does its looks no favors.

The power-operated soft top of our 225-horsepower Quattro test car, on the other hand, is very well integrated into the overall styling. It does, like so many convertibles, have prominent rear blind spots. But then so does the hardtop TT Coupe. And like the coupe, the Roadster has a glass rear window, with a defroster.

Lowering the top requires you to release a single, central header latch, and massage a single switch. The top then drops in about 8-seconds. On 180-horsepower Roadsters the power top is an option. However, the TT’s manual top is a snap to use, too. Once the top is down, an electrically powered glass windbreak can be raised to cut buffeting and promote conversation in the cockpit. 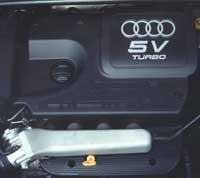 The power levels that determine which top buyers get both come from a 1.8-liter dual- overhead-cam, 20-valve 4-cylinder engine. In base form, with a single intercooler, it makes 180 horses and 173 pound-feet of torque.

Those seeking more punch can move up to the all-wheel-drive Quattro model with twin in-line charge air coolers, that deliver 225 horsepower and 207 pound-feet of torque.

Both engines utilize only manual transmissions, the 180-engine a 5-speed, while our 225- engine’s sharp-shifting gearbox gets six gears. And despite a grabby clutch, uses them to reach 60 in 7.0-seconds flat. The 1/4 mile passes in just 15.4-seconds at 94 miles-per-hour.

Power delivery feels soft at first, then kicks in hard as the turbo reaches maximum boost. Once on the pace, the engine revs quickly. But keep those revs up, or the turbo quickly loses pressure.

Handling is controlled by MacPherson strut front, and on the Quattro, multi-link rear suspension. Very well controlled that is, with sharp turn-ins, crisp transitions, and plenty of feel from both chassis and steering. Partly due also to extensive structural reinforcements in the Roadster’s floor assembly, sill areas, and windshield frame.

A sticky set of Bridgestone tires on polished 17-inch alloy wheels don’t hurt handling either. Brakes are anti-lock equipped 4-wheel discs. They stopped our Roadster from 60 in an average 115 feet. Feel and stability are excellent. The ABS hardware is also the basis for the optional, corner correcting electronic stability program.

The roadster’s interior is much the same as the coupe. But here it’s a 2-seat only affair, with the coupe’s rear seats deleted to make room for the folding top. The instrument panel looks like it came from a show car, again with a modern yet retro appeal. It’s as efficient as ever, too.

Our staff was divided on interior and seat trim, however. The optional Amber red leather, with its unique “baseball glove” stitching, is very much an acquired taste for some. Though the seats themselves are very comfortable with good support.

Behind them for cargo is the extra space not consumed by the top mechanism. While the trunk itself measures a usable 6.4 cubic-feet in volume. Liftover for loading, however, is quite high.

Prices for purchase, however, are not atmospheric for such a unique open air machine. The 180-horsepower TT Roadster starts at $33,375. Move up to the 225-horse TT Roadster, and the base is $39,075. With the optional Bose stereo and Baseball Optic Leather, our test car comes to $41,725.

It’s quite an impressive combination of high performance and high style for the price. So impressive in fact that Automobile Magazine called it “....a joy to drive, and surprisingly economical to buy and run.”

The 2001 Audi TT Roadster is everything that a 21st century sports car should be. Trick, tight, fast, and fun. The kind of car that makes other car makers green with envy and makes us wish for summer all year long.