The BMW 3-Series are among the MotorWeek staff’s favorite cars. Mainly because they’re so much fun to drive. But while low volume efforts like the M3 may offer more pure excitement than anything else on the road, we mustn’t forget that the 3-Series includes a wide range of models. Models that run the gamut from pure family to pure fun. In fact, the 2001 BMW 3-Series line up includes 10 distinct models spread across four body styles. And many of them now come with all-wheel drive. But this week we’ll focus our attention on the two newest 3- Series body styles, the 3- Series Convertible and the 3-Series Sport Wagon. Two cars at opposite ends of the 3-Series spectrum.

This 325Ci convertible is perfect when drop top cruising is in order. A manual top with glass backlight is standard. But, our premium package-equipped tester boasts a power top that requires only one button to put you in the wind. Stirring it up is an improved 2.5 liter, DOHC, VANOS-timed, 24-valve, in-line 6 that makes 184 horsepower and 175 pound-feet of torque. These numbers hold true for all 325s, including our test wagon. But the numbers at the track were noticeably different. With both cars running a 5-speed manual trans, a 5-speed automatic is also available, the heavier convertible could only muster an 8.6 second run to 60, and 16.4 seconds at 85 MPH as it passed through the quarter mile. The aptly named Sport Wagon trimmed a second off the drop top’s 0 to 60 time with a run of 7.6 seconds. It also tacked on a few MPH in the quarter mile, 15.7 seconds at 88 MPH. Now all 3-Series body styles, except the wagon, can also be equipped with a new for 2001 3.0 liter, 225 horsepower inline-6. We sampled this jewel in a 330i Sedan and nailed 60 in just 6.1 seconds, and burned up the quarter mile in 14.6 seconds at 97 MPH! However convertibles are more for getting sun burned than burning rubber. So, back in our 325Ci Cabrio, you’ll easily find an ideal tanning position with 8-way power adjustable bucket seats. 10-way sport buckets if you order the optional Sport Package. The tilt steering wheel allows a clear view of a clear, competent, if incomplete, gauge cluster. To the right in the center stack, stereo and climate controls are arranged in an accessible and logical fashion. Rear seat room in the 325Ci is snug. But that probably won’t, and shouldn’t, discourage friends eager to share your open air reverie. But they’d better be travelling light, as there is only 7.7 cubic feet of cargo space to work with. 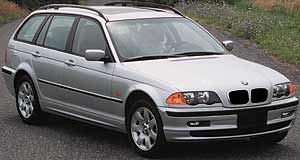 And if it’s fast cargo you’re eager for, may we suggest this 325i Sport Wagon? There you’ll find the same interior layout and appointments as offered by the Cabrio and other 3-Series models. However, the wagon comes with a versatile split folding rear seat. Seat backs up, cargo capacity is 25.7 cubic feet. Backs down, and 48 cubic feet of space awaits. But the 325i sport wagon is way more than just a bulk mover. This square-back, like all 2001 BMW 3-Series, moves your soul. The wagon attacks the low speed slalom with much of the same grace and finesse as the coupe and sedan. The rapid side-to-side transitions are wonderfully balanced and body roll inside the cabin feels minimal. The convertible demonstrates the superior torsional rigidity of its unitized chassis structure by yielding very little body flex, even when pushed to the max. Both cars are a ringing endorsement of the fully independent strut-type, multi-link suspension that offers such a compliant and controlled ride. There’s also plenty of peace of mind thrown in as well, with active safety standards like Dynamic Stability Control with All Season traction control, and Dynamic Brake Control. That, when coupled with ABS, brought our Cabrio tester to a stable stop from 60 in an average of 103 feet. With nearly 12 inch discs all around, these brakes mean serious business. And with its 3-Series pricing structure, BMW means to do serious business too. Our 2001 325i sport wagon carries a reasonable base price of $29,970. The 325Ci convertible is a little pricier at $36,560. With many of the active and passive safety features previously found only on the more upscale models, new and more powerful engines, a higher level of interior comfort, and a well deserved reputation for producing driver’s cars, BMW seems bound and determined to cover all the bases with a 3-Series car. What a pity the 3-Series team has only 10 players.