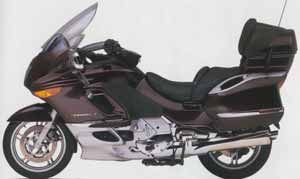 Most MotorWeek viewers know BMW as the builder of some of the world’s finest automobiles. But BMW has also been building innovative motorcycles since 1923. And the riders of those bikes are known to rack up some serious mileage. Well, the leader of BMW’s long-haul pack is this K 1200 LT. It’s got all the features that a long-distance motorcyclist demands, and a few that even BMW car buyers have come to expect.

As BMW’s two-wheeled flagship, the BMW K 1200 LT is a lot more than just another motorcycle. Like other flagships, the K 1200 LT is big. Length is 98.7-inches, while width measures 42.5-inches. That’s one very substantial motorcycle.

But also a very sleek one. BMW motorcycle stylists have long been known for their adventurous lines. And the organic flow of the big-K’s styling makes most other full-size touring bikes look like barn doors on wheels.

To keep the K 1200 LT flowing down the road, BMW has equipped it with an 1171cc version of its K-Series horizontal 4-cylinder engine. Pumping out a smooth 100 horsepower and 85 pound-feet of torque, it features twin-cams, 4-valve heads, and electronic fuel injection.

Its power is fed through a light, progressive clutch and into a 5-speed gearbox that offers crisp, positive shifts, even if our brand-new test bike was frequently reluctant to find 1st gear. It also comes equipped with an unusual power reverse gear, to pull you out of sticky parking situations. Finally, the power reaches BMW’s Paralever rear suspension, which combines the drive shaft and swingarm in a single assembly. While up front, BMW’s unusual Telelever suspension keeps the front wheel planted firmly on the pavement.

It all works together with the long 64.3-inch wheelbase, and hefty 834-pound weight, to deliver superb stability. It soaks up bumps, ripples and pavement grooves that would have smaller, lighter bikes dancing and weaving.

Power is more than adequate for a single rider. Though with the machine’s full 500- pound capacity on board, all 100 ponies are needed. And they’re very efficient ponies. On a long highway loop mixed with occasional urban traffic, the LT delivered a very satisfactory 47 miles-per-gallon. 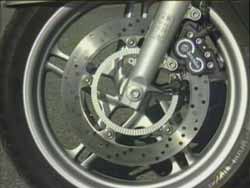 The down side of most big touring bikes is the muscle needed to move them down twisty roads, or though heavy stop-and-go traffic. And yes, the K 1200 LT is hardly a sport bike, but it is very well balanced for such a big two-wheeler. But no matter what roads you favor, you’ll find the big anti-lock equipped Brembo brakes to be strong and fade-free.

Comfort has always been important in big touring bikes, and the K1200 LT offers every feature that a long-haul rider could wish for, and then some. Such as a standard security system on our LT Custom. The windshield has a power height adjustment, and along with the massive fairing, offers superb protection from the elements. It rides above a big, comprehensive, car-like instrument cluster, and is flanked by mirrors that are bigger, and better, than on many cars. < The turn signal system, however, which consists of separate switches for right, left and cancel, is an idiosyncracy that only BMW fanatics could love. Though the switchgear for the standard cruise control is super-simple.

Above the 6.2-gallon fuel tank and on the left handlebar, are large, clear controls for the standard, 120 watt cassette stereo, and available 6-disc CD changer, which is standard on our Custom-grade bike. It’s tucked away in the integrated luggage compartment that offers up to 4.2-cubic-feet of space. But the topper is the heaters built into the height adjustable driver’s seat, passenger seat, and passenger backrest. Which, along with the Custom’s standard heated handgrips, will keep you riding well into the winter months.

Like BMW automobiles, the K 1200 LT is both a long-haul touring tool, and an excellent example of high-end motorized luxury. It’s everything that a BMW buyer demands, and expects, no matter how many wheels they choose.