One-upmanship is the auto industry’s favorite game. No sooner has one manufacturer released a heart-stopping high-end flagship, than its competitors are unleashing their own over- the-top super-cars to counter it. And the latest example of automotive can-you-top-this is this 2001 BMW Z8. It’s got all the go-fast goodies of our favorite sport sedan, the BMW M5, in a classy, compact roadster platform. So, can the competition top this?

Well, we’ll have to let the competition answer that question, if they can. But we will say, as dyed-in-the-wool car buffs, we’d love to see them try! But until then, there’s plenty of panache and performance in the new 2001 BMW Z8 to keep one amused for quite some time.

And it’s all wrapped in classically designed aluminum body panels that evoke memories of the 1950’s 507. And that’s no mistake, as BMW designers were in fact challenged to render a modern interpretation of what they thought the 507 would look like today. And believe us, pictures do not do the results justice.

The 507’s heritage is evident under the hood of the Z8 as well. Because like the 507 in its time, the Z8 showcases BMW’s most powerful production engine. The 5.0 liter, 4-cam, 32-valve, V-8 that also finds a home under the hood of the highly coveted M5 sedan. In addition to Double VANOS variable valve timing, this high-strung powerplant also employs 8 individual throttles controlled by electronic drive-by-wire technology to produce 394 horsepower and 368 pound- feet of torque at just 3,800 rpm. Run through a tight, and slightly notchy 6-speed Getrag transmission, the Z8 catapults us to 60 in a brief 4.3 seconds and thundered on past the quarter mile stripe in 12.9 seconds at 110 mph! Power is smooth and seemingly endless.

And during a few shake down laps around Summit Point Raceway’s Jefferson Circuit, our drivers noticed how easily the car can be steered with the responsive throttle. In fact, the Z8 offers a choice of either “Sport” or “Normal” throttle sensitivity settings thanks to “Dynamic Throttle Control.”

Of course it doesn’t hurt that the Z8 has an ideal 50/50 front-to-rear weight ratio. And in addition to the high-strength aluminum components in the double-pivot strut-type front and 4- link integral rear suspension, the Z8 also uses stout anti-roll bars and twin-tube gas shocks to keep the car planted and under control.

But should your exuberance surpass the red line, there’s a host of technology safety nets like Dynamic Stability Control and Corner Brake Control to keep you from hurting yourself. Not to mention the meaty 13.1 inch front, 12.9 inch rear ventilated discs, that, governed by ABS, brought us to a stable and controlled stop in 114 feet.

If there’s a chink in the Z8’s performance armor, it’s in the vague feel and anemic feedback of the steering. When it comes to ride quality, staff reaction was mixed. With some feeling the ride too harsh for a luxury oriented roadster, while others found it well suited to the car and their liking. We all agree however, the car is tight and rock solid.

The Z8’s interior also provoked mixed reactions. And while everyone concurred that materials and construction are of unmatched quality, some found the seat bottoms of the well bolstered 6-way power seats rather thin for long distance travel. Gauge placement, in the center of the dash, also took some getting used to. They have a fine watch appearance with a splash of period amber lighting. But, retro-style or not, if this is a performance car, we think the tach should be next to the driver and not on the other side of the car.

Other awkward dash items include both the ignition switch and engine start button, somewhat hidden behind the steering wheel. But the climate controls not only look trick, they’re a snap to use. So too the Multi Information Radio unit that includes a nav system and 250 watt Harmon-Kardon CD audio system.

The top is a no-brainer too, requiring nothing more than the push of a button to lower. To raise, you do have to grab the header handle and pull the top down several inches to meet the windshield at the end of the cycle. Once aligned, it automatically locks into place. Leaving you with 5 cubic feet of cargo space in the trunk. Just enough room for a weekend getaway for two. 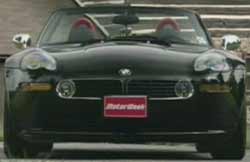 As some of you may recall, the Z8 was James Bond’s four wheel mode of transportation in 007’s latest flick. And while all the money in the world probably won’t get you a vehicle equipped with the “special” amenities that came on his car, it will get you a pretty well equipped Z8.

With its classic styling and ultra-modern powertrain and suspension, the BMW Z8 offers the well healed roadster enthusiast the best of both worlds. And while we can’t wait for the competition to try and top the Z8, with plenty of top-down weather still on tap, we’ll be quite content to un-top this rare roadster every chance we get.