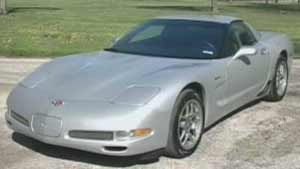 For nearly 50 years, it’s been this country’s favorite, and sometimes only, homegrown sports car, and a car that showed the world what America was all about. And now as we enter the 21st century, the Chevrolet Corvette still stands tall as the apex of America’s big, bold, and brash high performance design. And the king of the Corvette hill for 2001 is the return of the Z06. But after all these years, and a slew of smaller, high-tech imported competitors, some critics question whether the Corvette formula is still valid. Well, if you want our opinion, you’d better hang on!

And, we mean hang on tight! The 2001 Chevrolet Corvette ZO6 is the most all-out, in- your-face Corvette since the legendary ZR1, starting with a 385-horsepower pushrod V-8, and neck-snapping 0 to 60 acceleration of a mere 4.5 seconds.

Now that we have your attention, the Z06 is distinguished from other 2001 Corvette hatchback coupes and convertibles by its hardtop-with-a-trunk body style, new lower fascia with functional air intakes, and working air scoops on the rear rocker panels for improved brake cooling, plus the obligatory Z06 badges on the front fenders proclaiming this as the Corvette line’s new performance leader. 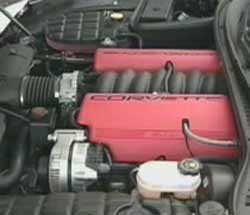 All those ponies then gallop through a standard 6-speed manual transmission, with a new high strength clutch. The clutch delivers noticeably smoother feel than before, with less pedal effort. And no automatic is available.

Beyond the gearbox, a thicker aluminum alloy driveshaft spins the Z06-exclusive wheels and tires. Up front, 17 by 9.5-inch alloys wearing special 265/40 Goodyear Eagle F1 SC tires. While the huge rear footprint is courtesy of 18 by 10.5-inch rims with 295/35 SCs. And all are ZR speed rated. And once spinning, rocket the Z06 through the 1/4-mile in 13-seconds flat, with a trap speed of 113 miles-per-hour. Top speed is a blistering 168.

The Z06 thunders off the line like a jet, but really kicks in the afterburner at around 5,000 rpm. And all with just the right combination of smooth delivery and rowdy exhaust rumble. What an engine!

The original ‘63 Z06 denoted a race-ready suspension package. The ‘01’s new FE4 suspension is at home on all pavement. It sports a larger front stabilizer bar, stiffer rear leaf spring, and increased negative camber to keep the tire tread flatter during cornering. Which, when coupled with the Corvette’s Active Handling system, makes the Z06 stick like super glue, even on the challenging curves of West Virginia’s Summit Point Raceway! That traction increase is especially evident in the rear, where oversteer has been drastically reduced. That tremendous traction, and the lightning-quick Magnetic Variable Effort steering, led one tester to call the Z06 “the biggest go-kart that I’ve ever driven.”

And when you need to stop, a quartet of 12.6-inch brake discs and standard ABS haul it down from 60 in an average of only 104 feet! Our testers loved the rock-solid feel, and plentiful feedback, but thought the pedal feel to be a bit on the soft side.

Put through its paces on public roads, the Z06 delivers a firm, yet compliant ride. And while not as silent a ride as a Lexus, the Z06 at speed is surprisingly quiet for an ultra-high performance sled. And with nary a squeak or rattle to be heard. In addition to improved noise and vibration control, the Z06 adds new seats with increased lateral support. And a new, snap to read, analog gauge cluster. Plus that quite generous, 13.3 cubic foot trunk.

Or as our friends at Automobile Magazine said after driving the Z06: “...it’s deeply pleasing to see American automakers doing a job as well as their rivals, but doing it more affordably.”

So after 50 years as America’s favorite homegrown sports car, the 2001 Chevrolet Corvette remains the apex of American high performance design. And with the rebirth of the Z06, a machine capable of challenging, and beating, the best the world has to offer.