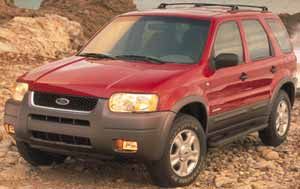 Regardless of where your automotive loyalties lie, when you take a look at the success of the Ford Motor Company when it comes to trucks and SUVs, it’s hard not to be impressed. Their F-series pickups and mid-size Explorer SUVs are perennial favorites with buyers year after year. And the recent introduction of their giant-ute, the Excursion, really shook up the market. But what about the emerging market for small SUVs? Why has the number one name in trucks not yet fielded a cute-ute? Well, soon they’ll be no escaping a Ford-tough SUV on even the smallest scale.

But let’s not put too much emphasis on the word “small,” because even though the 2001 Ford Escape is the smallest SUV in Ford’s formidable stable, when stacked up against its competitors, it’s anything but.

For instance, the 103.1 inch wheelbase that supports the unibody platform the Escape shares with Mazda’s new Tribute is one of the longest in its class. And at the back, the cargo bay, while not quite as deep as the larger Explorer’s, is just as wide and slightly taller. Seat backs up, there’s 33 cubic feet of cargo space. Fold ‘em and you’ll have a whopping 63 cubic feet to work with. That’s 50% more than a CRV or RAV4. Even the slightly bland front end styling says “big and bold”.

Pop the Escape’s hood, and you’ll find something pretty big there as well. Our XLT tester came with the Taurus’ aluminum, 3.0 liter, DOHC, 24-valve, DURATEC V-6. This muscular motor delivers a class best 200 horsepower. There’s also 200 pound-feet of torque on tap for towing up to 3,500 pounds.

However, this potent little powerplant can only be mated to a Ford 4-speed automatic transaxle. If you want to stir the gears yourself, you’ll have to drop back to this 2.0 liter, DOHC, 16-valve, ZETEC I-4. This cast iron block/aluminum head engine produces an able 130 horsepower and 135 pound-feet of torque and is mated to a Mazda 5-speed manual transaxle.

With the V-6-automatic combo we posted 0 to 60 times of 8.5 seconds and quarter mile runs of 16.4 seconds at 87 mph. Our drivers were impressed with the V-6’s broad powerband but felt the auto trans, while very smooth, had a tendency to bleed too much power from the engine during shifts.

Runs through our low speed slalom also revealed the Escape has some big SUV handling characteristics. The steering is nicely weighted and turn ins are crisp, but like larger SUVs, understeer is predominate. And, in keeping with its rugged image, the fully independent MacPherson strut front and multi link rear suspension deliver a firmer, more truck-like ride than the more sedan oriented calibration found on the Tribute.

Braking numbers, however, are much better than the big boys. As the Escape’s disc/drum configuration brought us to a halt from 60 in a respectable 132 feet. Our tester had standard ABS and Electronic Brake Force Distribution, which are optional on the base XLS. Do yourself a favor and make them standard on your list.

Another highly recommended option you should also make standard is the Control Trac 2 all-wheel drive system. With Control Trac 2, under normal dry road conditions the engine’s power is split 90 percent front/10 percent rear. Encounter slippage due to the wet and the system’s Rotary Blade Coupling clutch pack directs up to 50 percent of the power to the rear wheels. But, flip the poorly marked rotary switch from “auto” to “on” and the clutch pack locks up to a 50/50 torque split.

The Escape’s little-big theme is carried over into the interior as well. Our XLT came with the premium cloth-covered buckets that we felt could be a little less firm, and with more lower back support. With 7.8 inches of ground clearance, step in height is a little higher than some competitors. But once behind the wheel, you’ll find the effort worth it for a high, commanding view of the road. A tilting steering wheel is standard and it fronts a set of basic and easily read gauges. A well marked and easy to operate AM/FM/Cassette/CD stereo topped the Explorer-style center stack in our XLT. The rotary climate controls below are no-nonsense with air conditioning standard.

And like we found with Mazda’s Tribute, you’ll be pleasantly surprised at the Escape’s roominess for both you and all your goodies, both up front and in the rear. Where you’ll find plenty of room for two adults and, in XLT trim, a 60/40 split bench seat with reclining seat backs. XLS trim gets a one piece flip and fold bench and seat back.

With its roomy interior, strong V-6 engine, and swaggering demeanor, Ford has shown it’s capable of packing a big punch into a smaller sport-ute package. And should Hollywood ever remake the classic film, Little Big Man, we nominate the 2001 Ford Escape for the starring role.