Everyone knows that lightning is an electrical discharge from the sky. But the dictionary also defines lightning as “moving with remarkable speed.” And that’s just what this Lightning, the Ford SVT F-150 Lightning, was designed to do. When we tested SVT’s ‘99 Lightning, we said it moved the pickup truck into a whole new performance arena. And now for 2001, there’s an even more powerful bolt. So, are you ready for another shock?

Usually the answer to that question would be a resounding no! We don’t even like being jolted by an errant brush against a spark plug wire. But when that shock comes courtesy of a blast of horsepower and torque, accompanied by the high pitched whine of a supercharger, we say, “Bring it on!” And that’s exactly the kind of charge delivered by the new 2001 Ford SVT F-150 Lightning. And our reaction was similar to one produced by an electrical shock. That is, we found it very hard to let go of the steering wheel!

Internally, the Lightning’s power plant remains unchanged from last year, as does the 4R100 4-speed automatic transmission. So that extra boost in power comes from design changes to the air inlet system and manifold, and a more efficient intercooler. SVT engineers have also “shortened” the Lightning’s rear axle ratio to 3.73:1 from 3.55:1. And that means 0 to 60 romps in a quicker 5.4 seconds, and quarter mile blasts of 13.9 seconds at 101 mph!

Power hits like a sledgehammer, with maximum torque reached at only 3,250 rpm. But with the supercharger screaming and mufflers roaring, power is plentiful all the way to the redline. Your biggest challenge won’t be getting there. It’ll be getting there with the rear tires intact! And even after you arrive, you’ll still want to order a round of burnouts for everyone! And once the smoke clears, be sure to tell your environmentally conscious friends the Lightning is classified as a Low Emissions Vehicle.

But the new Lightning is about more than just burnouts and gobbling up the straightaways. It’s pretty competent in the corners too. The Lightning’s short-long-arm front suspension with coil springs and a 31 millimeter stabilizer bar, and the 5-leaf spring solid axle rear with a 23 millimeter stabilizer bar, is largely unchanged for 2001. But the addition of Bilstein shocks at all four corners has tamed the highway ride somewhat. And whether you’re at speed or running through a set of twisties like our low speed slalom, the Lightning sticks to the pavement like a leech on the back of your leg. The stock F- 150 recirculating ball steering system is precise, feeling slower than it is due to front push, but it has a fair amount of useful feedback. And body roll is so minimal it’s not even an issue. In fact, it’s only when you lose your self discipline and overwork the throttle that the back end comes around to greet you. And while most of the credit goes to the suspension, the large beefy 18 inch wheels wrapped in Z-rated Goodyear rubber also play a significant role in the Lightning’s high adhesion factor.

And that goes for braking too. As we hauled the Lightning in from 60 in 119 feet. The brakes are large 12.1 inch vented discs with twin-piston calipers up front, 13.1 inch solid discs and single-piston calipers at the rear. And of course, ABS. Our drivers were surprised at the lack of feedback coming from the brake pedal. No ABS feedback, no noise, nothing. But fade is nonexistent and stability first rate run after run. 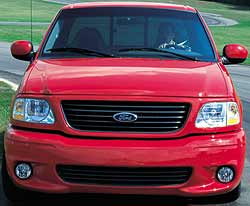 We think “first rate” also applies to the Lightning’s styling. With the new billet-style upper and lower grilles, the new headlight, and clear lens projector beam taillight design, the Lightning really looks like a cohesive design and not a truck with a lot of after-market add-ons. This is easily the best looking Lightning yet!

And remains a comfortable one too. Lightning’s interior is unchanged except for new sun visors that now include vanity lights. The comfortable, supportive, butt-gripping seats we loved in the last Lightning are still here. And so are the easy to use controls. Although a CD changer in the dash, rather than behind the seat, would be nice. And the gauges are a bit plain looking. But at warp factor nine with the scenery blurring, who’s looking at the gauges?

Cargo capacity is a measly 800 pounds; towing, 5,000 pounds. But if you’re buying a Lightning to make springtime mulch runs, you need to have your head examined. Besides, there wouldn’t be much left in the back when you got home anyway.

While the 2001 Ford SVT F-150 Lightning may not be the most workaholic pickup on the road, it certainly is the most fun to drive. What more could you possibly want from a hotrod hauler? So, when it comes to this kind of shock treatment, we say turn up the juice!