With all the rush to buy big trucks and SUVs, you might surmise that no one really wants a small car. Well actually, you’d be wrong. Some small cars are in big demand. For instance, last year Honda sold 318,000 compact Civics. The Civic is not only the most popular small car, it’s also spawned a new breed of “hot rodders” who actually spend more money customizing these front-wheel drive econoboxes than they cost in the first place. So when word spread that an all-new Civic is due, it’s a hot topic. Well for all those Internet chat rooms and Hondaphile web sites, the wait’s over. The 2001 Honda Civic is here! Honda is a tough company to pigeonhole. To the eye, their styling is definitely conservative, with each model more or less an evolution of the one before. However, under the skin, Honda tends to push the boundaries of mass production engineering. Such is the case with the all-new, 2001 Honda Civic. While the evolutionary sheet-metal was expected, there are a few big surprises that lie underneath. But, we’re getting ahead of ourselves. First the basics. The new American-made Civic is available in two bodystyles, a 4-Door Sedan, and a 2-Door Coupe. The Hatchback has been dropped. Trim levels for both include DX, LX, and EX, plus a high mileage HX Coupe. Everyone will know this is a Civic Sedan when they see it. It’s trim, competent, but now with body gaps so small that they almost disappear. However, even the casual gear head will note the 2001 version looks larger. That’s due mostly to the tauter, more European styling that is as much Volkswagen as Honda. These taillights certainly look familiar. Coupe styling is decidedly sportier than the Sedan thanks to a unique grille, a faster windshield, and oversized taillamps. On both Coupe and Sedan, the wheels now reside about as far towards the edges as they can go. And, that was made possible by one of the Civic’s major engineering surprises, a switch from double-wishbone front suspension to MacPherson strut. We can hear the Civic hot-rodders already crying “...say it isn’t so.” But, a closer look at the setup and we concluded that this is no ordinary strut and spring assembly. It has all the markings of a lightweight, race car design. Honda made this move for two reasons. First, to increase interior and trunk room. The Sedan’s people space grows by 1.6 cubic feet, to 91.4. Meanwhile, thanks to a lower profile rear double wishbone suspension, trunk space grows by another cubic foot, to 12.9. Combined, the greater interior space puts the Civic squarely into the compact class. The second advantage of the new front strut suspension is to improve crash worthiness. Honda designed the Civic to get a 5-star front crash rating for both driver and passenger in government safety tests. That’s a feat that no other small car has managed. Honda says its customer safety comes first, and we found even with new front struts, that the 2001 Civic doesn’t handle much differently from the last one. EX behavior benefits with a jump from 14- to 15-inch wheels and tires, yet more rubber on all models would be appreciated. The EX also has the plus of standard ABS brakes. All models use discs front and drums rear. But, for 2001, the front discs do grow substantially from 9.5 to 10.3 inches in diameter. ABS pedal modulation is fairly pronounced with a softer pedal than expected. Under the hood the changes are less dramatic but still significant. All Civic single- overhead cam, 16-valve 4-cylinder engines grow slightly, from 1.6-liters to 1.7-liters, yet they take up less underhood space. All engines are also certified for Ultra-Low Emissions in all 50 states, an industry first for Honda. DX horsepower jumps from 106 to 115, and torque from 103 to 110. The top of the line EX again includes VTEC-E variable valve timing. Horsepower stays put at 127, but gains 7 pound feet of torque for a total of 114. A smooth, efficient 4-speed automatic, and even more precise shifting 5-speed manual, are available on all models, except on the HX Coupe with its available CVT automatic. Besides an upgrade in space, the interior of the Civic Sedan looks like it moves up in style. Indeed, there is a lot of influence from the Accord in the slanted dash design. Getting settled in the Civic is easy thanks to a higher seating position and a standard adjustable steering wheel. Support and comfort of the broader front bucket seats are quite good. Side impact airbags are available. Logical operation is everywhere. The deeply hooded and larger gauges are clear if rudimentary. Rotary climate controls are mounted vertically near the driver. Air conditioning with an allergy filter is standard on LX and EX models. The operation is simple, although it’s now a longer reach for the passenger. Stereos are more centrally placed. The top unit on the EX includes a single CD player, with space below to store up to three disc cases. 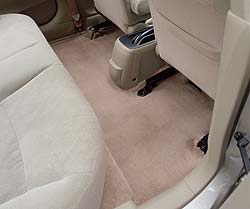 The place you notice the increase in interior room most is in the rear seat. Here the Sedan’s now flat floor expands leg room by almost 2 inches, and is now within 2 inches of the Accord. A lockable, split folding rear seat is standard, as is the LATCH/ISOFIX child seat restraint system. But, one of the best things about the 2001 Civic is that, despite all the improvements, prices are up only modestly. The manual DX sedan begins with a base price of $13,400, while the EX automatic goes out the door for $18,150 . Coupe base prices range from $13,200 for the DX manual, to $17,650 for the EX automatic. In the case of the new Civic, you don’t need x-ray eyes to appreciate the larger interior, and more refined driving character. And you don’t need a crystal ball to know that the 2001 Honda Civic will retain its small car crown.