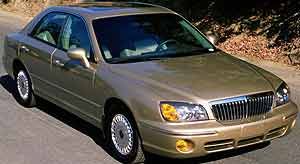 Although in business since 1967, it wasn’t until 1986 that Hyundai Motor Company introduced its first car to the American market. It was an affordable subcompact called the Excel, and it did just that. Setting an industry record by selling nearly 169,000 cars in its first year. And while the Hyundai lineup has changed considerably since then, its emphasis on building low- buck, high-quality cars hasn’t. Until now that is. This new XG300 sedan has its sights set squarely on the likes of Acura’s 3.2 TL and Nissan’s Maxima, and a host of domestic competitors. But is America ready for a high-brow Hyundai? After spending two weeks with the new 2001 Hyundai XG300, we think the answer to that question is an unqualified yes! And the XG300 has the goods to back us up and to be a serious contender for those looking for an affordable near-luxury 5 passenger sedan. Starting with looks. The XG300 styling is handsome, if a little toothy in the grille. Projector beam headlights and fog lamps are both upscale features, as is the frameless door glass which still allowed a very quiet interior. At the rear, a bit of chrome sets the tone, as the look is fine if unstirring. The long list of standard interior amenities got our attention more. Leather trimmed power adjustable front seats for driver and passenger, adjustable lumbar support and side impact air bags. The driver faces a tilt steering wheel, a legible and informative gauge cluster, aided by a trip computer. And in the center stack, an easy to operate AM/FM stereo with CD player and comprehensive climate controls for the fully automatic air conditioning with large vents, front and rear. 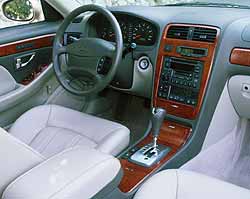 The center stack and leather-wrapped Shiftronic manumatic shifter are all surrounded by tasteful faux wood trim. You’ll also find plenty of room for CDS and other stowables. While in the rear there’s more head and leg room than most competitors. The 60/40 split folding seat quickly expands the XG’s already spacious 14.5 cubic feet of trunk space. Slightly smaller than Maxima, slightly larger than TL. But the standard accommodations feature list doesn’t stop there. There’s also power windows and mirrors, cruise control, intermittent wipers, and remote locking! Unlocking the XG300 on the road is by way of a 3.0 liter, DOHC, 24-valve, V-6 dubbed Sigma. It spins out 192 horsepower and 178 pound-feet of torque. This cast iron block/aluminum head six is smoothed by a tuned balance shaft, hydraulic engine mounts, and a variable intake system. Although not as potent as the V-6 powerplants found in the TL and Maxima, the XG turned in a respectable run to 60 of 8.5 seconds and a quarter mile time of 16.5 seconds with a speed of 86 mph. Despite a weak launch, there is plenty of power in the mid-to-upper powerband range, reflecting the XG’s torque peak at 4,800 rpm. The adaptive 5-speed automatic transmission, however, always delivers consistantly seamless shifts. The manual mode did little to enhance performance, but it is more fun to use. Standard traction control modulates wet road wheel slip. Out on suburban roads the XG300 offers up a full-size family car ride. The fully independent suspension, with double wishbones in the front, multi-links in the rear, and gas shocks at the corners, is quite softly sprung. Yet, even if the XG300 is a bit floaty for us, sharp bumps and broken pavement never upset the competent chassis. In fact, the front shocks feature special low velocity control valving to aid solidity and high speed ride control. There are anti-roll bars at the front and rear too. The XG’s solid response was even more evident in our low speed slalom. There is considerable body roll and the rack and pinion steering is a little slow to respond to repetitive maneuvers. But handling is quite neutral until the XG300 is pushed to its limits, where understeer increases quickly. Still the rigid chassis kept the XG300 stable and firmly planted throughout our test. Aided too by the Michelin MXV4, 65 series 15 inch tires, another quality feature, mounted on aluminum alloy rims. Stable also describes the XG’s braking manners. The standard 4-wheel disc, 4-channel ABS system delivers stops in an uneventful and reasonable 128 feet. Our drivers noted a rather soft pedal feel and a fair amount of nose dive, but the big Hyundai tracked straight and true. But the biggest truth for most XG onlookers will be pricing. Base sticker on the 2001 Hyundai XG300 is just $23,499. Throw in carpeted floor mats and a cargo net, and you’re out the door for $24,050. About the same as a Nissan Maxima SE, but $4,500 less than an Acura 3.2 TL. But wait, there’s more. Throw in the Hyundai Advantage with its 5 year/60,000 mile bumper-to-bumper and 10 year/100,000 mile powertrain warranties, and the XG’s overall value beats all comers. So, are you ready for a high brow Hyundai, America? Well, we are, and with Hyundai racking up extremely impressive sales numbers even before the XG300 arrived, up 49% last year alone, we think you’re already shouting your answer.